Bike-Partisan Thinking on City Budgets, Land Use, and Transportation 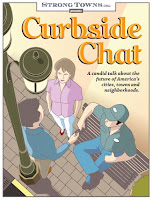 With the City's budget meetings and conversations starting next week, here's some interesting reading for Salem citizens and staff.

But first a reminder!

The City is holding meetings to talk about the budget:

In reading and rereading Jane Jacob's Death and Life of Great American Cities, I am repeatedly struck by a strand of deep, considered, and rather complicated conservatism in her writing. It is fertile and provocative, quite the opposite of the sound-bite excesses on both the Left and the Right.

Curt pointed out this group of conservative Midwestern fans of small towns who started a non-profit substantially rooted in, as I see it, a reading of Jacobs that draws on this conservative strand in her thought. Extending a refusal of the over-simple, their analysis also evades easy cliches from the Left and Right: The Strong Towns material is thoughtful and fascinating stuff!

In the logo and image you can see some nostalgia for main street Americana here, but the mission is a hard accounting of budgets and spending:

Our expectation of plenty, and our expectation to pay only a portion of the full cost of growth, has led to a scarcity of resources. Our approach to land use now constrains us, growing our financial commitments at an alarming rate. It threatens real American prosperity with long-term economic stagnation and decline.

We can do better.

Announcing Strong Towns, a nonpartisan, nonprofit organization focused on the root of these systemic problems: our land use patterns—the way we have designed our towns and neighborhoods.

They've put out a report called Curbside Chat: A Candid Talk about the future of America's Cities, Towns and neighborhoods. Introducing the report they say,

We often forget that the post-World War II American pattern of development is an experiment. We assume it is the natural order because it is what we see all around us, but our own history—let alone a tour of other parts of the world—tells a different story.

While the United States has sustained economic prosperity for two generations, today the economy is stalled....It is time to ask whether this experiment is really working.

What we have found is that the underlying financing mechanisms of the “suburban era”—our post-World War II pattern of development—operate like a classic Ponzi scheme, with ever-increasing rates of growth required to sustain long-term liabilities. Cities and towns benefit from a growing tax base associated with new growth, however they also typically assume the long-term liability for maintaining new infrastructure.

Here are bike-partisan thoughts about walking and biking:

An essential part of making traditional neighborhoods (the places where we have the greatest public investment in infrastructure) more attractive to private sector investment is to physically reconnect them to destinations like businesses, parks, gathering spots and other neighborhoods. All cities need to perform a walkability study to determine areas of low and high connectivity and where they can get the highest rate of return (induce the most value and private-sector investment) by improving nonmotorized connectivity.

As an example of the return in value, consider a family that wanted to relocate to a traditional neighborhood and, due to great walkability, could get by with only one car. That family would save an estimated $7,500 per year on transportation costs. If instead of spending that money on transportation, they could invest it in their home, they would have (at 6% over 30 years) an additional $103,000 of purchasing power. That is tangible value that can be captured in our development pattern.

We almost always use the ease of automobile travel as the top design criteria for the public realm. To improve the overall financial productivity of these neighborhoods, we need to accommodate the automobile, but walkability needs to be the primary design criteria.

I had not thought to compound the savings from ditching a second car: Ditch a car, gain $100K over the life of a mortgage! That's a non-trivial message. At the same time, while they critique a "ponzi scheme," they are not also "no growth" or "steady-state" thinkers. It's a provocative blend of ideas, aiming at a kind of truly sustainable growth.

If Salemites are not comfortable modeling themselves after larger and more urban environments like Portland, New York, or Amsterdam, or even university towns like Corvallis, Eugene, Davis, and Boulder, maybe in the midwestern Americana of the Strong Towns analysis there are resources and models? (And it's not like these urban centers and university towns aren't also facing their own budget crises.) Take a look and see what you think!
Posted by Salem Breakfast on Bikes at 7:00 AM

Word. A huge portion of what little economic cushion we enjoy in our house is due to only having had a 3-cylindr second car for a very brief period and not driving it much, and then selling it for about what I bought it for. All the rest of our marriage has been with one car only, and the gain is huge. From my spreadsheet kept since day 1 of ownership of our latest used car, September 2003, I know that the 55000 miles we've driven have cost us 51 cents a mile. If we drove anything like the average, we'd enjoy a much lower per-mile cost, but a much greater outlay overall.

The carburbia era is over, killed by its own "success."

If "carburbia" is over, how come no one's noticed?!

Meanwhile, a 60 unit project just announced for Portland will be named after a bicycle and have a car:bike stall ratio of 12:91 or 1:8!

I know Salem doesn't want to be like Portland, but still how is it that the sensibility of the two towns, not even an hour apart, is so disparate? Salemites go to Portland all the time! The internet makes the transmission of ideas so quick and easy! And yet here Carburbian Autoism is in full force. (And it's not like Portland's done with Carburbian Autoism, either.)

Anyway, it's good to know your empirical data confirms your savings!