The Proposed Minto Bridge in Floodtime

So far the City's discussion of the proposed Minto Bridge and high water has been pretty academic. Oh, sure, there are winter high water flows, but what about a real flood? Well, we've got a flood. 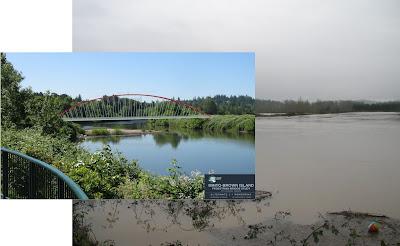 (click to enlarge)
Here's a pretty close composite of a summer view with the proposed bridge and a winter view of the flood. The matchlines are very close (check out the faint outline of the crane at the Meridian, which you can see complete below) - call it 95%, maybe even a little better? I didn't quite get enough on the left side, so I overlapped the summer image. In the lower-light gloom, I also had to take the photo with the camera on the railing rather than above it, so the near-side vegetation is a little off - but it's the same set of brambles! It's close enough to give you the idea. 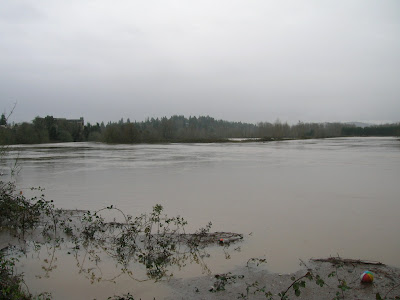 So unlike the Union Street Railroad Bridge path system, which is still quite a bit above the floodwaters, and appears to have been high enough to stay above both the 1996 and 1964 floods (but not the 1890 and 1861 flood levels in the pre-dam era), the Minto bridge won't connect to land in any meaningful way during floods. And maybe even during regular "high water" it won't be usable. 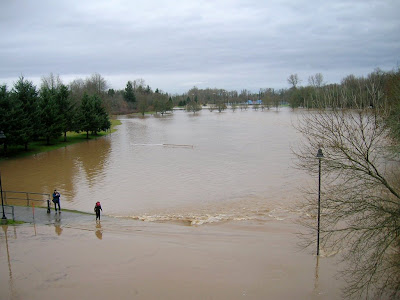 These are not arguments not to build the bridge. No one says, "look, the soccer and softball fields are underwater! The fields are useless; what a waste of money!" No one says this, or if they do, they are laughed away. It's not a serious argument.

Mostly I still think the similarity shows we are better off thinking of the Minto Bridge as more a recreation facility than a "transportation corridor."

Still, this part of the argument is not as clear as I have supposed. The bridge on State Street where it crosses Mill Creek, between 21st and 19th Streets, flooded; the bridge from River Road to Independence is often closed for high water in the bottom land. So periodic closure for high water does not by itself disqualify something as a "transportation" facility.

But the flood is a reminder that the Minto bridge and path doesn't make connections on any side of the key triangle of homes, jobs, and business. It's a park-to-park connection. It's a recreation facility.

And the crowds on the Union St. Railroad Bridge, most of whom had driven cars to Riverfront Park, just made me wish the City would focus on improving connections to the Bridge across especially Wallace Road and Commercial, and give more thought to connections across Edgewater and Liberty. People should feel free to walk and bike to the bridge, not just drive and park.

Here are two images based on what I believe is the flood level accurate to within 6 inches. The calculation is still uncertain, and I am waiting for confirmation from the City. Still, it passes the sniff test. Correlating the pre-1966 flood gage, which is still in use, and gave a reading of 29 feet during the peak, and correlating it to the 1988 NAVD (vertical datum), I calculate a flood elevation of about 138.5 feet, several feet below the 100-year mark.

The second image shows the entire proposed Minto path and you will want to click to enlarge it. It will show that nearly all of the path would be underwater.

This might be the easiest way to summarize my calculations. 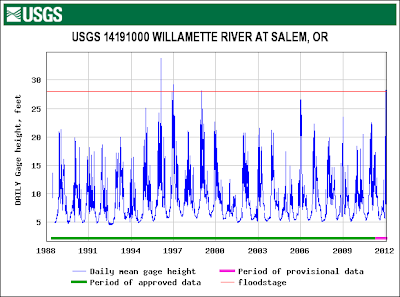 I wish the City would discuss this openly, though. I think it's reasonable for citizens to want to know how often they should expect not to be able to use a +/- $7M facility.
Posted by Salem Breakfast on Bikes at 12:01 PM

A thought occurs to me that I did not see you point out. If the land on the other side of the river is not accessible in a "40 year" flood event, then does the bridge even need to be as tall as that. It seems that the cost of the bridge could be reduced by lowering it even further than already proposed to a level that would still be a usable connection into Minto Park. That may however bring it do a level where it would be flooded as well during those times, thereby not allowing it to be used as a place to watch the flooding.

Well, that's an interesting question, and perhaps I should have discussed it directly.

I don't know all of the considerations, but certainly a part of them are Federal 19th century river navigation laws and the need to keep the channel "open" for the Willamette Queen, whose operator enjoys a great deal of leverage on the issue. It has seemed highly unlikely that the Coast Guard or other Federal agencies would ever approve an even lower bridge. (The approved design is called the "low bridge" design, btw.)

For a summary of the issue, links to the staff report with a fuller discussion, and the way it was resolved, see previous discussion here.

From the City: "the flooding in 1964/early 1965 was very extreme. The stage height of 37.8 feet [in the 1964 flood] uses the exact same scale as was used for the flood event we just had and no conversion is necessary." So I am using 29 feet in my calculations.

I assume that the bridge drawings use the 1988 NAVD, and I am now pretty confident in the 138.5 flood elevation figure.

IN the SJ today:

"Minto-Brown officially was closed from the day of the flood through Jan. 30, and has been reopening only incrementally since then.

"The park is 75 percent clean and open to the public," said Salem parks superintendent Keith Keever."

So there is in fact a lag between the waters receding and the path system reopening! Maybe closures are measured in weeks rather than just a few days?

Well. Friendly correspondents who just returned from a walk at Minto park report that large portions of path system are under water or closed again. Since the 17th the Willamette has been a little over 20 feet in elevation.

As for the accuracy of the path elevations, the City reports that the numbers came from a GIS layer (in turn from aerial photos and whatnot), and so represent a level of accuracy that needs to be confirmed by actual on-the-ground surveying. It's hard to imagine, though that the margin of error is much more than 5% or 10%.

The SJ is reporting a floodwatch this afternoon.

It will be very interesting to learn just how much of this winter and now spring the path system would have been open and securely above water.

From the City today:

"Minto Brown and Wallace Marine Parks to Close - 02/14/14
The City of Salem has closed two Salem Parks due to Willamette River levels.

Both parks will remain closed until the Willamette River returns to normal levels."

24 feet seems to be the magic number!