Do you live in the SCAN neighborhood? Wednesday, the 11th, at 6:30pm in the South Salem High School library, the South Central Association of Neighbors will discuss both the Bike Plan Update as well as the Hospital's plan for the Blind School.

Both have important implications for north-south connectivity, especially to and through downtown! 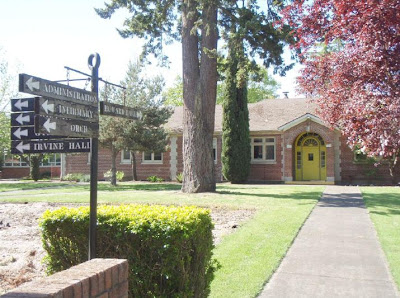 You may remember the discussion of the Blind School parcel (here and here) and the Hospital's plans to put in a parking lot. The demolition is now complete, and Howard Hall's been retained, but there are still plans for a parking lot, and it's not yet final where the lot will empty and how the expected auto traffic will impact Church and Winter Streets.

Bike and Walk Salem identifies an urgent need for Church Street to handle more bicycling and walking traffic as a tier 1 project (in red) - not a need for it to handle more car traffic. The Bush Park - Gaiety Hill Historic District has also identified Church Street as having an important historic character, not consistent with high traffic volumes.

But one reason the Hospital could be looking to Church Street (lower left on map, with Blind School parcel in green) is that Willamette's longer-term plans call for closing Winter Street to car traffic between State and Bellvue. That could be terrific. 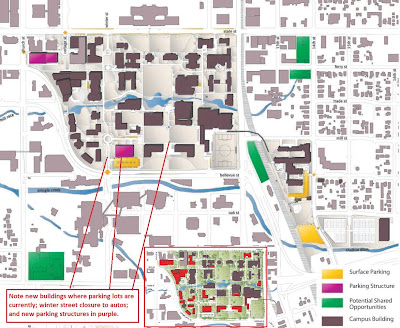 But that could also impact the Hospital: With a Winter Street closed to cars north of Bellvue, access to State Street east-bound from the Hospital could be an issue. (Though Bellvue offers a light and a left hand turn lane at 12th, with connections to State Street.)

Because Willamette and the Hospital are aggregating smaller blocks into superblocks, movement may be bottlenecked and funneled, and through-mobility for all modes increasingly problematic. There's a complex relationship between institutional needs and community needs, and hopefully we can all find a good balance.

It will be important to see how the Hospital plans on using the Blind School property and what are their plans for the parking lot. Hopefully they will also see the importance of active transportation in light of increasingly urgent public health problems, like obesity and diabetes rates, and will recognize the importance of Church Street for north-south connectivity.

But as we all wait to see the plans, and as we press for action on Bike and Walk Salem, Church Street needs fans right now. Doug has argued improvements to Church Street should be one of the three highest priorities for the City, and a big parking lot would hinder that. So if you live in the neighborhood, consider attending the meeting.
Posted by Salem Breakfast on Bikes at 7:00 AM