A High Wheel at Mission Mill Show on Women's History

It was great to see an old bike on the front of the "Arts and Life" section of the paper today! 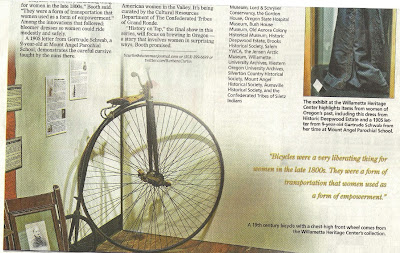 In a note about the new exhibit at Mission Mill*, "Willamette Women: Our History is our Strength," Barbara Curtin quotes Director Peter Booth about the bike:

"Bicycles were a very liberating thing for women in the late 1800s," Booth said. "They were a form of transportation that women used as a form of empowerment." Among the innovations that followed: bloomer dresses so women could ride modestly and safely. 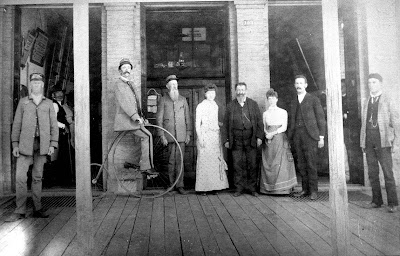 Focusing on the high wheel, or penny farthing, is exciting, because it is obviously old and different. History! 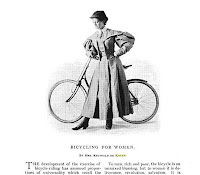 But perhaps to nitpick a detail, it's not the best representation of women on bikes.

It was the mid-1880s introduction of the safety bicycle, the diamond frame geometry with equal sized wheels that we know today, that really made bicycling possible for women. Sure there were a few lady riders of the penny farthing, but riding that was more like an "extreme sport" than a potentially liberating form of transportation. Riding the high wheel was too much trouble to catch on very widely.

For both men and women, the diamond frame was much more practical, and this practicality made the bicycling craze of the 1890s possible and turned the bike from a stunt bike of endurance and tricks to an important form of transportation. 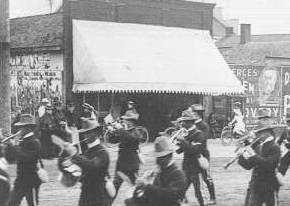 And we see this in the images of suffrage activists and other women on bike: Most often they rode the safety bicycle, with two equal sized wheels, and not the high wheel.

Note the women on bike in this detail from an image of a marching band on State street in the very early 1900s.

So I want to suggest that, unless this particular high wheel can be tied personally to a particular woman in the Willamette Valley and her bicycling activities, using a high wheel to talk about women's suffrage and emancipation is somewhat misleading and not the best way to talk about actual bicycling and women's history near Salem.

More entertainingly, here's a short clip of a drill team in 1899!

Image from "Bicycling for Women" in Cosmo, 1896! See also Francis Elizabeth Willard's 1895 book, A Wheel within a Wheel: How I learned to Ride the Bicycle.

* Or the "Willamette Heritage Center at the Mill," if you insist.
Posted by Salem Breakfast on Bikes at 6:00 PM

According to a personal communication from the grandson of Otto J. Wilson, John Wilson, there is reason to think the penny farthing was Otto's. More on Otto J. Wilson here.

This a belated update, but here's more on Ben Taylor and his bicycle, including notes on the building where he's photographed.