Boise and the Grid: The Island of Pringle Square and Connection to Downtown

In a nutshell, if the Boise Project is supposed to be part of increasing density downtown, part of making a more vibrant downtown, the Boise Project's natural connections may not have anything to do with downtown. Without truly multi-modal improvements to connectivity with downtown, it may be easier for residents and employees to drive elsewhere than to walk downtown to shop and dine. 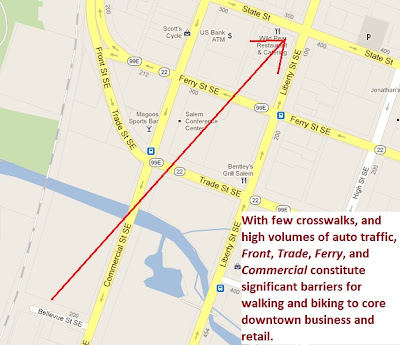 The one-way grid, the highways, parkways and by-pass, the major arterials, and the railroad all conspire to isolate the Boise parcel behind a formidable transportation moat. In important ways it's really an island.

With the liquor store and the Conference Center as the first major "destinations" along Commercial Street to the north, the straight-most shot to downtown isn't exactly full of walking attractors. 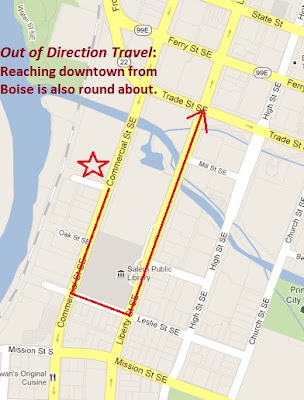 Even by car, it will be isolated. The plans call for measures to discourage using the Civic Center drive-way as a cut-through. Consequently, access to downtown will require a detour of several blocks as well as a left-hand merge across several lanes of busy traffic. 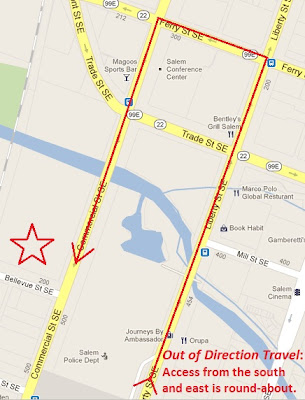 Folks wanting to reach it from the south may just give up, and continue north.

The plan's path system along Pringle Creek will be lovely, but this system goes east-west and connects to other pieces of the park system, not to business and commercial areas. The paths are also not well suited for bike transportation.

Even with the most sylish of design and a restaurant and fancy grocery store and offices - even with the best case situation, you still have to ask: How do you get people to and from the site easily?

Staff concurs that the design complements surrounding development in the area such as Civic Center, Salem Conference Center, Phoenix Grand Hotel, and The Meridian.

Oh boy. If ever there was a situation that called for a design in contrast to the surrounding development, surely this is it! These are not buildings from which you want to take style cues.

Comments on the Statesman's article have highlighted general dissatisfaction with the design and hopes that the City might get a more stylish building.

Over at HinesSight, Brian uses stronger language, saying it is "ugly, unwanted, uninteresting."

Oh, man... just what I didn't need so early in the new year -- another reason to be depressed about the prospects of Salem, Oregon being able to ditch it's well-deserved nickname, So-Lame....

Now, no talk of condos, restaurant, or hotel. The "mixed use" side of Pringle Square reportedly is to be such wildly unexciting businesses as insurance and medical offices. This isn't what people in Salem envisioned when the city worked out a deal with the developers back in 2007....

What a waste of prime riverfront property. Nobody is going to want to visit Pringle Square to peer through the window of an insurance office, dreaming of how cool it would be to walk in and talk about a multi-car premium discount.

CB|Two can certainly do a more interesting design, so it is probable the client is driving the design in a more institutional and generic direction.

The fact that offices, which will likely close at 5pm, just like the Civic Center, are envisioned as the main piece in addition to residences, means there will be no commercial destination open in the evening and on weekends. The lure of multiple uses and several distinct pulses of people throughout the day will remain incomplete and unfulfilled.

But a significant part of the problem is caused by the need for parking. On the Commercial side, people on the sidewalk will face the ground level parking garage; on the creek side, people will face the basement level parking garage. (The Civic Center and its pond on the north side show the same difficulty with concrete walls and a parking garage.) In neither case will there be an attractive system of retail storefronts to encourage strolling and a more permeable edge condition. (Is flood control part of this?) Instead there will be hard borders.

At walking-level, the proposed building is a little too bunker-like.

Fortunately one of the conditions proposed by staff addresses the blank wall on the creek side and requests "a pedestrian access." But still - how attractive is the blank wall, even if you can walk by it? And, again, the commercial space is envisioned as offices rather than retail or restaurant.

Together, the ensemble is on the dull and lifeless side.

There's also the nagging question about the disposition of the railroad crossing on State Street at the entry to the Carousel.

The current site plan appears to skirt the issue artfully. Phase One includes a stub connection to Phase Two that passes underneath the trestle. 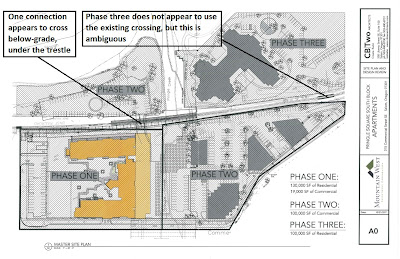 What I think is the existing driveway and crossing is shown on the concept drawing of Phase Two and Phase Three. Given the Railroad's unwillingness to entertain new crossings, hopefully the design can eliminate the need for one and retain the Carousel's main entry and direct link to the Minto Bridge.

For comparison, here's the old site plan and proposed traffic circulation plan. It really would have insisted on disconnection to the downtown center. 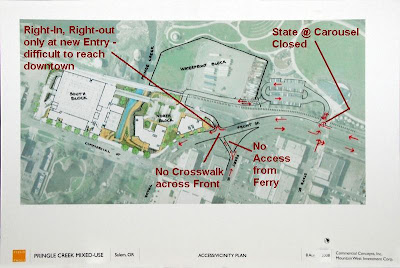 Even without the Great Recession the Boise project would be a challenging one. The street grid conspires to make connectivity difficult, and the proposal is too much driven by cars and their needs. So much of the development is shaped by transportation.

I don't know that there's an easy way around this, but I hope that the project can be refined and improved. There needs to be a bigger focus on connecting to downtown and making it easy for people to walk and bike the few blocks naturally, without undue effort. It would also be nice to have a richer set of retail and restaurants, with some real destination business to create a wider pattern of people using the area.

At the same time, it's also true that perhaps we pile too many expectations onto a single project - by itself this will be a well-designed project or not, but by itself it will not determine the course of downtown.

Still, this should be a showcase development, and right now it's too pedestrian - in all the wrong ways.
Posted by Salem Breakfast on Bikes at 11:15 AM

Yesterday in a tweet, SJ reporter Timm Collins observed that the Prescott Apartments in Portland were "similar to Pringle Square (Boise Cascade)." He cites a Daily Journal Commerce piece, but Brian Libby's piece that also discusses two other projects is even better for the purposes of comparison.

The Claybourne Commons project is interesting because it shows a similar facade vocabulary - the angled shed roof elements and alternating bays and colors.

Collins' comparison, with the Prescott project, is maybe even more interesting - but because of dissimilarity, rather than similarity, though it is a similar size, about 1-1/2 times bigger. The rendering of the Prescott building shows direct links to light rail on Interstate Avenue and plentiful ground floor retail.

It is not a bunker at walking level and it connects directly with a rich multi-modal transportation nexus. The differences are important!