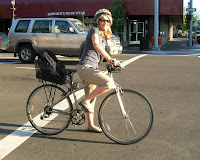 So the last time gas was $4 a gallon, it seemed like there was a bump in bicycling in Salem. Are we headed there again this summer?

In the intervening years, with gas a bit cheaper, and with fewer jobs to commute to during the Great Recession, bicycling hasn't seemed to be growing. Last year was no different.

For four years now, volunteers have gone to key intersections around the city and counted bikes during rush hour. Last summer, thanks to 7 volunteers, at 9 locations scattered around the city we performed 17 counts.

The overall pattern didn't show growth. The decline is concerning. Other cities show increases. So does this tell us that the true, city-wide level of bike commuting is down? It is hard to be certain, but surely we'd see signs of growth at key gateways. But we really don't.*

So I do think it tells us is that bike commuting is not growing in any significant way. I think that is a valid conclusion. 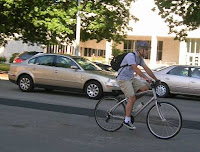 And it should not, really, surprise us: The City has not constructed any new big bike facilities since the sharrows went down on Commercial and Chemeketa in 2010. In Portland's recently released 2011 numbers, new neighborhood greenways show dramatic growth:

At the 11 newly-developed neighborhood greenways (a.k.a. bike boulevards), PBOT recorded a jump of 61 percent.

The City has not undertaken anything remotely similar. What they have done is legacy remediation by adding bike lanes to busy arterials and collectors. And from bike lanes on busy roads we would not expect to see dramatic increases in biking.

With four years of bike count data, if rates were growing, we should be seeing it. Since we do not, it seems clear that if the city wants to improve bike commuting rates, it needs to get serious about new infrastructure for people who bike.

In the bike plan under consideration at the Planning Commission, the current goal is for a mode split of 3% by 2020.

But to meet the Oregon Statewide Transportation Strategy's targets, getting to 3% in 2020 and 5% by 2030 will not be enough.

With the budget crunches at the City and at ODOT, and with Federal spending likely to look different in a new Transportation bill, we will want to ask ourselves about efficiency - and there is no more efficient investment in transportation than bicycling!

* The sample size this year is small. Participation in the count project last summer was down, in part because we didn't hold a kick-off training session, and with only 17 counts total, it's really hard to draw certain conclusions. But you you'd think you'd see consistent growth on the most attractive routes, like Chemeketa for example. And we just don't see growth even on this restricted scale. (It's also an argument that more needs to be done on Chemeketa, even, for making "interested and concerned" cyclists feel comfortable and safe.)

Thanks for sharing this info.

Yes, Salem's strategy of adding bike lanes may help those who are already biking, but to bring in NEW riders - this town needs a new strategy.

Cycle tracks give the 'interested but concerned' the space they need to go-by-bike. They also give parents (like this Mom) the space needed to confidently travel-by-bike with children.

On another note -- aggressive plans to increase ridership through the development of quality infrastructure could be considered both transportation policy and an effort to fight obesity in Oregon.

Great insights, Angela. Bike boulevards, cycle tracks... anything to open up access to large areas of town to less demanding and aggressive traffic.