About 50 people met last night in the South Salem High School library to talk about the Hospital's plan for a parking lot on the Blind School property. It was cheering, as neighbors with multiple backgrounds and interests all expressed general support for walking and biking. 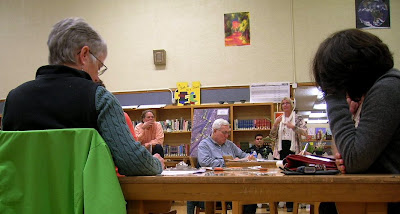 As one of the items on the agenda was the contentious proposal for a connection between the Fairmount and Candelaria neighborhoods, I was not expecting a broad consensus, and indeed neighbors did disagree on some details when folks drilled down. But go up a level and folks were nearly unanimous in supporting facilities for people who walk and bike.

One woman who lives in the vicinity of Leslie and Church, across from a proposed driveway location, proposed to bar driveways on Church, funnel all traffic onto Winter, and eliminate the bike lane on Winter to accommodate more traffic on Winter. Well, I don't think that is a good idea. But she also expressed a strong interest in making walking and biking mobility a priority on Church Street.

Alyssa of the Governor's Cup talked about close-in neighbors shifting short trips in cars to trips on foot or on bike, and presented a list of downtown businesses in favor of improving biking and walking connectivity to downtown. She highlighted this mode shifting as a way to better utilize downtown parking stalls, so that people from farther away or those who needed to drive would have an easier time finding a spot.

Curt from Kidical Mass talked about active transportation as a public health issue and suggested that the Hospital might have better ways to meet trip-end demand than simply building more parking. If the 300 stalls represented a small proportion of total demand, than transportation demand management strategies might be a better focus than construction of a new surface lot.

Ed of the Leslie neighbors coalition read a letter he entered into the minutes. Living on the south side of Mission, he spoke about connectivity not just between Bush Park and Pringle Park, but of critical connectivity to downtown for all of south Salem. If folks aren't comfortable on Liberty/Commercial or on High Street, Church Street is the only way into downtown. It's certainly the most pleasant.

Bob talked about the role of design in getting to solutions that work for everybody. Afterwards I spoke briefly with the designer, Chris of CB|Two, who seemed genuinely interested in finding a design solution that was sensitive to neighborhood and city needs while also accomplishing the goal of his client.

Director of Community Development Vickie Hardin Woods (pictured at top) addressed the group and representative from the Hospital and conveyed an invitation from the City Manager and Mayor to meet for a conversation. She conveyed the hope that the City might be able to broker or otherwise assist in a compromise that would work for everyone.

At the end of the meeting the board voted unanimously to support resolutions calling for a greenway concept that prioritized active transportation with no driveway on Church Street; and supporting Bike and Walk Salem and the conceptual plan (without specifying detail!) for a connection between the Fairmount and Candelaria neighborhoods.

Were you there? What stood out for you? 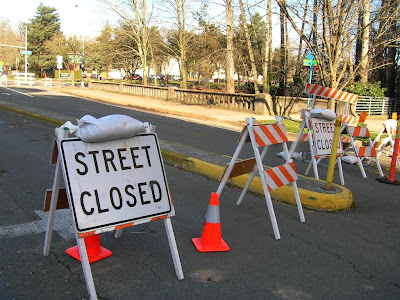 A subtext and potential problem with making Winter the only driveway is the apparent structural damage to the Winter Street bridge across Shelton Ditch. 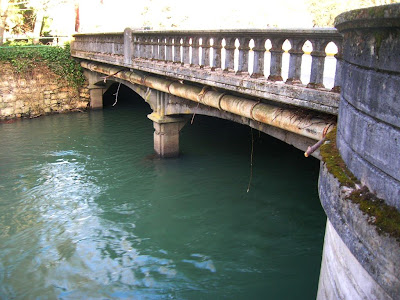 On the west side, the downstream side, you can see sticks swept into the crack between the pipe and the bridge deck. It's also possible there's some undermining, cracking, or other structural problems. The east side, upstream, has even more crap stuck in the bridge. I think I have heard a preliminary guesstimate of $8M or so to repair it. As a representative from the Hospital said, the bridge is expected to be closed to auto traffic for a while.

At least until the bridge is repaired, it's hard to imagine a situation where the parking lot's only driveway is on Winter. But because of emergency vehicles, it's also hard to imagine that the bridge, with connections to Pringle Parkway, won't get some kind of priority for repairs - of course with budgets, hopefully this doesn't mean it gets fixed in 10 years rather than 20!

So hopefully the bridge closure doesn't become the reason requiring a driveway on Church.

And remember: if the bridge is closed to cars and trucks, it's still open for people who walk and bike!
Posted by Salem Breakfast on Bikes at 7:00 AM

There was core support for the Salem Greenway project, but I was disappointed that Salem hospital personnel weren't given a chance to address the many ideas and concerns of both neighbors and greenway advocates. You mentioned speaking with the architect, I spoke with Martin Morris of the hospital foundation about how some of their plan proposals were really not in conflict with the preservation of the greenway. A lot of neighbors seemed concerned with slippery slope consequences of what the development would bring, and would probably oppose whatever the hospital brings to the table. It is important for more people to come to these meetings to engage in pragmatic and productive dialogue for the sake of everyone involved. Seriously, that was the biggest turnout SCAN has seen all year, normally only a dozen or so are there to deliberate the affairs of our entire neighborhood.

I'd like to see and hear more about the Hospital's plans, too. Obviously, I am sceptical of the genuine need for more surface parking lots; charging for car storage would allocate the parking stalls more efficiently than just building more free parking, for example - there's a market failure here.

At the same time, there's a small historic irony here: Oregon's greatest bridge builder - a titan of traffic engineering! - lived at 651 Church Street, and many have conjectured that the cast concrete bridges in Salem, like the one on Church Street over the confluence of Pringle Creek and Shelton Ditch, were designed under his influence.

Zooming out a bit, the superblocks, which constrain both north-south and east-west travel here by quite a bit, are big structural problems for the whole south end of town, and a complex conversation between neighborhood, hospital, and city is necessary to land on an effective compromise.

So just as you say, hopefully lots of people get involved in the conversation!