One of the issues with the Blind School lot, and the Hospital's plan to develop it, is the question of edge conditions. The neighborhood has suggested a sort of triangle for structure: Along Church Street low buildings, low intensity activity, and greenscape should be the predominant note; building height and activity should slope upwards to meet the mid-rise and more intense kind of development in the hospital towers and buildings on Winter Street.

Edge conditions, the way development borders on the edges of contiguous or otherwise neighboring development, whether public or private, is very important. 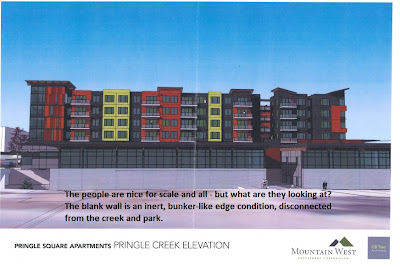 As I have thought about Pringle Square, I am more and more sure the key is the street and sidewalk level connections. As presently designed, they will be inert and blank, barriers rather than invitations and activators.

The surface forms, texture, and coloring of the facade of Pringle Square will be important, but they are style more than structure. The structural elements at the walking- and street-level are much more critical and will shape the essential nature of "how the building works" in relation to downtown, Pringle creek, and Riverfront Park. 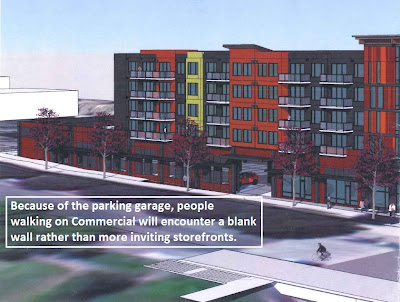 The border along Commercial will be the concrete bowels of a parking garage. Some of it may be glazed with frosted glass or something, but there won't be any activity. Nothing inviting for people walking who don't already have a car there. It will be sterile. It will passively endure passing, and through-movement, but will not encourage active interaction or invitation into the building. It won't be an attractor at street-level. 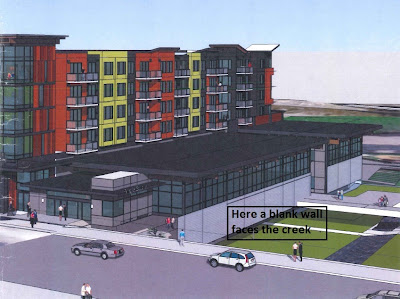 The wall along the creek will be even more imposing: A vertical slab of concrete or something like it.

Contrast this with the edge conditions at another of CB|Two's buildings, Broadway Commons! Here's an aerial with the garden, patio, and amphitheater. 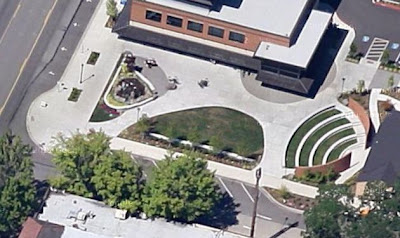 And here's a twilight view. The edges are permeable and active! 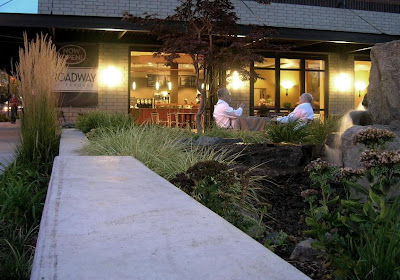 Waterplace and Orupa also have active edges. People can see things, inviting things, as they walk by. There are reasons to explore the edges, and reasons to go in the building to explore.

In a three-part series "Can a Broken Urban Park Be Fixed? Portland’s O’Bryant Square," SERA Architects* writes about a dysfuntional park whose problematic elements are structurally very similar to what is proposed for Pringle Square. I'm not prepared to say the Pringle Square will be dysfunctional, but I do want to suggest there are flags to which the public and City should be more attentive. 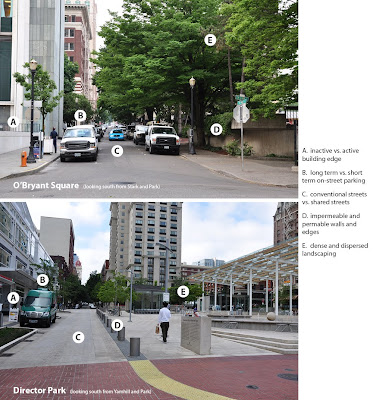 O'Bryant is at the top, and a new much more successful park, Director's Park, is at the bottom.

Herein lies the crux of the issue: the interaction between a city park and its immediate surroundings dictates how useful, sustainable, and safe it will ultimately be... O’Bryant’s integration in the daily flow of the city has been hindered by poor street edges on three of the four sides, awkward pedestrian access from all angles, and obscured visibility....

The streets around O’Bryant Square are discretely compartmentalized: the roadway is for moving and storing vehicles and pedestrians are expected to navigate on the edge on sidewalks and cross at designated points....

O’Bryant Square has many impenetrable walls and edges, which restrict movement into and through the park. These edges create internal spaces with no outlet which can encourage inappropriate [activities]...and contribute to the sense that the space isn’t safe. People cannot see into the park and are less likely to enter the space, much less stay and hang out.