The League of American Bicyclists as well as the Portland Bicycle Transportation Alliance has gone all hands on deck over the new proposed transportation bill. 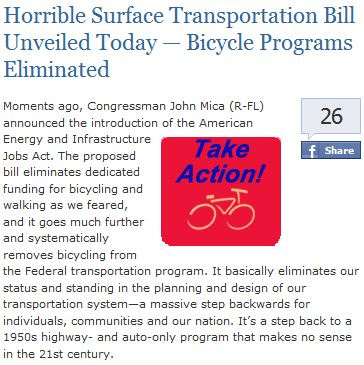 The American Energy and Infrastructure Jobs Act would axe a bunch of dedicated pots of money for walking and biking. 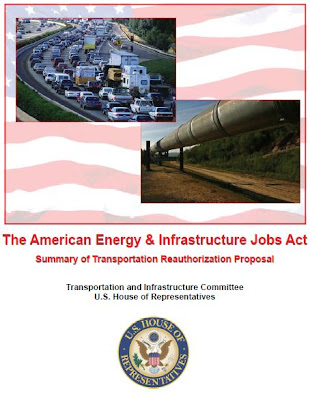 As you can see from the cover, it's all about cars and oil.

But that's the problem with it - that it's about cars and oil, not that it cuts already paltry amounts for walking and biking.

The current system isn't working. Transportation Enhancements are nice and all, but the fact is the TE mentality layers "extras" over a transportation system structured around "sort and separate," evaluated by Levels of Service for drive-alone trips, and meant primarily for Carburbian Autoists. In this system, facilities for people who walk and bike are frills.

That system is broken.

That's last century. It's all fiddling while Rome burns.

I would like to see dedicated pots eliminated and a block grant go to the State, and for advocates to accelerate the development of "least cost planning" here in Oregon, under which programs for walking and biking would be competitive indeed. I would also like to see a revised mobility standard that accounts for moving people rather than service for drive-alone trips.

That's transportation reform to get excited about. Arguing about nits on the edges? Mobilizing desperately for crumbs? Not so much.

* As I understand it the TE program started with ISTEA, the 1991 Intermodal Surface Transportation Efficiency Act. That's "ice tea" like "NesTea." QED.
Posted by Salem Breakfast on Bikes at 7:00 AM

The country is addicted to oil. Cars are the delivery device. The crumbing roads and highways are the degenerate crack dens where autoholics go to get their fix. I guess we haven't hit bottom yet.

I'm glad that you have the courage to question the effectiveness of the federal funding for bike and walk projects. We need a system that allows us to address local problems with local needs. We need to stop patting ourselves on the back for projects bike lanes along already bloated, menacing arterials. Which amount to taking two steps forward, five steps back.

I generally agree that retention of existing programs does not represent a step forward. However, you do have a lot more faith in ODOT's least cost planning process than I do. Having seen the planning process for the third bridge and the perverted application of the mobility standard in that process, I have every confidence that the ODOT road planners will find a way to conclude that there is no viable option other that widening roads to accommodate the increased motor vehicle traffic that their flaky model indicates will be present in the future.

I say that we should starve the beast by limiting road funding to the amount of money produced by federal and state fuel taxes. Perhaps we would then see interest in maintaining the existing system rather than building more monuments to the unsustainable past.

Oh, I don't know if it's exactly faith in the least cost planning process. You are right of course to have doubts!

Mostly I wish that the advocacy energy focusing on the Federal Reauthorization would be instead redirected to focus on State and ODOT level matters. If there's X amount of energy, I think that energy will yield greater results at a more local level. And maybe that X amount of energy would hasten and improve the development of the least cost model.

Maybe in Transportation the way that Oregon has got waivers and such in Federal Health Insurance and now perhaps Education. A states-rights application for experiments in transportation funding and planning - since the national system isn't working.

Anyway, this is all wishful thinking at the moment, alas.

Over at Portland Transportation, they suggest the bill isn't real - it's designed more for signalling than as a serious attempt to write policy:

"The criticisms of this bill are all on-point, except for one thing. It's not going to pass. Oh, it will likely pass the House. But it's not likely to become law.

Like much coming out of the US House this past Congress, its not designed to pass. It's a political statement by Tea Party conservatives, hoping to run on an anti-environmental platform. It's campaign fodder. If you like, it's part of the extended temper tantrum we've seen from the House in the past year." [emphasis in original]

So maybe that's another reason not to spin too many cycles on opposition to that bill.