We all have a short memory. Recency bias is pretty well documented. It seems even professional planners sometimes struggle to account for much more than a generation. They use trend lines based on the most recent decade or two - probably their young adulthood - but seldom ask whether these years offer the best guide to the future. But the life of a city, even young cities like those in America, has longer and more enduring patterns.

Sometimes a longue durée might be a better guide. We see this especially as we look at the post-war distortions created by cheap oil. Eisenhower America is over, but you'd never know it by standard Planning doctrine. 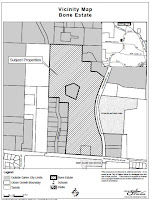 The orthodoxy is visible in projects large and small. Reading the supplemental materials for the Bone Parcel in December, I found a set of assumptions in the consultant's Transportation Impact Study that look not just exceptionally robust, but even crazy.

For all of the intersections but one, with the City's blessing the consultant assumed an annual growth rate of 5% in car traffic.

Over the 20 year horizon, a 5% rate represents an increase of 250% over the current car traffic volumes! 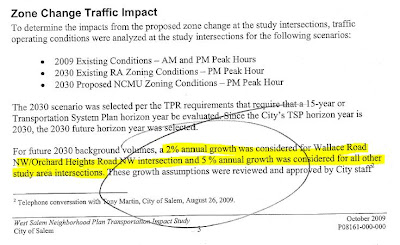 But the real world just doesn't support this. In a comment yesterday, Curt pointed out a tunnel in Brisbane Australia whose traffic modeling was fatally flawed with wildly overoptimistic growth projections. 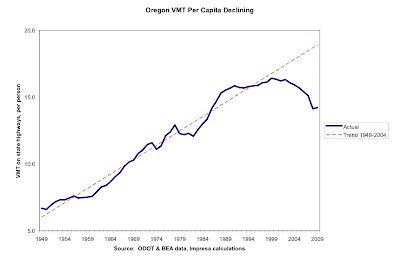 (Graph: Impresa Consulting)
But it's not just in Australia. Even before the Great Recession started, vehicle miles traveled had plateaued here in Oregon. Absolute trip numbers aren't increasing either. We know gas will not get cheaper, and we're pretty sure energy in general will get more expensive. Moreover, the decline in driving among younger people is even more dramatic than declines among older cohorts. 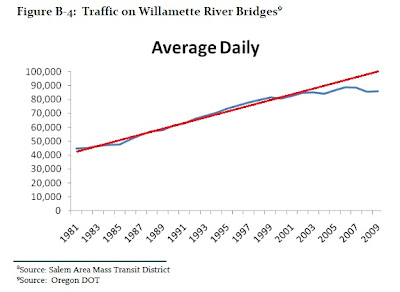 Here's the traffic over the Marion and Center Street Bridges. This is not VMT, but absolute counts. It shows the same pattern: A dip circa 1985, a small excess in the 90s, and a much larger decline off the trend line in the 00s. It's plateaued as well.

Since the gas tax is broken (think electric cars!) as a source of highway funding, we're also going to see new financial incentives to drive less: In addition to seeing some kind of carbon tax, we'll probably also see a tax on mileage, on VMT. Not to mention tolls and congestion pricing. There will be many incentives to be more choosy about driving a car!

Here's a revised chart of drivers licenses in Marion County that really shows the start of a generational shift in attitudes towards auto-oriented mobility. 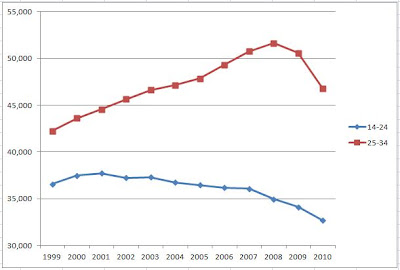 So even though this plateau is also recent, the best available information suggests not that driving will continue to increase at 5% a year, but that very real structural brakes on driving increases are looming on the horizon.

It's just not likely that car driving will continue to increase at a 5% rate!

But that's what we plan and spend for. No wonder things are messed up!
Posted by Salem Breakfast on Bikes at 7:00 AM

You sir are on fire. So the scuttlebutt in the SJ over State St. going two way has me thinking. A comment suggested that $65k for a light at State and Liberty is a waste of money while we are spending $5mil. to "improve" the intersection at Market and Lancaster. Anyone for a "Strong Towns" analysis of these two intersections? Asheville, NC recently did an analysis and found that an acre downtown yields 8 times (!) the tax revenue to the city when compared to an acre of strip mall big box development. Check it out: http://www.planetizen.com/node/53922

A reader sends a comment with correction via email:

The connection is between recency bias and your description of the project's assumptions is unclear to me. Your argument seems to rely on a recent change in a long-term trend line, so are you saying that the argument you are about to make may be tainted by recency bias? (I think this change is meaningful and we will not return to the trend line, but what if some sort of alternative vehicle fuel reduces fuel costs significantly? Stranger things have happened.)
Since I am focusing on a plateau in VMT from 2005 or so, you are also right to point out it is possible that this is subject to its own recency bias. I wanted to zoom out, though, and argue that change in the second half of the twentieth century may be the abberation, and longer-term trends in mobiliy more stable. I suggest we are seeing a cusp or inflection point. But certainly, if VMT start zooming up again, this argument will itself become a casualty of recency bias.

As for new vehicle fuel, part of the question is fleet replacement. I think that most of us do underestimate the extent to which hitherto unforseen technology will solve problems we had considered difficult or even insoluble. I do think technologies will come along, but I have doubts about how quickly they will constitute meaningful chunks of the total fleet. I also hope that the conversations around diabetes, obesity, and even aesthetic dimensions of walkable neighborhoods, will compel increasing numbers of people to skip the drive-alone trip for short trips.

I don't see cars going away any time soon - and my line is that I never want to be stuck with pedal-powered fire trucks; I'm all for gas-guzzling, C02 emitting emergency vehicles! It's just that we need to plan for improved mobility that is not also driven by growth in VMT.

Your post is certainly food for thought. Sightline has been hammering on this point for a while now, and the flatlining of VMT really calls into question the need for major additions to our road system. If VMT and trips are flat, or even declining, do we need new roads at all? We'll probably need some new neighborhood roads to serve new development (assuming that Oregon's population and single-family housing continue to grow for a while), but giant bridge projects and major lane additions are probably even more of a waste of money than they have been in the past.

Curt - That Asheville piece is really interesting. Your notion to compare the two intersections is terrific.

If you or someone you know runs the numbers, let me know!