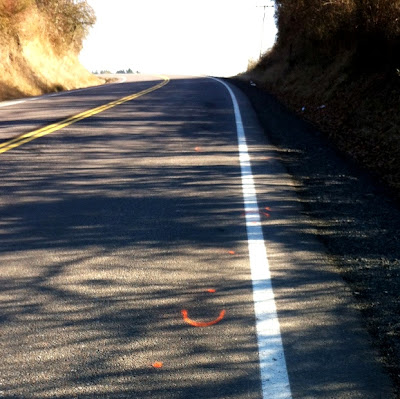 The markings appear to establish that the road, and Apperson, was just about to veer left and head east-bound. The Sheriff's press release and the rewrites in the Oregonian and Statesman, saying that he was west-bound, were almost certainly in error.

The road cut also casts doubt on the claim the driver was looking into the sun. If the cut and Apperson was in the shade, as several accounts have suggested, the sun would have been on the right, obscured by the cut's walls. If the sun was overhead and in a driver's eyes, Apperson also would have been in the sun. It is difficult to maintain at the same time that Apperson was in shade and that the driver was looking into the sun.

However, there is still much uncertainty, unfortunately. There's a lot of speculation out there. But the images do suggest, as many advocates and people who ride have feared, that the crash investigation may have have shown a bias in favor of the truck-driver, who may have been distracted or driving in a less-than-safe manner after all. At the very least it makes you wonder about observing the basic rule.

As I get meaningful updates on the crash I will continue to post them.

Thanks for continuing to provide commentary on the accident which resulted in Mr. Apperson's death. It is not the responsibility of the investigating officer of the Polk County Sheriff's Dept. to absolve the truck driver. Since the driver struck Mr. Apperson and Mr. Apperson had a right to be in the traffic lane, there is clearly an issue of unsafe driving.

Apparently the Polk County DA is reviewing the crash, and citations or other developments may emerge.