Even the Oregonian Sez: We Hit Peak Driving; also, SJ on Boise 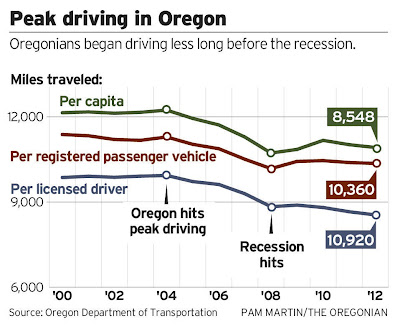 
[A]n analysis of new traffic data by The Oregonian shows that driving in the state actually peaked in 2004, four years before the Great Recession hit. What's more, for the first time in the history of America's love affair with the automobile, the driving levels nationally aren't tracking economic growth....

[In] the past 10 years, passenger vehicle ownership has increased by only 4 percent, even as Oregon's driving-age population jumped 14 percent, Oregon Driver and Motor Vehicle and U.S. Census statistics show....

[I]n Multnomah County, as bicycle commuting, car sharing and transit use has transpired at a revolutionary pace, the number of registered vehicles grew by less than 1 percent, even as the population grew by 11 percent....

"The long-held belief is that the Great Recession hit and forced people to cut back on their driving," said Michael Sivak, a research professor at the university's Transportation Research Institute and author of the study. "But it's clear that something else was happening with society before that"...

Chris Monsere, another PSU professor of civil and environmental engineering, said the generational shift is positive from a safety perspective.

"Older and younger drivers are the most at risk groups," Monsere said. "Less driving means fewer crashes and injuries, and travel by public transit is generally much safer than other modes."

(More on the Third Bridge here.)

Mayor to Travel to Design Conference


[Mayor] Peterson is one of eight mayors invited to the event, held Oct. 16 through Oct. 18 in Charleston, S.C. The Mayor’s Institute on City Design brings together mayors and design experts to tackle urban problems, such as downtown revitalization and transportation planning.

It’s the first time a Salem mayor has participated in the event, city officials said.

Mayors present a case study about a problem facing their city and participants suggest possible solutions. City of Salem officials haven’t yet decided what case study Peterson will bring to the group.

Presumably the Boise Project is a leading candidate for her to take!

Meanwhile, the paper has a great editorial on the project:


[T]hroughout the community, there remains a strong consensus that the old factory site must be developed and that the city and the property owners, Mountain West Investment Corp., need each other in order to get any project done.

What is needed now is a break, for a few months, to let frustrations fade so people can return to the conversation later with renewed vigor, renewed commitment, renewed cooperation — and maybe a few new ideas.

(All notes on the Boise Project here.)
Posted by Salem Breakfast on Bikes at 11:30 AM

Moving forward, the community needs to insist on the same kind of intense but fruitful negotiations that led to creation of the Salem Convention Center, the carousel, the Salvation Army Kroc Center — and to Riverfront Park as we now know it.

Good lord, I hope not! I don't know what the discussions were like, but the products of those discussions all share a common characteristic in that they are grossly underachieving because they all reflect car head thinking. The Kroc Center is a disaster before our eyes, the "Convention" Center is a tomblike vitality sinkhole, and the park and carousel are like the tigers in the Portland zoo, bittersweet to see because, nice as they are, they're imprisoned by concrete barriers.

We need a lot better discussions than whatever happened to produce those things!

You are absolutely right of course.

(But since there were so many other good points in the editorial - and the more general point about bringing more people and ideas to the table remains sound! - it didn't seem necessary to dwell on the fact that the examples you point to were in fact failures rather than successes in important ways.)