NEN Meets Tomorrow the 17th: Marion and 13th, and Center Street on the Agenda - Updated

In addition to an update on the neighborhood plan process, they'll also get a presentation from the City Traffic Engineer on some plans for Center Street and the crossing at Marion and 13th Street. 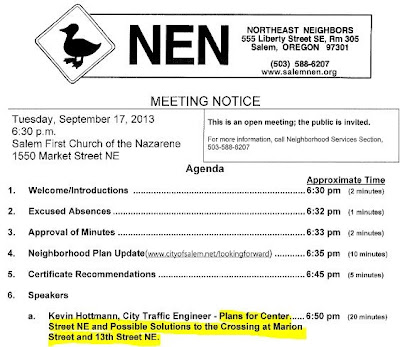 Back in March, you may recall, one of the items discussed was the possibility of crossing help at the tricky intersection of 13th and Marion, just northeast of Safeway.

And it looks like the City is ready to show some preliminary concepts!

The intersection is right after Center Street splits into a one-way couplet, and while Center Street south of Safeway has marked crosswalks and a pedestrian median, Marion Street north of the grocery store has neither, and most often cars take the dual turns quickly and without consideration of the unmarked crosswalks and any people waiting to cross.

People walking to the grocery store, including students from Parrish and North, sometimes face great difficulties and even dangers as they attempt the crossing.

On Friday the City didn't have any concept drawings to share, so if you're interested, the meeting will be the first place to see them!

Also interesting will be information on plans for Center Street.  Informally, City staff have suggested some interest in "upgrading" Center Street there to a "modern" three lane cross-section.  From 13th out to Lancaster, Center makes a capacity crescendo, growing from two lanes to five (six with a short turn lane).

Between 13th and 25th it has an "old" two-lane cross-section - though the whole street is pretty wide and there are sidewalks and a curb strip with trees.  Mostly successfully, it carries about 18,000 cars per day here with just the two lanes:

At 17th it picks up bike lanes and some parallel parking stalls, but remains two drive lanes.

At the State Hospital, with the new facility it becomes three lanes (before and after images here):

And just before Hawthorne as it heads over I-5 and out to Lancaster it becomes five lanes.

So it will be interesting to learn if the section from 13th to 25th is envisioned for widening, and if so what that might look like.  Bike and Walk Salem called for a standard bike lane in the 13th - 17th section.  (The dimensions in the drawings here are swaggy, illustrative only, and are certainly wrong in detail, please note!)

Posted by Salem Breakfast on Bikes at 7:00 PM

You indicate here, and in previous posts, that yards along 17th got whacked to accommodate a third lane. I don't think that is accurate. I believe 17th used to have 4 travel lanes and was restriped in its current configuration in 1996 (ish) but I'm not positive about that.

I've noticed in traveling to other OR cities that two lane streets seem to be a much higher % of the street inventory than in Salem. Edgewater is the only street in Salem that I can think of that is only 2 (2 way) lanes that is developed with any shopping. But in other cities there are many more options to strip malls: NE Alberta PDX, 13th in Sellwood, 19th and Agate in Eugene, Monroe St. in Corvallis, and 3rd St. McMinnville all come to mind.

I think you're right, come to think of it....17th may be an example of an early, 1990s road diet! Thanks for pointing that out.

The more general observation remains, though, that front yards got whacked when 17th was widened (here's a part of 17th that shows this). When the older homes were built along it, it wasn't even a through-street, having a dead-end at Mill Creek between Chemeketa and Asylum Avenue (Center Street). The old maps show a 60 foot right of way for much of 17th, so the cross-section accurately shows how front yards would be considerably larger when the road wasn't built out with 4 traffic lanes or 3 + bike lanes.

Especially with the old streetcar commercial districts in PDX, it is as you say remarkable how much commercial development can work on a two lane street - and how many trips they can actually handle.

About those streetcar commercial districts. Here's an interesting article Shoup posted on Facebook:

Thanks for the article and the update on the meeting!

A flashing beacon at 13th and Marion would be so helpful! The crosswalk at 17th and Nebraska is also too infrequently observed by people in cars, so a median - since Englewood is so close - would help there too. It'll be interesting to learn more about the stuff on Center Street.

updated with drawings from the City!