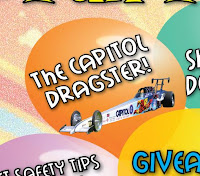 But it's not surprising that the event is more for marketing than for substantive contributions to safety.  "Fun Fair" is the effective center here.  It's the Happy Meal™ approach!

Asking car dealers to focus seriously on safety may not be realistic and is actually rather something of an oxymoron.

The single best thing we can do for car safety is to drive less! And obviously that's not in the interest of car dealers - or the car-highway-industrial complex behind them. 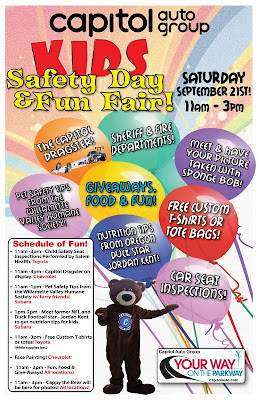 So observations about mixed messages in a "safety day" may not be all that interesting, therefore, and are probably more nugatory than useful...but still.

Right off the bat you see the bit about "the Capitol Dragster."

At an event for kids with incomplete faculties of judgment, an event that should be all about the benefits of going slow, instead we have the thrills and even romanticizing of drag strip racing, an interest that all too often spills over onto our public roads.

Wouldn't it be great instead to see a version of the hammer!?

Car dealers could get on board with the "20 is plenty" campaign or something like it. (I know...dream on.)

The responsibility for safety should rest on the agent, the driver potentially doing the hitting, not the passenger being hit or trying to avoid being hit.

Focus on safety belts - like with a focus on helmet use for people bicycling - is sensible, but it also puts responsibility on the potential victim rather than working on prevention and the responsibility of the agent for a disaster.

This is consistent with ODOT's stance, though: 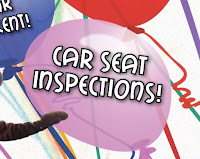 But safety belts and car seats, like helmets, are only useful after the cascading chain of catastrophe has started.

We shouldn't lose sight of the fact that it's the cars that are dangerous, principally to other users of cars. It was true in 1937 (hot type on paper) and it's true in 2011 (in a tweet): driving a car is dangerous and we all should think about doing it less.

Brilliant post SBOB. Thanks. Some day we need to launch an effort to reduce traffic speeds in Salem.