Two meetings today show how difficult yet it remains to think about changes in our transportation system.  In theory we should be able to coordinate actions in support of reducing our reliance on drive-alone car trip across a variety of policy areas.  But in practice it's far from easy, and progress remains theoretical or just plinking around on the edges of things. 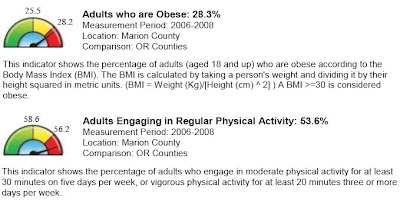 The Community Health Improvement Partnership led by the County meets today to plan 2014 projects with partners.

So far the overall CHIP project has addressed health largely in a consumerist way - looking at the small discretionary choices in leisure time an individual might make about this or that.  It hasn't looked at the way we create systems - and changing those systems - that make healthy choices difficult. 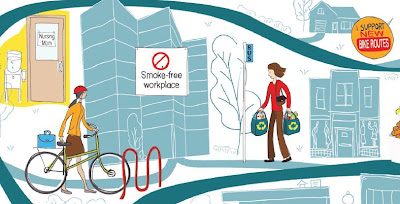 On their agenda, as they plan for 2014, the focus is on things like "healthy vending machines" for better breaktime, and not on getting people to bike to work and building a transportation system that makes easy to choose to bike.  A bike was on their "road map" graphic earlier in the project, but so far they haven't seen city transportation and the urban, built environment as a meaningful topic for action.

And perhaps it is too big.  The project staffing and political realities may not permit that.  Modest goals may be the right thing for now.

Still, it may just be a bias of the blog here, but it seems that while working on changing the transportation system is both a bigger and more difficult change - a system change - than swapping out a few vending machines, it is also a more useful change.  If you have a system where large numbers of people feel safe and comfortable walking, biking, and using transit, doesn't this have a cascading chain of beneficial effects, a sort of network effect, much larger than that of swapping vending machines in the lunch room?  From here the answer is yes.

As long as we keep building out a transportation system that makes an easy default to live far from work and make drive-alone trips to work, it will be harder to balance calories burned with caloried consumed.  Why not make active transportation and better land use a priority with those healthy vending machines?  Why not integrated regular exercise into daily life and not make it a leisure activity for discretionary time and income?

The group meets Thursday, September 26th at 10am in the Salem Health CHEC Wellness Kitchen.

The Citizens Advisory Traffic Commission will hold a Public Hearing on a request for time-limited parking just west of Bush Park.  Public comments submitted in advance of the hearing show just how deeply implicated in our general culture is the notion that people should not have any fees associated with drive-alone trips or with daily temporary car storage in public spaces.

The specific question is on Miller Street:


The Assistance League of Salem, that manages the Encore Furniture Consignment Store, asked the City Traffic Engineering Division to consider installing time-restricted parking along the frontage of their property on Miller Street SE. The intent relayed to the City was to open up these spaces for customers during the day. Currently, employees that work in the nearby offices park all day along this block face.

In response, one nearby business owner writes:


I know what exactly is the issue...as we face the same situation....[Employees] park on both sides of the street all day long from minimum 9:00am to 6:00pm...so customers have no place to park as they visit [multiple] businesses. [This owner objects to the change unless the time-limited zone is increased in ways that will benefit their own business]

Almost as if in direct response, one nearby employee writes:


Those of us that work in the surrounding offices have a hard enough time finding somewhere to park. I [arrive early]...so I can park within a block of my office. If there is a change...that means more of us will have to try and find parking on Commercial, which is already dangerously crowded....We barely have enough parking for [visitors], employees are on their own....Yes it would be great if we all carpooled, and or took the bus, but that isn't always possible...[for me] getting CARTS from [Polk County] to Salem then grabbing a Salem Bus would be difficult. Whoever proposed this parking change should be forced to find parking elsewhere every day for the next 6 months before they complain any more about us parking on the street.


The parking situations for businesses in our area is grave; there simply is not a lot of room for parking, and a significant number of employees in the area...While many of our neighborhing business have resorted to attendants and further extensions of the space they feel entitled to, we are feeling constantly pressured and excluded without, as it seems, reasonable cause...but if there is no place for employees' vehicles, it creates a hardship in coming to work.


Metered or timed parking does not benefit anyone, except the city by collecting fines and meter fees...If the city truly wants to take care of the parking problems then improve bus service, add bicycle lanes and add more bicycle parking throughout the city.

The blindness of autoism, the assumption that "of course a drive-alone trip is the only way to get to work" and "it is the City's responsibility to provide free on-street employee personal parking in the public right-of-way" is troubling, but of course the first and third employees have another point:  While strictly speaking there are alternatives to the drive alone trip, for the most part they aren't good and convenient alternatives.  We don't have very good transit, regional or local; we don't have a complete network of comfortable bike lanes; and we lack bike parking and other trip-end facilities.  You know, it's like if you wanted to make bicycling difficult, how would you do it?
I mean, you just go down the list of existing conditions, and the disincentives to trying anything other than the drive-alone trip are many and deep:  We really make people have to jump through not just hoops but over high, high hurdles in order to do something other than make a drive-alone trip!  So no wonder there's not a meaningfully large proportion of people who are making the extra effort not to drive.

Back to the blindness of autoism, you see here how we have normalized the idea of free short- and longer-term leases of public right-of-way for temporary car storage.  The free lease is such a background of normal expectation, that someone who lives far from Salem and basically doesn't pay for Salem roads can nonetheless urge that the petitioner "should be forced to find parking elsewhere every day for the next 6 months" before taking further action.

I think this applies to employees 1 and 3 (and many people in this city):

Exactly, Curt. Here--as always--we will do things precisely as always: when we are forced to. Until then, we make do.

B+: What I have observed is that younger, more educated families are not willing to "make do" in Salem and have left for Portland, San Diego, Boise, Eugene, and Corvallis.