Today the North Gateway Redevelopment Advisory Board will meet this morning at 8am and hear about the final recommendations of the Kroc Center Access Feasibility Study. 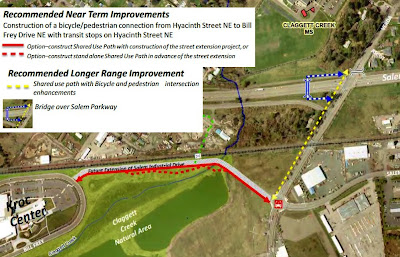 Basically a big bridge across both the Parkway and Railroad was too expensive, and so they scaled back to a smaller bridge over just the Parkway and two shared use paths along Hyacinth and Salem Industrial/Bill Frey.

From the final recommendations settled on earlier this summer:


Near Term Improvements:
This connection could be constructed either as a part of the planned roadway extension of Salem Industrial Drive NE (adopted project in the Salem TSP—not currently programmed for funding) or could be constructed as a separate shared use path through the conservation easement and with a bicycle/pedestrianbridge over Claggett Creek (see map), should funding for the path become available sooner than funds for the roadway extension. The planning level cost estimate for construction of the street extension with transit stops on Hyacinth Street NE is $8.5 to 9 million. The planning level cost estimate for a shared use path with a bridge over Claggett Creek, transit stops, and enhanced crossing of Bill Frey Drive NE leading to the Kroc Center is $1 to $2 million.


For previous notes about the study and siting of the Kroc Center, see here.   In the end, when with a different site we could have avoided the problem altogether, it's just dumb, dumb, dumb that they sited this big facility in an industrial wasteland; and having made that dumb decision, it's even dumber that they didn't anticipate this transportation problem and fold paying for the solution into the original construction costs.

The pieces in this project will linger around competing for dollars (about $5 million total) that could fund other projects that didn't arise from such obviously preventable problems.  And kids from Grant, Highland, and Hallman neighborhoods will still face formidable barriers in reaching the Kroc Center from the other direction.

Pretty much EPIC FAIL all the way around.
Posted by Salem Breakfast on Bikes at 7:00 AM