CRC at the Legislature: Newsbits on Tolling and MegaProjects 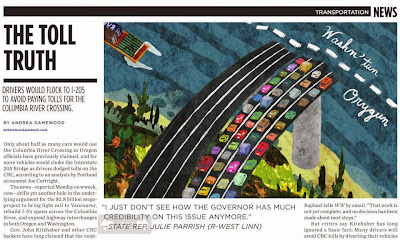 With the September 30th deadline for action on the Columbia River Crossing and Monday's Special Session of the Legislature, Willamette Week has had a cluster of updates on the CRC fiasco. Not all of them offer direct analogies to our own Salem River Crossing fiasco - but insofar as they cast further doubt on the wisdom and feasibility of not just his giant auto-centric mega-project, but any giant auto-centric mega-project, they're worth paying attention to!

September 26th
Wheeler Kicks CRC Can Down the Road: Citing risks, Treasurer's letter to lawmakers says it's "premature" to conclude deal can work

September 25th
The Toll Truth: Drivers would flock to I-205 to avoid paying tolls for the Columbia River Crossing.

And elsewhere recently -
Report: Traffic projections 'invalidate the transportation rationale for the CRC' (BikePortland's take on the tolling news)

The Costly, Risky CRC is Back – Now with Twice the Risk (a different angle on risk and exposure)

For more on the River Crossing / Third Bridge see reasons it's a bad idea, and all breakfast blog notes tagged River Crossing. The No Third Bridge advocates have the latest news and information.
Posted by Salem Breakfast on Bikes at 7:00 AM