It's interesting - not really in a good way - to see the difference between the hullaballoo over safety at the Carousel and Riverfront Park and the much quieter response to questions about walking and biking to school.

It's not that the Carousel and its safety is an unworthy cause - far from it.  But circulation and access at the Carousel has attracted an amount of attention, and even displaced attention, that might better be directed at larger, more systemic problems.

Isn't there something wrong, too, more wrong even, with the paucity of kids walking to school and the conditions under which we either ask them to walk or find so problematic (whether just in perception or in actuarial reality) that we insist on busing or driving them?

In order to avoid busy roads with inadequate or missing sidewalks, bike lanes, and crosswalks, parents regularly drive able-bodied kids to school. Some schools are sited along busy roads that the school district won't even ask kids to cross, and so the School District furnishes yellow bus service for relatively short distances.

And as a question of total priorities and whole risk assessment, as an actuarial question, which of these scenarios represents a more likely crash?

A small child and a fire truck on a path in Riverfront Park?

One of many kids in the city walking along a road without sidewalks and engineered for auto speed and through-put? 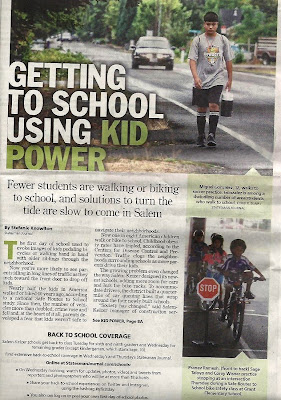 The article in Sunday's paper was great to see.  For the SJ it represented a deep dive into the issues around kids walking or biking to school under their own power.

Double-Dipping in the Bond Measure - Safety or Capacity Increase?

One of points in the article deserves greater follow-up - a Salem-style Politifact check! How much of the bond is directly going to safety for people on bike and on foot?


A map of Salem shows that many neighborhoods between the downtown core and newer developments lack sidewalks. Salem Transportation Planning Manager Julie Warncke calls it the doughnut because it forms a big O on the map.

Salem spent about $1.2 million of its $100 million streets and bridges bond to fill in some gaps, but it barely dented the doughnut. It would cost too much to build them all, Warncke said. Another $38 million went to safety improvements such as median islands and curb extensions, she said, many of which improved access to schools.

On the one hand, it puts Swegle on a new, quiet dead-end street.

On the other hand, by straightening out the curves, it permits - indeed encourages - higher speeds and more through-put.

There might be less traffic directly in front of Swegle, but kids walking to school now have a busier Market/Swegle to contend with.  The 90-degree turns were an annoyance for those in cars, but "impediments" like that can also be considered a "feature," as they calm traffic.

So is the Market/Swegle project primarily a "safety" project?  Or is it really a capacity increase with some safety lipstick?

You can ask this question of almost all of the "safety" projects in the bond.

Few of them are primarily safety projects for people on foot and on bike. Most of them more fundamentally represent capacity and speed increases for people in cars, with sidewalks and bike lanes added on the side.  With the turn pockets, people in cars don't have to stop and queue up behind someone turning across traffic.  Moving from the two-lane to three-lane configuration is primarily about speed and capacity increase.

In more rural locations, the three-laner ends up being more about speed, and since the communities are so auto-dependent anyway, few are out walking or biking.

So if the Eola Drive project offers clear benefits on both sides of the ledger, others, like Skyline Road, are much more ambiguous, even tilted in favor of increasing suburban, even semi-rural, auto capacity.

To say, then, that the City is spending $38 million on "safety" is not true. Hardly any of the $38 million went to median islands and curb extensions!  Most of that went to carspace.

Safe Routes to School is Stalled at the City Level

Another piece that is interesting.  Why is did the Safe Routes to School analysis that was formally part of Bike and Walk Salem get hung up?  From the piece...


The city also got a $240,000 grant to update its transportation plan with a focus on Safe Routes to School, detailing projects for each school that will make it easier to bike and walk....

The city already took the first step by developing Safe Routes to School assessments for each Salem school, including parent surveys, which are part of the requirements for grant money.

The next step would be to create an action plan to improve the school’s walking and biking. Warncke said she is willing to help, but not to lead the charge.  “We see it as something the schools need to lead rather than the city pushing this,” she said.

Two Salem-Keizer officials served on the stakeholder advisory committee for the city’s Safe Routes to School assessment, but neither remembered getting copies of the finished report, they said. Warncke sent an updated version last week.

So what happened here?

It was interesting, too, that no Councilor, Mayor, or Director-level City employee was out in front, speaking for the record on the issues. Why is there no leadership on the issue?  Where is the hospital, and health organizations like the YMCA and the County and its "Community Health Improvement Partnership"?

You never know what ends up on the "cutting room floor" because of space constraints.   But one effort that wasn't in the article was the Bicycle Safety Education program at the Boys and Girls Club.  After the BTA transitioned out of directly offering the two-week class in Salem, the Boys and Girls Club picked it up.  As a longer program, one of its aims is to create a habit, which shorter safety classes cannot often accomplish.

One of the great advantages that the Boys and Girls Club sites have over the Kroc Center is that you can actually walk and bike to most of the Boys and Girls sites!  They are located in neighborhoods, not industrial wastelands, and that's just a huge, huge, huge competitive advantage that the Clubs ought to seize.

The Clubs also have an aspirational component in the "Flow Riders."  Those who might be interested in racing or more performance oriented bicycling have a team to look to.

As the Boys and Girls Club builds out their program, they might have the best of all worlds there.
Posted by Salem Breakfast on Bikes at 12:01 PM

I think you answered your own question in earlier posts. The safety of children is not the issue. Its a human shield argument to prevent development on the waterfront. But it does speak to the culture of fear. No wonder parents are afraid to let their children walk to school.

That painting of the kid in the headlights of the fire truck is over-the-top.

Yeah, if emergency vehicles are ok on the Union St RR bridge, why not in the park? The fear-mongering here is excessive!

You're right anon. Another double standard from No 3rd Bridge. Very little reason for Julie W. or anyone else to take any risks when people in this town are anti-everything.

It certainly does seem like people talk "change," but when it comes down to enacting it, "more of the same" too often is the preferred solution. There's a staggering inertia here.

The point about emergency vehicles on the RR bridge is shrewd. There's much less clearance on the bridge than there would be in the park, where there's plenty of room for evasive action.

Additionally, the image is really insulting towards fire personnel - have they ever struck someone on foot while on an emergency call? When I am out, I see them - as with most UPS drivers for example - as among the most aware of what is on the street and the easiest to make eye-contact with and non-verbally to negotiate yielding or going.

The SJ just posted a piece confirming the length and difficulty of the 6(f) conversion process. So if "safety" is an exaggerated issue here, on this count the difficulties with a State Street access through the park are much greater.

Interesting conversation and debate over the weekend, to be sure!

That painting is on the cover of the Salem Weekly. Even our "alternative" weekly is a voice for the status quo.

The schematic above of the "new street" has an assumption that drives me (sorry) wild: slapping down bike lanes means people while cycle there. The majority of bike lanes in Salem are applied to speedways that only the most daring cyclists will use. They serve as almost a warning that the average person shouldn't cycle there. It is galling to see the assumptions that people make about active transportation.