More on the Boise Boardwalk - And Keep the Cthulhu Keyboard! - updated

City staff didn't talk much about the boardwalk, though, and I hope it's not lost in the shadow of constructing the larger (and directly income-generating) buildings. Since it's for everyone, shouldn't it be among the things first built, and not the last?

In any event, one reason for a boardwalk design atop the slab instead of a path streamside - a reason it might be a positive good idea rather than a cheap fallback -  might be that there truly is no streambank to restore along this section of Pringle Creek.

At the westeastside property line, one level below the bridge you can see the thickness of the concrete slab and the way it rises about three feet above the level of the new path.  For one, that's another giant bit of demolition, and two, maybe its stoutness is a feature rather than a bug.

Related to this, there's also that funny gridded concrete feature over which the water spills.

Call it the Cthulhu Keyboard?  (Maybe you will think of a better name for it?  Giants, Trolls, Aliens...what mythic figure placed it there, and why? I think it's possible that retaining this thing and highlighting its oddity could become a real feature of the path and walk!)


But it seems to me that in the face of all this concrete, removing that for riparian restoration would be a monumental task and that it would disturb sediments likely already badly contaminated.

On the north side of the creek, there's not only a slab, but a concrete walled enclosure. Who knows what is under and inside of that!  Maybe that too should not be disturbed. (Those Lovecraftian monsters imprisoned there!)

The south side (left in the photo) is open a bit, and people have clambered over the stones and concrete.  On the lower level it looks like there's also a concrete slab rather than bank, and at least in low water conditions you can sit on the ledge.

So on both sides it's hard to see that there's a meaningful bank left to restore.  This might be an important part of why a boardwalk is a superior path solution.

There's a note in the paper today with some additional detail on the path and proposed boardwalk connection. 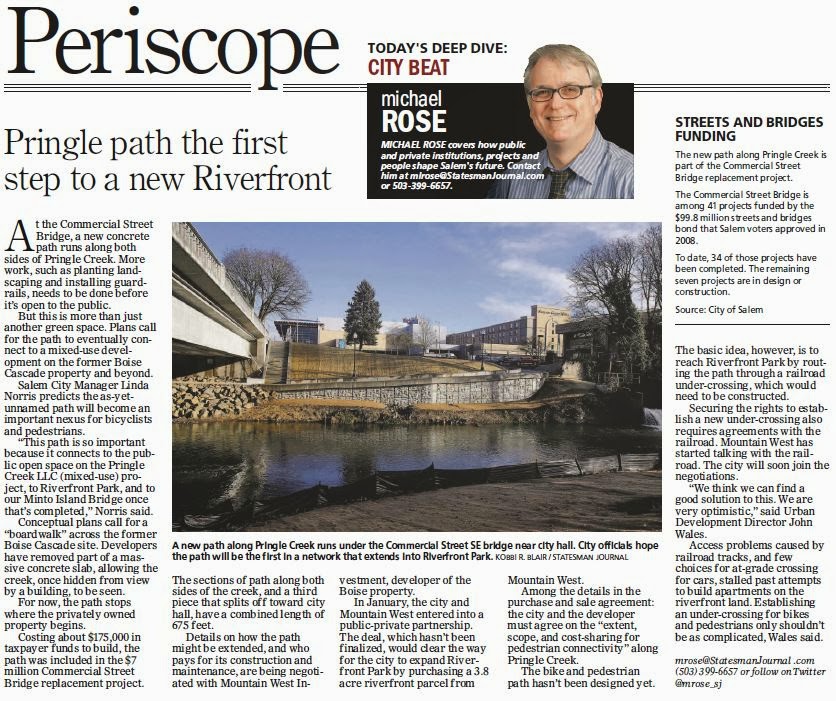 It sheds additional light on why the $2 million for the park parcel was a reasonable investment in the public interest and not a "sweetheart" backroom deal that unfairly enriched a developer. 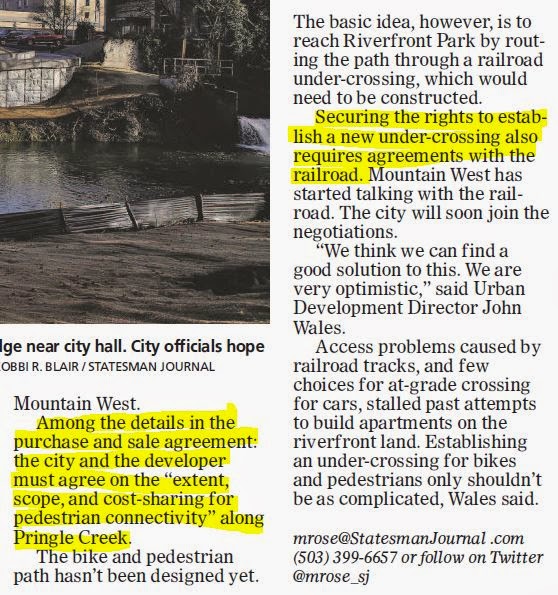 As it confirms, "the city and developer must agree on the 'extent, scope, and cost-sharing for pedestrian connectivity' along Pringle Creek." That is to say, the purchase price for the park parcel includes in a sense an easement on private property the City will not own but which the Public will be able to enjoy.

In order to negotiate these details, it is important to have at least a working relationship with the developer.  Had the parcel been secured by Eminent Domain, about the path connection along Pringle Creek the developer could easily have said "no access for you!"

Back when the deal was first announced, in a comment a reader suggested that the railroad opposed undercrossing, and highlighted that it wasn't a done deal.  I'm still skeptical that the RR opposes the undercrossing, but it does appear that the undercrossing has to be negotiated yet.  And a developer made uncooperative by Eminent Domain would be unlikely to assist here as well.


As land-locked, orphaned land appropriate only for park development, it was valued at between $700 - $800k

As developer-ready land with transportation access, it had three valuations. One by the City for close to $4m, and one each by the developer and a third party at a bit over $5m.

Although traffic access is a remote possibility at this point, it has not been ruled out 100%, so the low-ball park-only figure of $800k is too low. At the upper bound, because traffic access remains quite problematic, the upper figures of $4m +/- are too high.

So from a pure negotiating standpoint, the parties met in the middle at a figure of $2m. Neither side gets all that they want, but it looks like a pretty classic deal.

Without the park parcel the City estimated that staging and construction for the Minto bridge would trash the existing park for about $700k worth of damage.

So in addition to costing the City $800k, the City gets $700k of additional value in not trashing other parts of the park. Additionally, there's a section of path - the boardwalk - that will connect the Civic Center to Riverfront Park along Pringle Creek. No estimate on the value has been given, but if a simple pedestrian median costs $40,000, the boardwalk is worth much more than that. The developer will be paying for this project.

So let's say the boardwalk's value and the public access is worth $200k.

But this calculation, then, the City overpay, the actual level of unearned subsidy, on the park parcel is only $300k. And, again, there's great public interest and value in getting this development going. So I have a real hard time seeing the deal that the City struck as being bad, grafty, or any way shady. It seems like a pretty straightforward meeting of buyers and sellers, and a deal whose parameters the public really pushed for last year in the extensive debate over the Carousel entry and access issues. This is not something that arose in a vacuum or in secrecy without public comment.

Yes, let's hope that the final path contains some historical plaques that show what was there and the history or how the area has changed over time. Great learning feature!

updated with clip from paper and a general argument for why the $2 million price is reasonable and not an extravagant "sweetheart" deal or waste of public dollars.