The initial set of recommendations are out on the Commercial Vista Corridor Study, and my first impression is that they do significantly more for travel on foot than on bike. (summary pamphlet also)

The buffer isn't continued the length of Commercial in all the views, so a non-continuous buffer seems like it's of limited utility. Additionally, the travel lane width isn't consistently reduced to 11 feet - but there's no need for 12 foot travel lanes! (Why not make them all 10 feet, anyway?)

More than this, though, because of the vastness of Commercial here, I'm not sure that buffers without barriers will help infrequent, young, or inexperienced people on bike. The buffers will help those of us who already bike on Commercial, but I don't think the treatment will be strong enough to attract "interested and concerned" people on bike. This would be a marginal, incremental improvement, not a game-changer.

It's important because family-friendly bike boulevard concepts skirt the area, largely paralleling Commercial, and don't help so much if you want to shop or run errands on Commercial.

Alternative 2 through Commercial leaves the bike lanes intact and instead just widens the sidewalk. This seems like it's missing the point.

Here's more on why Alternate 2 isn't helpful, and why even Alternate 1 only goes so far.

The sidewalks are empty here.

Making them wider, with room for "furniture," is just making bigger ornamental nothingnesses. Wider sidewalks would only make sense if there were buildings and businesses adjacent to them. The problem is zooming traffic and creating separation from it, not that the sidewalks aren't wide enough to serve a latent demand for more walking space. Without moving buildings to the sidewalk, wider sidewalks by themselves aren't helpful.

The Charlie Foxtrot at Liberty and Vista and Alice

The most interesting and surprising element in the draft recommendations? An alternative to shift the northbound Liberty-Commercial junction from Vista to Ratcliff/Salem Heights.

This was totally unexpected, and it's possible it goes towards solving multiple problems. But it doesn't seem to solve the most important one, the bikeway gap on Liberty. 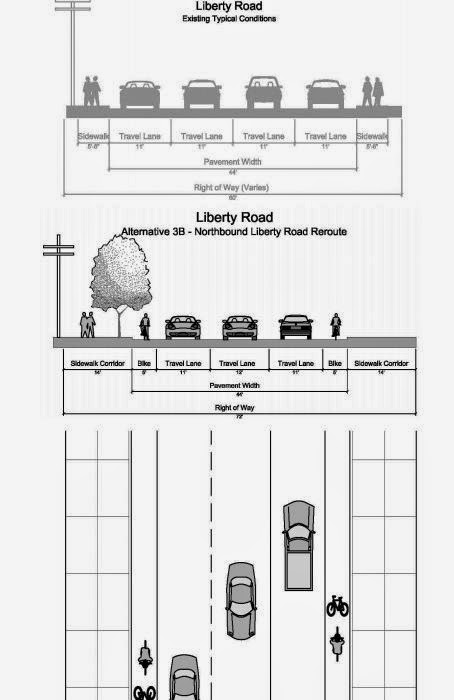 Maybe the solution is that northbound traffic on Liberty should be rerouted at Browning, and then Liberty could have three auto travel lanes all the way from Browning to Alice.

(The intersection at Alice/Fairview itself will probably deserve a post of its own. Link added 4/10.)

The recommendations suggest several "midblock" crosswalks with flashing beacons along Commercial. Traffic signals, and therefore crosswalks, are spaced too widely here, and this goes a long way towards abating that deficiency.

In the end, we're totally stuck by a commitment to maintain auto capacity standards.  Until we embrace lower LOS grades for auto travel and see a positive trade-off with higher human capacity in general, we will fiddle on the margins and avoid remaking our streets.

There will be an Open House on Thursday, April 23rd as well as a prior Stakeholder Advisory Committee meeting on Wednesday the 15th.

For all notes on the Commercial Vista Corridor Study see here.
Posted by Salem Breakfast on Bikes at 7:00 AM

Inserted an additional bit on sidewalk widening and why it may not be very functional here.