Couple of interesting notes in the paper today... 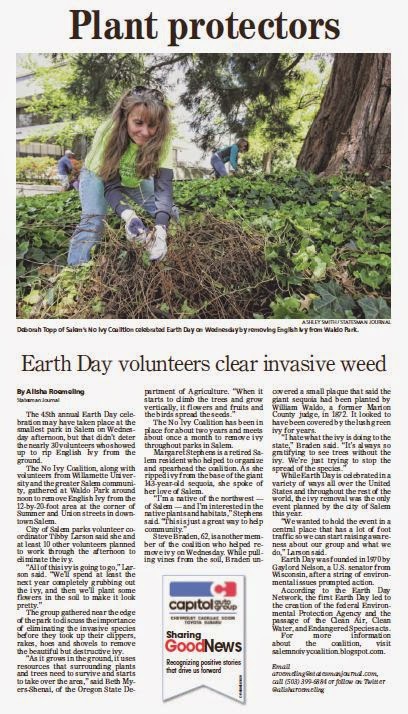 One was the Earth Day celebration at Waldo Park. In no small part because of the number of vacancies on City of Salem commissions and advisory boards, and the dinky way the City chooses to use many of them, by itself a brand new Sustainability Commission has not seemed like the best way to address our "Sustainability Gap." Nonetheless, in light of the way "sustainability" was dismissed at the recent goal-setting session City Council held, it is perhaps wholly emblematic that our actual Earth Day celebration was at our smallest park.

There was of course the Earth 411 thing a couple of weeks ago, so we shouldn't try to wring too much symbolism out of the diminutive nature of this event.

A paradigm of small park ivy-pulls by individuals, or a greater commitment to blue-barrel recycling, doesn't scale up to meaningful action on Sustainability. We need also to knit sustainability and life-cycle analyses into nearly all other kinds of action. (Like the EOA-HNA, for example!)

In the piece there was also a funny bit about the plaque in the park.


Steve Braden, 62, is another member of the coalition who helped remove ivy on Wednesday. While pulling vines from the soil, Braden uncovered a small plaque that said the giant sequoia had been planted by William Waldo, a former Marion County judge, in 1872. It looked to have been covered by the lush green ivy for years.

On the one hand, this testifies to the noxious power of ivy to grow, conceal, and throttle. On the other hand, the sign hasn't been concealed for that long, and our ignorance of it is also a sign of our autoism: Too few walk by this historic site and just look and notice.

Also interesting was a neo-temperance note.

Alcohol's a complicated topic, and we just have to put aside for a moment the public health problems of its abuse as well as the problems of functional alcoholics and incorrigible drunks. Choosing not to drink is the right decision for some people. But the piece also highlighted the autoism in "Mothers Against Drunk Driving."

Part of the problem is that we don't have a transportation system that makes it easy not to drive.

The problem gets framed up as: Because you must drive, don't drink.

It could instead be: Because enjoying a drink with friends is pleasant, don't drive.

What if we just assumed that zooming around in a car fundamentally impairs our ability to respond to the world safely? People out walking routinely trip over sidewalk gaps - if humans aren't wired 100% to avoid that simple problem, how is it we assume they are wired to drive safely a ton of sheet metal at much higher speeds?

Probably also if we managed our own worlds to have more walking and less driving, there would be less of the daily marinade of gloom for which a drink is sometimes the anodyne solvent.

Here too we don't want to try to squeeze too much high meaning out of a passing MADD reference. But both pieces indirectly show the background noise and bias we take for granted with our autoism.
Posted by Salem Breakfast on Bikes at 1:00 PM

You write: "Part of the problem is that we don't have a transportation system that makes it easy not to drive."

I'd say "Part of the problem is that we don't have a pattern of land use and development that makes it easy not to drive".

Same coin, other side.