Education or Engineering: Signs for Debate 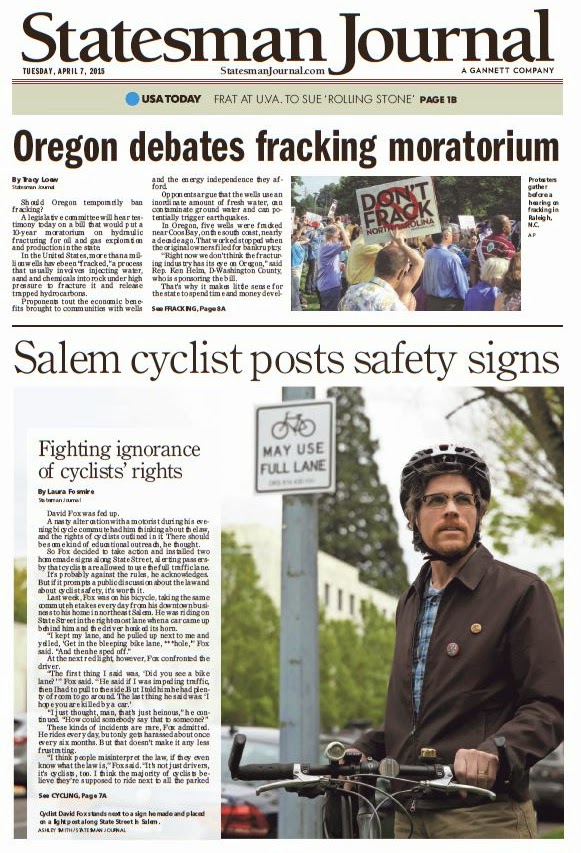 The other day I saw an ad and a blurb for a book that might be interesting, Seeing Green: The Use and Abuse of American Environmental Images.

From the University of Chicago Press:


Considering a wide array of images—including pictures in popular magazines, television news, advertisements, cartoons, films, and political posters—[Finis Dunaway] shows how popular environmentalism has been entwined with mass media spectacles of crisis....he focuses on key moments in which media images provoked environmental anxiety but also prescribed limited forms of action. Moreover, he shows how the media have blamed individual consumers for environmental degradation and thus deflected attention from corporate and government responsibility. Ultimately, Dunaway argues, iconic images have impeded efforts to realize—or even imagine—sustainable visions of the future. [italics added]

It seems to me that the imagery on the front page about David Fox's signs and the way the story is framed up participates at least a little in this deflection.

I wonder if the front-page placement and hints of heroic imagery might actually diminish the topic - and introduce an element of irony and sensationalism. (Certainly the TV coverage seems to go in this direction.)

Now the story is about a plucky individual and his quixotic quest instead of about a structural and systemic problem with a regulatory environment and the way we think about, fund, and construct transportation facilities. (We're not talking about the Engineering Guild and the MUTCD's prohibition on an otherwise reasonable sign, for example.)

You might say this personalizes the problem and makes it real. It tells a story. Some of the online comments to the story are appreciative along these lines.

But maybe this treatment tames the problem, too.

Is the problem that individual drivers aren't sufficiently aware of people on bike and the relevant laws? Or even individual bad actors who intentionally disregard the laws and people on bike?

Or is the problem that we have a transportation system that by design systematically subsidizes drive-alone trips and systematically disadvantages nearly all other travelers.

The fact that our "design speeds" for roadways are almost always 10 or more mph over the ostensibly "intended" and posted speeds is a powerful cue to drivers that they should expect to speed and expect unimpeded progress. That's the baseline and norm.

We say "be nice" and "share the road" but we design for unimpeded speed and power. There's a deep mismatch, even contradiction, between words and as-experienced roadway conditions.

The answer here, it won't be hard to guess, is to see a system problem more than individual bad actors or individual actors of good faith who just don't know any better. We have a system whose on-the-ground design implicitly encourages a disregard of what we say.

There are other issues, too. Here's an unambiguous bad actor.

A week ago an angry autoist apparently pulled a gun on kids who might have been jaywalking.

This was not front page news. Yet it resulted in an arrest, and by many measures it would be more news-worthy than some guerrilla signage.

There are probably other elements in play here, too. Maybe class or ethnicity.

We want to cite this situation as an exception, as a rare bad actor. And yet while the autoist's anger was itself disproportionate, it is similar in kind (but not degree of course) to the anger expressed in online comments.

When we design roads for speeding, when we evaluate intersections with a Level of Service goal for "free-flowing" cars - why are we surprised that people might get angry when these conditions and expectations are frustrated by people on foot or on bike? Hydraulic autoism drives the expectations and is not consistent with a lot of our public rhetoric.

Next week there will be an interesting talk in Eugene about some of these matters. Adonia Lugo ran the LAB's Equity Initiative for a while - and I suspect there's an interesting story, probably not going to be made public alas, about why she left it. She's an academic anthropologist and writes about bicycling and its place in our cultural systems. Class and ethnicity are an important ingredient in that analysis, one that has been essentially invisible to advocates who have been mostly examples of what is humorously called the "MAMIL," the middle aged (white) man in lycra. Fortunately, this is changing! 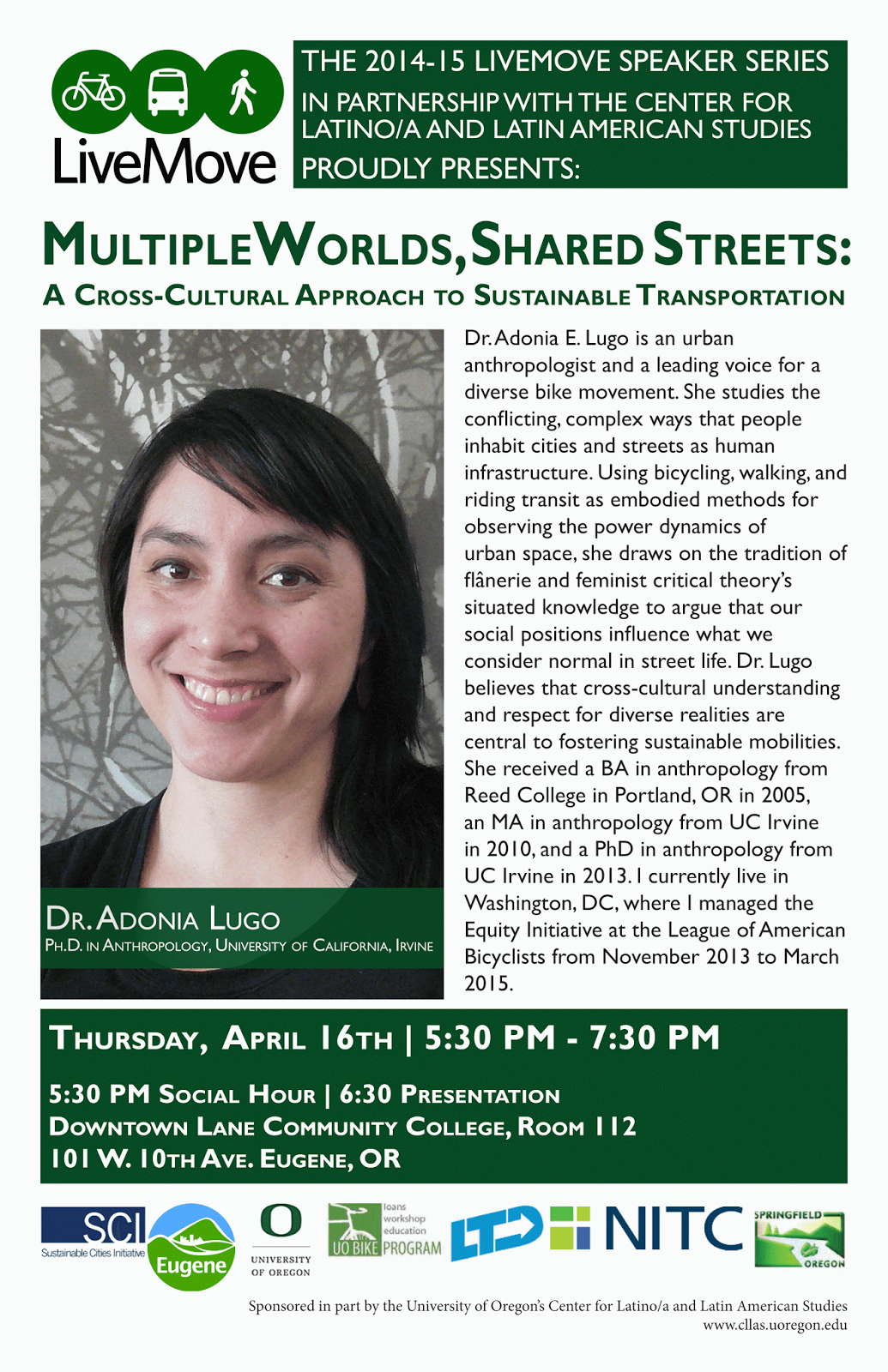 She'll be in Eugene on Thursday the 16th, and the talk could be very interesting.

A lot of the talk about "bad bicyclists" is actually talk about homeless people collecting cans or people with mental illness who rely on bikes for transport. Another large chunk of the rhetoric is code for Latinos or "illegals" on bike. Much of the talk about licensing people on bikes participates in some degree of animus against these classes of bike users. At the very least, they would be disproportionately affected by licensing. As we saw with Ferguson, law enforcement for jaywalking and other minor offenses is also not distributed evenly across class and ethnicity.

And there's the whole eight to eighty thing, where we mostly don't design for kids and the elderly.

Our transportation systems and analyses pretty much just exclude or vilify large numbers of people who depend or would like to depend on non-auto transport.

Anyway, it's a complicated stew of issues, and a lot of advocacy ends up flattening out and simplifying what is in fact not simple.

If you're interested in the topic - consider a visit to Eugene for the talk.

Update - here are Lugo's notes for the talk. Apparently a revised paper is in process. An excerpt:


Think of urbanism as a plethora of musical genres, from classic rock to throat singing to opera. And then you have expert systems that train individuals to hear distinctions in some of those genres. When experts spend years learning to make sense to each other, adopting shared ideas of what's good and bad, a potential byproduct is transforming untrained voices into something that doesn't sound quite right....

I've spent years studying and participating in the expert system of bicycle urbanism, and I'm interested in the way that advocacy-oriented bicycle enthusiasts identify themselves as an oppressed group who will benefit from street change but do not necessarily encompass other forms of oppression in their scope. I've found that the boundaries placed in bicycle urbanism sometimes make it difficult to show the relevance of other social realities to street activity. The agreed-upon causal relationship between built environment design and how people get around tends to overlook those individuals who do not or cannot comply with the city’s normative demands. These other bicycle users exist even in hostile streets designed without them in mind.

To me, this has shown that where we connect street activity to other areas, such as environmentalism or poverty, is culturally conditioned. Do we see streets as a Metropolitan Opera House, where only certain movements are deemed worthy of performance? The expectation that we'd only pay attention to street abuse when people who use streets are often oppressed in so many other ways shows that in bicycle urbanism certain situated knowledges give shape to the expert system.

What are the other styles for using public spaces that currently don't fit into an expert system? Think about protest as an illustration of how street action relates to other areas, as outrage spills into streets, the place I've heard some bicycle urbanists claim does not relate to racism, classism, and other forms of oppression.

Yes. And State St. is ridiculously overbuilt for the traffic it serves. We have regulations in the State Transportation Planning Rule that require bike lanes on arterial streets and similar policies in the TSP and city code. Yet year after year goes by and the City always finds a way to avoid action.

What we need is official recognition that making auto access a de facto requirement for full participation in life is one of the key injustices in our society, and an effective way to perpetuate and aggravate inequality.

As the UU Congregation of Salem put it:

And whereas, Salem's transit system fails to support full participation by all
its residents, denying this fundamental right,

Therefore, as concerned residents and religious communities in Salem, we call upon the Mid-Willamette Valley Council of Governments members to
recognize the denial of this fundamental right to participate, and to direct public resources to ensure that this region offers its residents a fully
functional transit system that allows them the ability to participate fully in all aspects of life in this community without regard to economic status.

"There’s a lot of reason to believe that the threat of being targeted by police (or other people) is a major and disproportionate barrier to biking rates among people of color. For example, 100% of African-American Portalnders in a CCC focus group in 2009 cited this as a factor that deterred them from using bikes."

Updated with link to notes for Lugo's talk.