The Legislature is chugging along, and for bikes so far it's mostly been small details and theater.


Hearing on mandatory reflective clothing bill is underway.. Looks like @JohnDavisforOR is wearing a vest! pic.twitter.com/4sRnqBe4WG

You may recall that our MPO has limited appetite to support Amtrak, and sure enough funding is at risk. The service doesn't move that many people by raw count, but it looms large as a symbol of alternatives to autoism in the I-5 corridor. Here's the Oregon Environmental Council on the prospect. 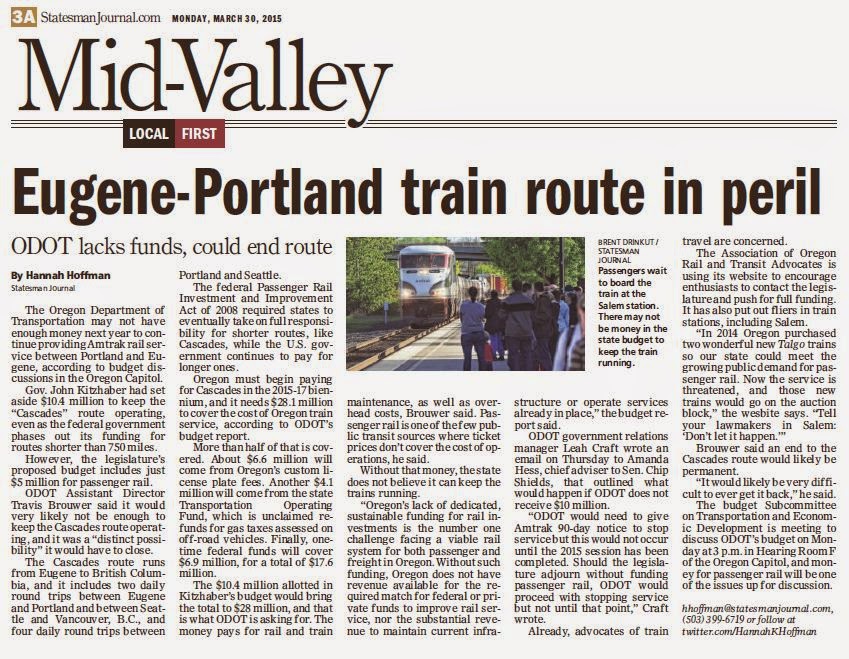 There doesn't seem to be any big headline transport news yet, so fair warning mostly blather here...

Milestones and movements are highlighted in green. (As usual, see more relevant bills or movement? Drop a note in the comments.)

Here's an interesting bill that got neutered with study churn, it looks like:
Specific bike things:
Other Bike-relevant and transportation bills:
Funding;
A few land use things of note (all of these have had hearings and look too be live bills and active, at least for the moment):
Carbon taxes looked like they were going nowhere, but some advocates think there might be hearings this month:
For all notes on the 2015 session, see here.
Posted by Salem Breakfast on Bikes at 10:00 AM

There is action on carbon pricing!

There's a hearing and possible work session on Tuesday the 14th.