We used to have a lot more neon downtown. And apart from the issue of energy consumption, it's hard to say that downtown is more lively and pleasant without the lights.


Of course they're almost certainly a consequence of the liveliness rather than a cause of it - but still.

On Monday the Grand Theatre had a proposal at Council to permit a bigger sign. It was postponed for a variety of reasons that aren't important here. 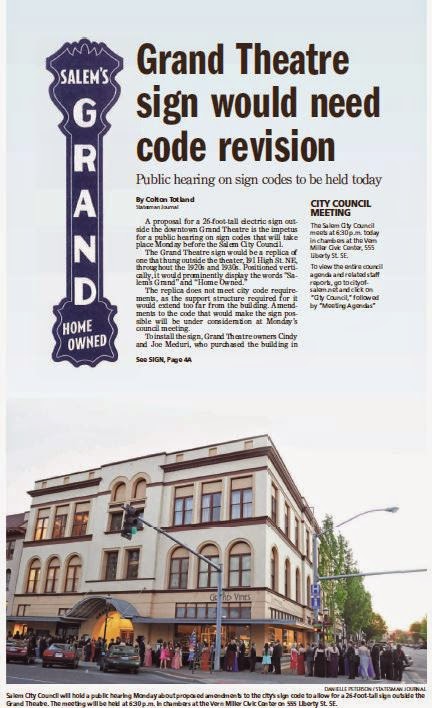 But it will be interesting to read more about it as it goes before the various groups for approval. It seems like this should get strong consideration. Maybe there are problems with it, but on the surface it seems like it could be a nice decorative and advertising element.

With the transit mall and Courthouse Square as well as the Courthouse itself largely inactive in the evenings, the corner of Court and High could use another jolt of energy. In addition to whatever business goes in where Grand Vines was, a neon sign could be a real focus for it, drawing the eye as it is meant to do.

In mood, effect, and sidewalk context, it is also very different from the Ross Sign on the mall that generated criticism a couple years back. Even a big sign here could still be scaled for both walking and driving traffic. (See those postcards!) The large corner bulb-out also works in its favor.

What do you think about more neon downtown?

Great idea SBOB. Just as long as they are solar powered: http://www.energydigital.com/renewables/3337/Las-Vegas-bets-on-solar-energy

The Grand has lots of good solar exposure and PV already installed. The sign should still be LEDs made to look like an old neon sign though.

The sign that should have been rejected is the hideous Bentleys sign at Liberty and Trade (facing south to capture all the cars heading north).

Neon has something that LED can never have. I fear that we would be invaded by an abundance of those garish LED signs that offend the eye and distract from the surroundings. People are beginning to 'avert their eyes' from such signs because they are so annoying. I know I do. If you want to turn me away from your business or cause, just put up one of those offensive signs.

The old neon signs are not all great, but they do have a charm about them when well done is quite attractive.

I did some research on Google and found that you can actually just put LED rope in place of the neon tubes and get the same look for less money. If some stores did that, I would be in favor of it.

Any more hideous signs like Dress For Less and I will have no place to put my eyes and might have to drive through downtown with my eyes closed....and I am thinking that is not good!