The deadline for bills to have a work session was last week, and so we have our first round of bills that "died in committee." None of them seem critical, and some of them represent topics covered by other bills that remain alive or bills that seem likely to be subject to gutting and stuffing.

But first, just having gone through an orderly transition at our State Capitol, it seems like we should join everybody else in observing today what was surely the Country's most disorderly and tragic transition 150 years ago.

There aren't many local papers digitized from this period, so Jacksonville is the closest we can come, I think. The Oregon Sentinel started out with southern sympathies, but early in the war it was sold and became a Republican paper fully in support of the Union.


business houses were closed and the doors draped in mourning irrespective of party. All countenances appeared sad, dejected and mournful, except a few secession traitors. One drunken secessionist gave vent to the feelings of a wicked and depraved heart by expressing joy at our great national calamity. A good Union man who heard him knocked him off the sidewalk.

The Chaff - Bills that died in committee, which we will no longer follow here:
Other bills appear to remain alive.

New milestones and movements are highlighted in green. (As usual, see more relevant bills or movement? Drop a note in the comments.)

Specific bike things:
Other Bike-relevant and transportation bills:
Funding;
A few land use things of note (all of these have had hearings and look too be live bills and active, at least for the moment):
Carbon taxes looked like they were going nowhere, but three of them were scheduled and kept alive. All three had hearings and "possible work sessions" yesterday.
Update, Saturday 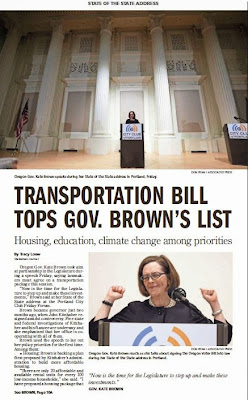 We'll see. It seems like a political convenience to utter "climate change" and "congestion" quite like this:

Her budget includes $56 million for a statewide water resources program.

"We cannot talk about prosperity and economic recovery without acknowledging the crucial role water plays in our quality of life and our livelihoods," she said. "Addressing the possibility of water shortages has been front and center since Day One."

Transportation: Congestion is making it difficult for workers to commute and for companies to get their products to market, Brown said.

"Looking ahead, however, the resources needed to operate, preserve and make much-needed improvements are non-existent," she said. "These issues are real, and they are statewide."

I would have liked to transportation more clearly in the context of "fix it first," the threat of big earthquake, and the need to transform mobility in the light of climate change and greenhouse gases.

Too much on "congestion" and not enough on "fix it first."

Of the carbon tax or cap bills HB3470 is scheduled for a Work Session on April 21 at 3 pm (House Energy & Environment Committee). This bill was modeled after California AB32. It will put Oregon's carbon reduction plan into law and require the Environmental Quality Commission to develop a plan to make this happen by examining a variety of measures including cap and trade with the possibility of joining the California-Quebec cap and trade market (soon to include Ontario also). In the absence of consistent federal policy states are taking the lead in measures to reduce greenhouse gas emissions.

As described in testimony at the April 14 hearing, California has been able to use revenue from permit auctions to invest in programs to improve energy efficiency and expand renewable energy. RGGI, the Regional Greenhouse Gas Initiative in several states of the US Northeast has also effectively returned revenues to communities to improve energy outcomes.

HB3470 also requires measures to mitigate hardship for low income people during the transition to a renewable energy economy.

HB 3255 - formerly for reflective clothing, now instead adding a requirement for a rear light for nighttime bike riding, passed the House 44-14.

Thanks for the updates!

Here's some good news in an update from Cherriots:

From the Subcommittee Minutes for the board meeting on the 23rd: