The Mid-Willamette Valley Area Commission on Transportation skipped April, but you may recall the discussion of bikes at the March meeting. MWACT resumes with a meeting tomorrow, Thursday the 7th, and they'll be talking about the State 2018-2021 funding cycle.

The minutes from the March meeting are interesting (minutes, agenda, and meeting packet here). 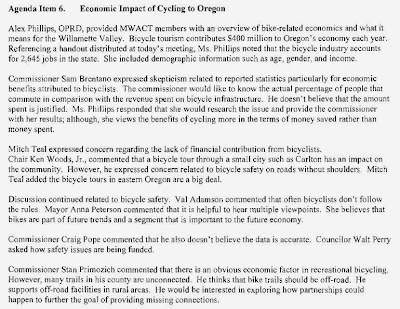 Lots of skepticism and complaint about bikes:


Commissioner Sam Brentano expressed skepticism related to reported statistics particularly for economic benefits attributed to bicyclists. The commissioner would like to know the actual percentage of people that commute in comparison with the revenue spent on bicycle infrastructure. He doesn't believe that the amount spent is justified....

Mitch Teal expressed concern regarding the lack of financial contribution from bicyclists....

Shifting to the May agenda, there's a map with a proposed "150%" list of projects (the expectation is a third of them don't get funding) for the "fix-it" portion of the 2018-2021 funding cycle. 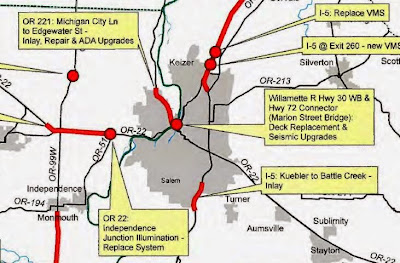 The two projects actually in Salem, on Wallace Road (OR-221) and on the Marion Street Bridge, look more like extensions of existing projects rather than new, unfunded projects seeking funding.

Unfortunately there's not enough information in the summary report to parse this out.

The bridge project in particular deserves more detail, as it is has a $12 million estimate and includes work to "upgrade seismic features." The dollar amount looks too small to be a full "cascadian mega-quake" retrofit, so the superficial reading here is that it would be a partial reinforcement to a medium-sized quake standard.

It's not clear how actually useful that would be.

And in more pleasant trivia, here's something about one of the MWACT commissioners from Saturday's paper: 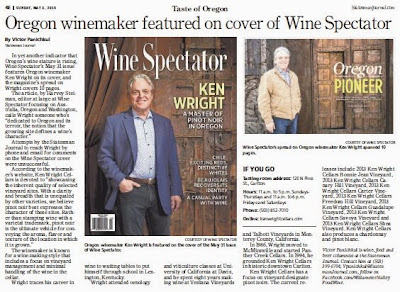 NGRAB also meets on Thursday, and on the agenda is a visit from the Salem Bike Boulevard Advocates. The main proposal for a Winter/Maple Street bike boulevard alignment is intended to connect with Salem Industrial Drive and the Kroc Center, so NGRAB should be interested.

Also on the agenda is a more detailed look at the RTSP and projects in or near the neighborhood.

Finally there is an update on community response to the Portland Road project. I don't think there's anything really surprising in it - though it's interesting to note that residents rank sidewalks and bike lanes a little higher than do employees or employers, who most likely drive to their destinations.

The North Gateway Redevelopment Advisory Board meets Thursday the 7th at 8:00 AM in the Center 50+, Classroom A, 2615 Portland Road NE.
Posted by Salem Breakfast on Bikes at 7:00 AM

Regarding a Marion Street Bridge seismic retrofit, State Bridge Engineer Bruce Johnson told MWACT on August 6th of last year that a full seismic retrofit of the Marion St. Bridge would cost $22 million. We assume he was talking about the highest "megaquake" standard. So $12 million would not be enough.