Bike Boulevards and other Bits in the News

It was a great way to start National Bike Month to see bike boulevards on the front page! 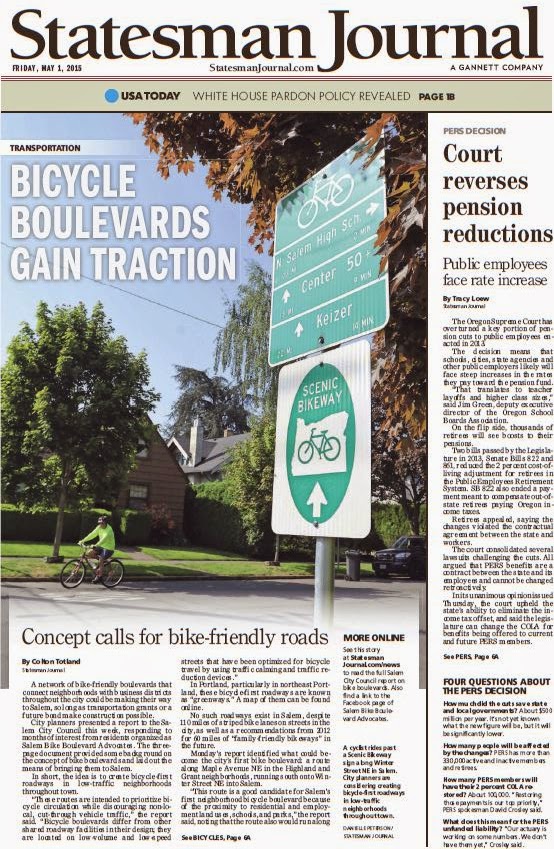 But is there already at Council a current and subtext of bike as symbol in the culture wars?


At the meeting Monday, some city councilors cautioned that the bicycle infrastructure proposed in the report should not come at the expense of other services to the community.

"As much as I'd like to have bicycle infrastructure today, that's at a sacrifice of having enough police, firefighters, whatever else," said Councilor Daniel Benjamin of Ward 6.

Fernandez responded by saying general funds, which pay for police and firefighters in Salem, historically have not been used by the city for cycling infrastructure.

"I don't think council would ever be asked to sacrifice general funding for bike boulevards," Fernandez said. "We have a tradition of not using general funds for these projects."

If Councilors are positioning bike transport as parasitical on police and fire departments rather than as a cheap way to relieve congestion and improve healthy living - well, we've lost the framing.

We have to get to a place where we do start thinking in terms of human capacity for all road users rather than vehicular capacity solely for car users. We need fewer cars on the road and more people using the roads!

The general issue of bikes makes it to the front page every few months, but genuine "traction" has seemed elusive, so it will be interesting to see if this time things do actually gain a meaningful foothold.

The trip is the afternoon of Sunday, May 17th. The trip assembles at Upcycles on 909 NE Dekum St., in the Woodlawn neighborhood, at 1:30pm.

Update - in the comments, Susann mentioned a KATU story. Here's a link: 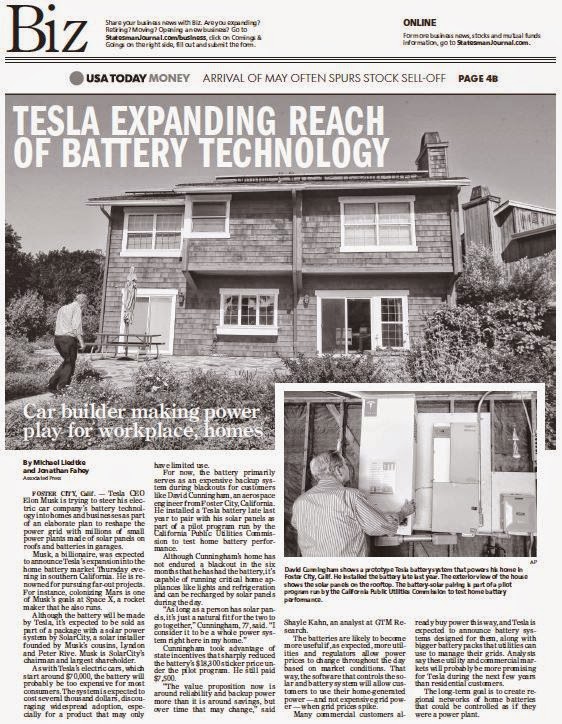 Electric cars are still cars, and there are good reasons to be skeptical of them as they reinforce the autoist paradigm of the drive-alone trip. (Also, what's old is new: Here's a note on Sally Bush and her electric car.)

Tesla clearly has bigger ideas than just cars, and since batteries and storage are a central part of the electric car, it makes lots of sense to leverage that expertise in other areas.

Tesla's luxury electric cars really could be a Trojan Horse for meaningful changes in our energy paradigms. If you're not paying attention to Elon Musk and his crazy ideas, you might be missing out on a genuine Edison-level transformational figure. It's not necessarily important that he has "the right answers" now; it's that he's something of a Schumpeterian inventor who may be changing the market in fundamental ways. Maybe he will have the right answers, or maybe a competitor will. But the facts seem to be that there's some real transformation going on and his work is at the center of it.

And finally - it's almost certain to be a theme this spring, summer, and fall: Drought and climate change.

I wasn't too happy to hear that statement from the council either. Pisses me off that they would automatically go with the "this is not essential so F'off". The tragic thing about it is though that walking and biking should be and is essential for humans to actually be happy and healthy, most people don't realize how much better off they would be if they actually tried it.

Councilor Benjamin received 93% of his campaign funding last year from the Chamber of Commerce, Realtors and Home Builders. So don't expect him to be any more than a champion for the status quo.

Channel 2 last night had a good story on separated bike lanes in Portland. Illustrated that alternatives are possible for Oregon streets. Advocate made the point that we need to get more people out of their cars because we can't keep building more roads, It was nice to see some real examples. I would like to see a few blocks in downtown Salem converted with protected bikes lanes just to show how well it can work.

They pointed out each of the separated lanes was actually cheap to do. In some cases it was just a matter of some paint on the street and moving where cares park. In other cases, it was planters that made the street look nicer as well as being safer.

Regarding Councilor Benjamin....I think he has a lot to learn. Let's keep trying to educate him!

Thanks Susann! Added a link to the KATU story.