Zoning is on the agenda at the Planning Commission tonight, the 19th, and it's a fine example of our "exclusionary zoning" scheme.

The school district wants to consolidate some programming into a centrally located building. The proposed site's zoning, however, doesn't allow for "Basic Education" in a "Commercial Office Zone." That's an excluded use.

The site in question has been vacant for a bit and is on the southwest corner of Market and Commercial Streets NE. Nearby businesses include Truitt Bros. Cannery buildings and the Chamber of Commerce. 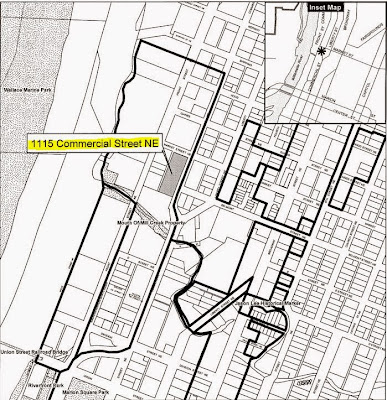 The School District proposes to consolidate Community Transition Programs, which serve "adult students with disabilities who have completed high school with a Modified or Extended Diploma or Certificate of Attainment," but who need additional skills or training; as well as the Literacy Center that is part of the Barbara Roberts High School.


[S]tudents [in the CTP program] arrive and leave school by school bus or on rare occasions are transported by a family member...students in [the] Roberts High School programs currently arrive at and leave the school by a variety of means. 40-50 are driven in private vehicles, and about 40-50 take public transit. Fewer than 10 students drive themselves, and a similar number use a bicycle.

Some additionally walk, but as the site locations are changed, they may not be able to walk and will use other means.

While the building site is centrally located, "centrally" in this context may have more meaning for cars than for non-auto travel. The immediate north-south streets, Front, Commercial, and Liberty aren't really very congenial for travel on bike or on foot: Front lacks sidewalks and bike lanes and has the treacherous railroad tracks; Commercial and Liberty are a one-way couplet, essentially an urban highway, and though they have bike lanes and sidewalks, they aren't very friendly, and are not rich with east-west crossings.

Especially for Grant and Highland neighbors, connectivity isn't awful, but for those who must come farther, perhaps a site nearer the transit mall would be even better.

But that's not really that important of a detail, especially since the numbers of students aren't that great, and presumably the District has other good reasons to consolidate program locations. (There are lots of other factors in play here.)

The interesting part here is the rigamarole the District has to go through because of our zoning system.

Seriously, why wouldn't you allow an alternative school to use a commercial office building that has languished for a while? Is there any serious case to be made against this?

(The Staff Recommendation is for approval and to advance the ordinance change to a first reading at full Council.)

This situation is an excellent argument on the surface for so-called "form-based codes," which specify building type and form rather than use of a building. They focus on what the thing looks like rather than what you can or cannot do inside of it.

In this case, a low-rise office/warehouse building - a box - that has been vacant for a while seems like a reasonable thing for an alternative school. They won't pollute, they won't create industrial noises, they won't hold parties at midnight. Seems like a very low-intensity use.

And making the School District apply for a regulatory change seems like a dumb level of red tape and city ordinance.

Part of our problem with creating walkable and bikable neighborhoods and commercial districts is our "sort and separate" exlusionary zoning, which tends to inhibit useful adjacencies and creative reuse of existing buildings.

(There is also the extension of the "Unified Development Code" clean-up project, which identified 52 additional issues that were not "policy neutral" and need further debate and possible change. These have been dormant for a bit, and I guess we will see something from staff perhaps later this year.)
Posted by Salem Breakfast on Bikes at 12:01 PM