The weekend did not start off well at all. One more person on foot was killed by a driver. 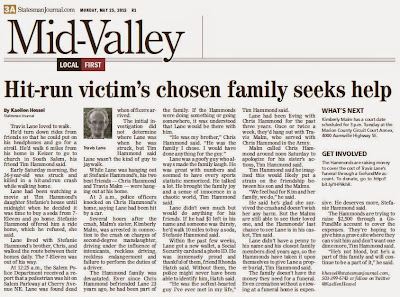 The initial story about Travis Lane didn't have much detail.

But the next day's story (clip above) has utterly desolating detail:


At 12:25 a.m., the Salem Police Department received a report that a pedestrian was hit on Salem Parkway at Cherry Avenue NE. Lane was found dead when officers arrived.

The initial investigation did not determine where Lane was when he was struck, but Tim Hammond said Lane wasn’t the kind of guy to jaywalk.

At 3 a.m., police officers knocked on Chris Hammond’s home, saying Lane had been hit by a car.

Several hours after the crash, Malm’s sister, Kimberly Malm, was arrested in connection to the crash on charges of second-degree manslaughter, driving under the influence of intoxicants, reckless driving, reckless endangerment and failure to perform the duties of a driver. [italics added]

The hit-and-run compounds the error, but crossing the Parkway at night, even in a marked crosswalk, and even with sober drivers, is treacherous: There's no room for error.

For drivers at highway speeds, reaction time + stopping distance makes it nearly impossible to avoid other objects in the road. Add impairment to reaction time and there may have been no correction whatsoever.

For people on foot, highway speeds are certain to crush and kill you. (Remember, even at 40mph, a car is nearly certain kill a person on foot.)

If an urban highway like the Parkway is engineered with gentle curves and some forgiveness for drivers who make steering or speeding or stopping errors, they have no engineered forgiveness at all for other users of the road.

That the driver was almost certainly not a stranger, and would likely know of Lane's walking habits, is a cruel, cruel irony.

But it underscores the dangers of speed and autoism. Cars kill. Full Stop. Traffic speeds in urban areas should not be highway speeds.

I think this is the fourth walking death this year. Drivers killed The Crosslands and David McGregor while they were out walking in January.

(Jeffrey Tumlin gave a talk in Salem two years ago, you may recall.)

Additionally, McNary students apparently leaving school for the weekend crashed on Lockhaven. From the magnitude of the crash and resulting injuries, it seems difficult to conclude the kids were observing safe neighborhood speeds.

My two thoughts on these incidents are:
- The Salem Parkway should have progressively slower speed limits and narrower lanes starting from the Cherry Street intersection west.
- High school students should not be allowed to drive to school. Walk, bike or bus there. BTW Keizer allows for too much parking at schools.

From an update on charges in the paper today:

"Malm was originally charged with second-degree manslaughter, failure to perform the duties of a driver to injured persons, driving under the influence of intoxicants and reckless driving.

Last week, she was charged with first-degree manslaughter, failure to perform the duties of a driver when property is damaged, vehicular assault of a pedestrian.

The failure to perform the duties of a driver to injured persons charge was removed from the charging document."

An update from the paper today:

"The trial for a Salem woman accused of striking and killing a pedestrian with her vehicle was cancelled and the charges against her were dismissed to allow for further investigation, officials said....

Malm's attorney Jason Thompson said an extensive investigation revealed Lane's death may have been the result of suicide. The accident reconstruction by seasoned investigators put him in Malm's lane of travel at the time of the crash, and Thompson said they found something resembling a suicide note written by Lane in his belongings....

On Wednesday, the Marion County District Attorney's Office filed a motion for dismissal of the charges without prejudice, stating the interest of justice called for the charges to be dismissed....

Because the case was dismissed without prejudice, prosecutors will be able to re-file charges. The district attorney's office confirmed they were continuing to investigate the crash, but said it would be speculation for either party to say Lane's death was a suicide."