The final recommendations of the "Blue Ribbon" Task Force on the Police Station and Civic Center will lead at Council for most, but others will have much better things to say. (So do read and consider them!) As the City summarizes it in a separate press release:


While the entire civic center complex needs seismic improvements, the task force recommended that the police station should be the priority. Police occupy cramped quarters on the civic center's bottom floor.

From our perspective here, the most interesting item on Council's Tuesday agenda - delayed a day because of the holiday - is the proposed street vacation for the Goodwill development at the corner of Edgewater and Wallace.

The Staff Report urges approval, but with a few conditions. In the Report is also a bunch of emails with Councilors and the Mayor, disclosed in order to avoid any ex-parte contacts in this quasi-judicial hearing. It doesn't look like there's anything really interesting in them, nothing about why there was opposition in the first place. Mostly they are about the maneuvering between March 9th and March 23rd to get the matter reconsidered after the initial vote to deny. (Maybe you will spot a more relevant detail?)

The conditions that staff recommend attaching to the vacation indicate the gathering momentum behind Second Street and the proposed crossing under Wallace Road:


So the recommendation is to attach conditions (1-4) or (1-3 & 5), but not both 4 and 5, which as a pair are basically a commitment to a block-long improvement of a section of Second Street along the abandoned railroad line.

The developer can satisfy this commitment either by building the street or paying for it, and the City says the fair value of that construction is an assessment of $172,289.

All this seems like a decent enough way to chunk progress on the overall project for the undercrossing.

If there remains opposition or significant critique, it will be interesting to learn more. But on the surface this seems like a solid compromise and way forward.

(Additional notes and history on the proposals for Goodwill and Second Street Undercrossing are tagged "Edgewater District" generally.)

There's a couple of history things. The Hearings Officer has ruled on the Lord & Schryver garden and museum project, and it seems like things have been settled amicably. The Conservancy will lease parking spots from the Derby Track lot and install bike parking. The change of use in a residential area is approved. The City's legislative positions also includes an endorsement for a House Bill similar to Restore Oregon's "Revitalize Main Street" act, SB 565, which would have created a tax credit for rehab of historic properties. Unlike SB 565, House Bill 3526 is not stalled and looks like it may move forward. It appears to be smaller in scope and to use lottery dollars for grants rather than tax credits.

Possibly related as a general history/cultural thing is a proposal to adjust the City's allocation of cultural and tourism funding. It's only $30,000 and a guess is that the Conference Center is going to take a larger share for operations, but the entity benefiting from the adjustment is not disclosed.

And Council will hold a Public Hearing on expanding the "no smoking" areas. 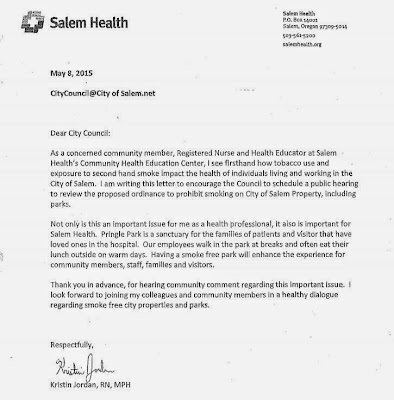 Salem Health has a letter in support of extending the smoking ban, and I look forward to the day when they are as zealous about pollution from cars, about the health costs of sedentary autoism, and about death and injury from auto crashes. Car use and its associated land use patterns should be a matter of public health as well!

Some future dates to consider...