City Club to talk Water and Drought on Friday

Remember that report on water flows, snowpack, and ways our drinking water will be impacted by climate change from a couple years ago? 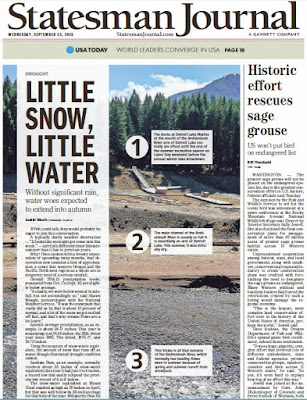 There's a nice graphics feature with a series of before/after images and with a slider to toggle between them.


I spent the summer documenting the #drought in #Oregon. View this on your computer for an interactive slider. http://t.co/WG5wgPnImX
— Brent Drinkut (@BrentDrinkut) September 23, 2015

It'll probably be more about water management and less about the antecedent causes and exacerbating factors of climate change, but it's still important. As we built out places like the Mill Creek Industrial Park with promises of copious, and cheap water, maybe we need to rethink priorities.

Did you know Salem has the largest state-certified industrial land on I-5 between Sacramento and Seattle? http://t.co/AsWy7beB7z
— Salem Planning (@Salem_Planning) July 17, 2015

This is a link to an Oregon Business story about the Mill Creek industrial park. From the piece:


Assets include more than land.
“One reason food processors are interested is that we have an abundant quantity of water,” Arthur says. “Mill Creek can supply more than 1 million gallons per day, and that can expand.”

Are we sure Mill Creek can supply this in addition to supplying drinking water for Salem? There look to be strong reasons to doubt this.

We will also need to think about how we subsidize and depress markets.

In a response to the Pope's encyclical, Laudato Si', William Nordhaus writes:


Putting a low price on valuable environmental resources is a phenomenon that pervades modern society. Agricultural water is not scarce in California; it is underpriced. Flights are stacked up on runways because takeoffs and landings are underpriced. People wait for hours in traffic jams because road use is unpriced. People die premature deaths from small sulfur particles in the air because air pollution is underpriced. And the most perilous of all environmental problems, climate change, is taking place because virtually every country puts a price of zero on carbon dioxide emissions.

On the surface it sounds uncharitable, even unjust, to price things like water. But if you remember Jeffrey Tumlin's witty remarks about the difference between a Soviet bread line and an American market in our approach to parking, many of our problems are caused by under pricing valuable things and making people wait in line, actual or metaphorical. If people at the bottom of a market need support in order to enter that market, appropriate subsidies or supports can be arranged, and then the market can still sort out a more efficient aggregate delivery.

Over at the Upright Cyclist, B+ laments the price tags that we have put on trees, especially as they might tend to reduce a tree to its use value only. And indeed sometimes it seems mean and cheap to price beautiful things that have intangible value. But we also waste good things because they are cheap. Maybe we would cut down mature trees less quickly if they were priced - if, in addition to the value for stormwater, health, and property assessment, the decades or centuries it took to grow them were also captured in a price signal. And maybe the more systemic problem, even, is that we don't price bad things we want less of, like pollution.

Making water more expensive seems like a hardship, but if we don't start now to build systems and habits of using water more efficiently, in a generation when we really face scarcity, it will be that much harder and the rupture that much greater.

The City Club meets at Mission Mill and doors open at 11:15am, Friday the 25th. (Registration looks closed, so I don't know how strict they are about letting people in.)
Posted by Salem Breakfast on Bikes at 12:01 PM

Email ThisBlogThis!Share to TwitterShare to FacebookShare to Pinterest
Labels: Advocacy, Drought and our Water Supply