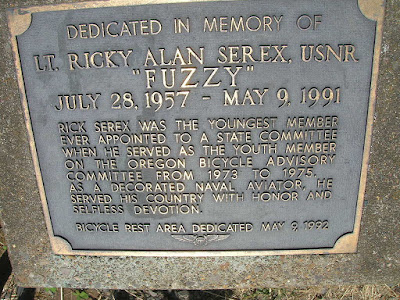 If you've gone out west on Highway 22 along the sidepath and then crossed over to Rickreall Road, you might have noticed the plaque at the small wayside on a rise across from the golf course at the landing for the overpass.*

Dedicated in memory of
Lt. Ricky Alan Serex, USNR
"Fuzzy"
July 28, 1957 - May 9, 1991
Rick Serex was the youngest member ever appointed to a state committee when he served as the youth member on the Oregon Bicycle Advisory Committee from 1973 to 1975.
As a decorated naval aviator, he served his country with honor and selfless devotion.
Bicycle rest area dedicated May 9, 1992.

Serex was flying a Navy bomber on a training mission and crashed in a remote and mountainous area of West Virginia.

Two decades earlier, he loved his bike and was also a supporter of the Bike Bill. According to a story from May 7th, 1971, Serex joined riders from Portland at the Capitol in support of House Bill 1700.

In the man, the naval aviator, it's not hard at all to see a boy who loved speed and raced school buses on his bike.

It recalls Henry Charles Beeching's poem from the 1890s:


Alas, that the longest hill
Must end in a vale; but still,
Who climbs with toil, wheresoe'er,
Shall find wings waiting there.

And we remember the Wright Brothers had been bike mechanics.

Bicycles and the idea of flight have long been associated.

A couple of years after passage of the bike bill, with some new legislation in 1973 members were appointed to the first Oregon Advisory Committee on Bicycles. In 1975 the members were:

(Eugene's strong presence on the committee, including a future mayor of Eugene, was surely an ingredient in all that they built out a generation and more ago.)

Today the Committee's successor is the Oregon Bicycle and Pedestrian Advisory Committee, and the youth member, required to be under 21, has been a college student rather than high school student. Some of the philosophy is also changing. One of the most crucial changes, one with which we are still struggling mightily, involves downtowns and commercial corridors:


Suitable space for bikeways in downtown commercial areas is expected to become less available. The space from curb to building front is occupied by crowded sidewalks, which puts bicycles in the street with motorized traffic. For velocity pars to exist in heavy downtown traffic, autos function in the lower gears while cyclists ride at or near maximum performance. Thus only the most athletic of cyclists can negotiate downtown streets in comparative safety. Cities cannot be expected to willingly sacrifice metered curbside parking for bikeways. [1975]

One virtue of the older report is a comparative directness. It calls out bluntly the problem of speed and cars for "the most athletic of cyclists" as well as the problem of curbside parking in its nascent rhetoric of multi-modalism. Some of our contemporary rhetoric is usefully softer on the edges, but it also mystifies or over-promises from time to time. We trumpet bits of good infrastructure as terrific, but by themselves they do not alter systems.

The wayside seems to enjoy a nice bit of bike traffic, as it is an important gateway to Polk County for Salemites and those passing through, and many have left messages in a notebook there.

Next time you pass by, take a moment to remember Ricky Serex and his role in Oregon bikeways.

And take a look at the streaming traffic on Highway 22, and think also of how far we have yet to go.
* It is interesting also that this site appears to be the original location for the Pentacle Theatre, according to notes that it "began its life in 1954 in a barn on Highway 22 across from the Oak Knoll Golf Course"! There's a curb cut and driveway to nowhere adjacent to the overpass, and it seems likely that marks the place. It may be that this also is an important site of local artistic creativity as well. Highway 22 sucks the energy, but the hillock also has its own, nearly autochthonous, energy as well; as wayside it is also a good place for a kind of shrine, amenable to remembrance or prayer.
Posted by Salem Breakfast on Bikes at 9:00 AM

Thank you so much for posting this - Rick Serex is my dad, and I was digging around on the internet for something else when I came across this article. I"m happy to report that passed on his inherent love of two wheels to me, and reading more about his time on the Oregon Bicycle Advisory Committee provided just another small insight into a man I'm still learning about. Even more ironic that this was posted on my birthday. Anyways, thank you for taking the time to write this and help people know a little more about the man who's memory provides them rest. -Catie

Catie,
I knew your dad when we were kids at First Methodist church in downtown Salem. My sister found an old newspaper clipping of a quartet of us singing next to a stained glass window as six or seven year-olds. The picture got me thinking about your dad and spent some time Googling his name this morning. I remember him as a fun and "cool" friend at church, though we didn't do much outside of that venue. I bumped into him few times over our high school years, but that was the last I saw or heard of him until I read about his passing I had lost another friend from that same group of church friends just about 11 years prior and it hurt again when I found out about your dad.
If you get this message and are interested in getting a copy of the picture my sister found, please contact me at keizermark@gmail.com.
Regards,
Mark Jones