Join the Salem Area League for the Bike Commute Challenge

If you're doing the Bike Commute Challenge this month, be sure to join the Salem-area League! 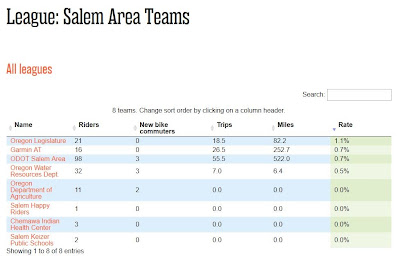 There's only 10 teams in it right now, but there should be more! There are 27 teams with the word "Salem" in them - and you know there are more Salem-area teams that don't necessarily have the word "Salem" in them. Joining the league is one of the best ways make it local and get out of the insistently PDX-centric nature of it all.

With Cherriots conducing the "individualized marketing" project in the Grant and Englewood neighborhoods, this year there's more local institutional support and interest than in previous years, and if you're on the fence about it, it might be a good time to try it out.

There's also a very nice piece over at BikePortland about the importance of the social dimension trying out a bike commute and then starting to make it a new habit. There's a very real way the fun in bike commuting is contagious and magnified in numbers.

Whether you're a rider or an employer, whether you're thinking about trying bike commuting for the first time, or you're an experienced rider, the Challenge is for you.