Conflicting Narratives about Walking Jostle in Story on Memorial to Crosslands

On Sunday the paper had a piece on the bench installed at Englewood Park as a memorial to Christine and Michael Crossland, whom a driver in a pickup struck and killed as they were walking along Market Street in January.

It starts briefly on the front page, and the bulk of it is continued inside: 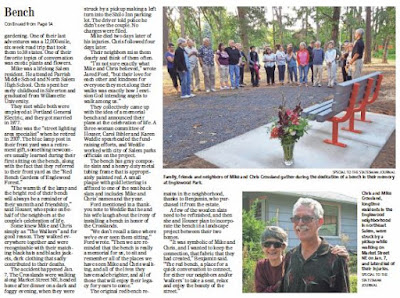 Mostly the piece is lovely, but the piece also engages in some questionable victim-blaming:


Some knew Mike and Chris simply as “The Walkers” and for good reason. They walked everywhere together and were recognizable with their matching black hats and blacks jackets, dark clothing that sadly contributed to their deaths.

The accident happened Jan. 7. The Crosslands were walking along Market Street NE, headed home after dinner on a dark and foggy evening, when they were struck by a pickup making a left turn into the Shilo Inn parking lot. The driver told police he didn’t see the couple. No charges were filed.

Once again our commitments to hydraulic autoism and the traffic cone theory of walking interfere with our ability - or more insidiously sometimes enact a refusal - to recognize the direct claim people on foot have to using the roads as part of ordinary, banal, everyday activity. 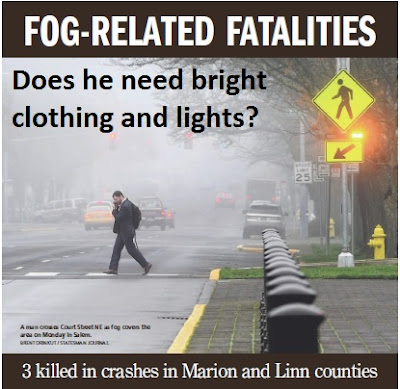 Instead, we tend to see it as a special, elective and consumerist activity carved out of discretionary time, funded with discretionary income, and signalled with special clothing and special pedestrian safety equipment. 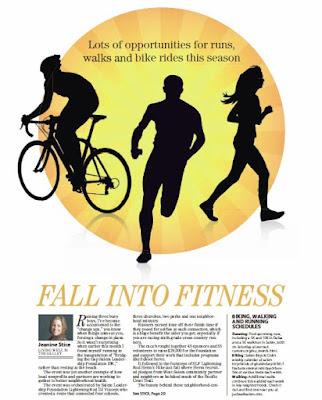 We also allow for situational blindness by drivers and absolve them when catastrophe ensues. "The driver told police he didn’t see the couple. No charges were filed."

But if you flip the narrative about "dark clothing," you can see how ridiculous it can be.

The pickup that killed James Alton on Friday was dressed in "dark clothing"! Alton didn't see the pickup. But the person on foot was still the one harmed. News reports don't say afterwards, "the walker told police he didn't see the truck."

The deck is always stacked. The burden is always on people to stay out of the way of cars. In each case it is the person on foot who pays the ultimate price for roadway error. 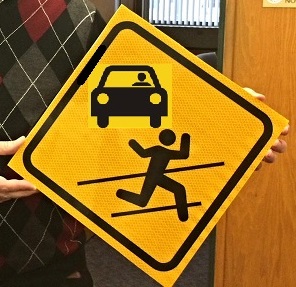 A better approach would focus on the legal and civilized claim that people on foot deserve a full share of the public space we call "a road," would recognize a fundamental asymmetry in vulnerability and power, and would ask drivers and road designers to assume a greater burden of care for more vulnerable users like people on foot. Being dressed up like a traffic cone or a Christmas tree shouldn't be a requirement for using the sidewalks and roads.

You are correct in saying that this tragic accident had nothing to do with what the people were wearing. I know this area and I was (sadly) not surprised by the accident.

The crime here is not on the part of the pedestrians or perhaps even the driver of the truck. It is on the City who allowed such a poor design be implemented in this area.

I hope that the people who cared about the Crosslands will take up the cause of working on improvements to that intersection to make it more pedestrian friendly. I don't know if the neighborhood association in that area would be willing to help, but I think I can get some support from ELNA...we meet next week.

The design of that whole area is just terrible. It is dangerous for drivers and super dangerous for pedestrians. I try to avoid that interestion whenever possible, and especially at night and in the rain.

Some of the issues have to do with a street that it too wide for people to cross safely. Also, there are too many 'points of contact' by the way that the traffic is directed by the lights. Lastly, the lighting is very poor.

Due to the way that the street is sloped when there is rain, you actually can't see the lines for the lanes. The street lights are either set to high to illuminate the street and sidewalks properly, or they are of the wrong kind. Either way, you can't see. And on-coimg traffic blinds you!

The congestion is a contributing factor I think too. As well as poor placement of driveways. When I worked on the Lancaster Drive study back in the 1990s we decided that driveways needed to be situated so that they did not tempt people to cross several traffic lanes in order to enter a business.

Use of traffic control devices could have prevented that driver from even trying to 'dodge' across the traffic to make that turn. I think that they are warranted in this location.

We need to not let the Crosslands' deaths just be memorialized by a bench and say 'how sad.' We need to see if we can make the area safer as a tribute to their loss!