Happily, this summer sidewalk cafe life seems increasingly vibrant, and that is great to see.

But because of our legacy approach to bike parking that makes it part of the sidewalk furniture, this sometimes creates conflict over uses, and since bike parking is sometimes still under fairly low demand, it has been easy and convenient for merchants to encroach on the rack zone with their own furniture.

The recent removal of trees on High Street at DaVinci's has seemingly also meant the loss of bike racks here.

The rack used to get covered by a standing-level table, which cunningly used the rack for structural support.

If there is a meaningfully higher demand for sidewalk seating than for bike parking, it's hard to fault merchants for wanting to use the sidewalk for cafe life and the revenue it provides.

And for people who value a vibrant urban sidewalk life, we should have a good measure of sympathy for the merchants.

Sidewalk bike parking also conflicts with our ban on sidewalk biking in downtown. If we don't want bikes on the sidewalk, we should probably put our accommodations for bikes and those who used them where we actually want them. And at least downtown, that's in the street.

But we have nasty double-bind, actually: We have no effective provisions for them in the street, and we ban them from the sidewalk. It's made maximally difficult rather than easy! The real message encoded here is: Go Away and Don't Bike Here.

Other Random Bits about Sidewalk Life

Speaking of sidewalk life, is there any place in Salem where an old warehouse or other commercial building with a loading dock has been repurposed for restaurant seating or other quasi-sidewalk activity? (I can't think of one. Do you know?)

The old Vista Post Office at Triangle and Liberty has seemed like a strong candidate, and Front Street has all kinds of candidates - though this area is pretty barren, and will likely need some redevelopment before warehouses start to be reused.

At one of the Truitt Bros. warehouses on Front there was a great concrete imprint, stylistically reminiscent of the Civic Center and all that 1970s brutalism. 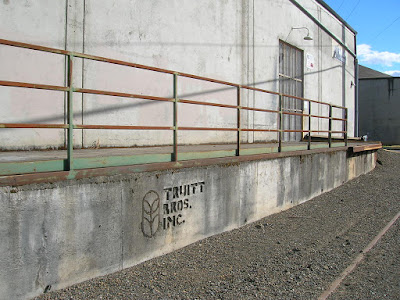 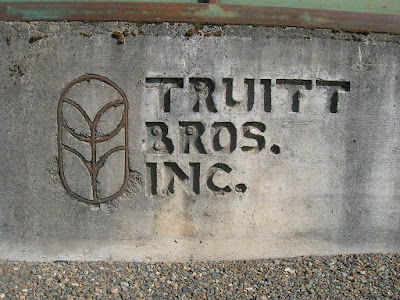 Because it is in an historic district, some of the new concrete sidewalk work near Bush Park has retained the 19-teens and 1920s sidewalk contractor imprints. They've cut out the old imprint and set it like a tile in the new concrete.

If these loading docks are not retained and repurposed, perhaps imprints like these can be retained so we can remember how much canning industry occurred at this terminus of the early "Garden Road" - which we now know as "Market Street" - the end of the line for farmers and produce.

Over at SCV a bit ago there was a note about the closure of the path along Pringle Creek from the Civic Center, under Commercial Street, and to the Boise project.

For about a year now, without making a formal public announcement about this, mostly buried in contract document language it has been clear the City has negotiated a public easement for only the northside path along Pringle Creek.

If you want to travel along the path system from the Hospital to Riverfront Park you'll need to use the Commercial Street bridge to cross from the south side along the Civic Center to the north side along the not-yet-contructed path segment to Riverfront Park. This will be a meaningful inconvenience. And the southside path segment directly under the bridge, and constructed with public bond monies when the bridge was replaced, will now become effectively privatized.

This is a disappointment and may represent a partial failure by City Staff to advocate effectively for the public interest. Ultimately, the City will need to explain why they could not secure an easement for both the south and north sides of the creek.
Posted by Salem Breakfast on Bikes at 10:00 AM

That stretch of Broadway is somewhat disappointing given the rack in front of Christo's is the only rack for the block (including the food trucks at Barrel & Keg.)

Good point! When Maynard's became Barrel & Keg, it didn't represent a "change in use" and so City bike parking requirements were not invoked (or at least that is what I believe is the process and reason). As you say, the lack of bike parking at Barrel & Keg and the food cart pod is a significant omission.

The North Broadway Parking Study (see brief discussion here and links to notes about the whole process) offers mainly advisory or aspirational guidelines for more bike parking in the district, but does not seem to have more hard-and-fast City policies or funding to ensure that more bike parking goes in.

At least there are new racks in the block face across the street from Barrel & Keg with the redevelopment containing Salem Cinema, so it's not a total bike parking desert.