Learn about some of Salem's Little Free Libraries on Saturday

Just off the Winter Street bikeway, a quarter of a block east on Belmont is one of Salem's Little Free Libraries.

As one of the activities scheduled for the Drive Less Save More project in the Grant and Englewood neighborhoods, on Saturday the 19th, Cherriots, ODOT, and other neighborhood advocates will lead a bike tour of the Little Free Libraries scattered around these close-in north and northeast neighborhoods. 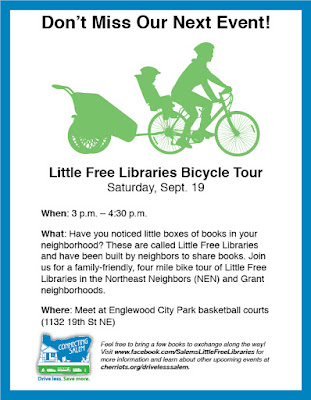 The ride departs from the Englewood Park basketball courts (1132 19th St NE) at 3pm, and will last about an hour and a half.


It will visit at least some of these, and perhaps more. The one pictured at the top, on Belmont, is not, for example, apparently registered here - so you may discover great bits of secret neighborhood lore. (And maybe a set of dueling libraries - Splinter groups! Schism! Rivalries!)

If you go early, birdwatching among the trees at Englewood Park is terrific for such an urban environment. Recently we saw there a Red Tailed Hawk seize and eat a juvenile (and invasive!) squirrel. We definitely cheer more for raptors than for rodents here, so that was a satisfying moment in the urban Animal Kingdom. If that seems cruel, there are also lots of pretty song birds there as well.

One infrastructure thing to note might be the barrier posed by the the railroad between the two neighborhoods. The bike ride will have to cross it on Marion, D, or Market Streets. D Street (above) is the easiest, but even with sharrow markings it's not easy and comfortable, and kids should probably use the sidewalk still. (The approach on Marion virtually forces you to use the sidewalk.)

So indirectly it might also be useful to think about how difficult crossings and the gaps they represent affect larger network connectivity.
Posted by Salem Breakfast on Bikes at 7:00 AM