City of the Future and Cranksgiving - Sunday Newsbits

Two pleasant notes in the paper are worth mention this morning.

Though it's all USA-Todayified, there's a graphic and article that summarizes some of the likely or possible changes in urban transport that are coming in not so very distant future. 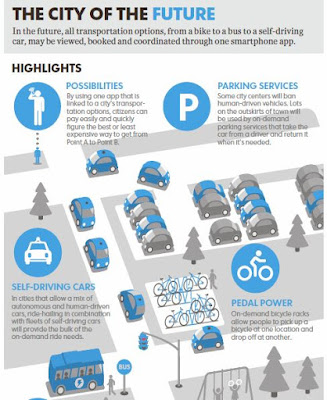 Of course there is uncertainty, and of course different folks will emphasize somewhat different features or directions, but it seems overall like a decent enough summary of a significantly less autoist and more multi-modal future that is not an outlandish and unlikely fantasy. In many cases these are features to leverage, not bugs to resist.Though it was interesting to see them filtered through the panopticon of the smartphone - the tech angle, not the lenses of urban planning and infrastructure, increases in the marketplace of transportation choices, greenhouse gas emissions, or the transportation toolbox and best tool for the job. It was framed up in the flavor a la mode of smartphone tech, and walking was a conspicuous omission.

There was also a terrific feature on Cranksgiving!

Cranksgiving happens all over the country. And scanning twitter yesterday, it seemed like the SJ might have been the first major media outlet to report on it. So that early online notice and this print version is nice to see! 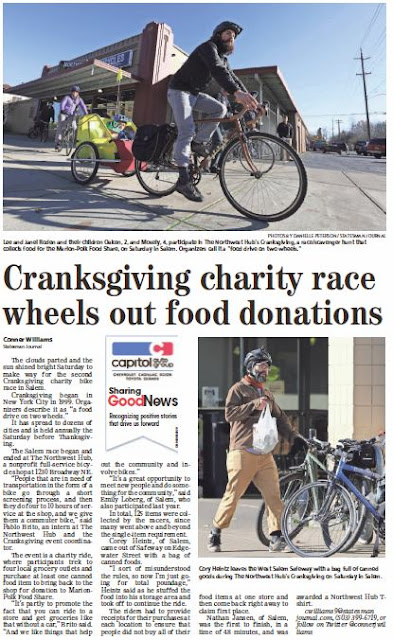 Newspaper from another era. Here's a Thanksgiving ad from a century ago. The vision of Uncle Sam sharpening the axe for one of the turkeys is a little grim, but the number and density of small neighborhood grocers is notable. Maybe the most interesting item is the Sunnybrook Dairy on Center Street. That's where the Wilson House is today, I'm pretty sure. According to their history, the Methodist Church bought the site in 1923.
Posted by Salem Breakfast on Bikes at 11:00 AM

And a note about the City of the Past - a Thanksgiving ad from 1915.