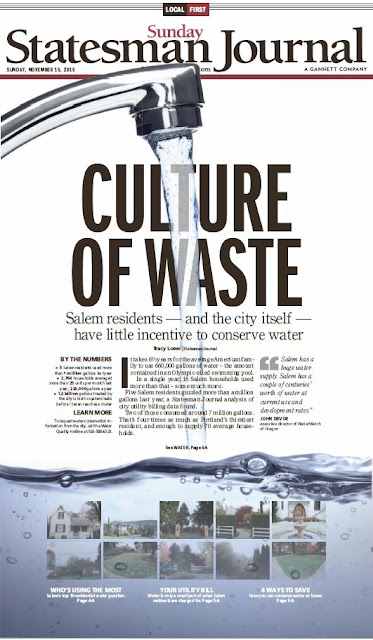 Kindof a funny front pager today. It's not useless or wrong, but it's also a little off target perhaps.

The first criticism of it when the story was posted online a couple of days ago was - Why start water-shaming residents now? It's raining hard today. The time for the story was earlier in the year.

More important is the problem of scale. Commercial water users almost certainly waste more water than residential users, so why not start with an analysis of Salem's biggest commercial users? And as a total proportion of water use, is it even useful to start shaming residents?

The lack of scale and proportion is a significant hole in context and analysis.

(Conspiracy-minded folks might think of starting with residents as another way to shelter the Chamber of Commerce. That seems unlikely, but it sure doesn't look very good.)

But that's not the most interesting angle here.

We have a much different culture of waste.

The most interesting angle here is this: Basically, if you substitute "road use" for "water use," you have a similar analysis of how we overuse roads and create congestion because "there's no incentive to conserve road capacity."

If tiered water rates make sense, similarly tiered road useage - congestion pricing - also makes sense. Both are market-based solutions to more efficient allocation of resources, resources that are overused because they are underpriced. And road capacity is an expensive resource that gets used in drought-or-flood patterns. We have all kinds of off-peak surplus capacity, and we try to jam everything through during rush hour. Market pricing and market incentives can help manage this a lot better than the vastly more expensive solution of building more capacity.

This isn't any new information, but it's a good graphic that makes a common typology of people who ride bikes even more clear.

The @Massdot #SBL guidance is premised on designing for the "interested, but concerned" population as primary users pic.twitter.com/CUFF0hdTeQ
— Toole Design Group (@tooledesign) November 4, 2015

We have to be designing and constructing facilities for people on the left side, not the right side of the graphic.

Infill and some History

In the block bounded by 3rd, McNary, Elm, and Gerth in West Salem, there's a cluster of single-story infill housing, all of which have garages on the alley.

This infill development probably doesn't get enough attention as an example of slightly increased density that also puts cars in the right place.

What it replaced had been a question. And here's what looks to be the answer! 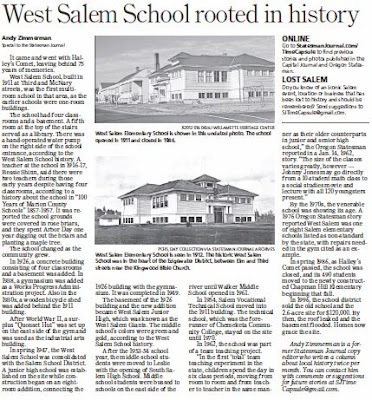 Email ThisBlogThis!Share to TwitterShare to FacebookShare to Pinterest
Labels: Advocacy, Drought and our Water Supply

Yikes! $120,000 for over 2.6 acres of land? The taxpayers were robbed! Why is it that public entities sell property at such a cheap price?

I guess I will need to check out the location. The City is considering new design standards for how to increase residential density in Salem by allowing in-fill of tri-plexes and duplexes within a single lot in a RS zone. They currently allow duplexes on corner lots of 7,000 sg ft only, but might decrease that lot size or allow them within the block instead. They are also looking at maybe reducing parking requirements for such units. Stay tuned as the process moves forward.

This part of West Salem is not prosperous, and it is possible that in 1996 that was actually a fair market value, or at least not so low as to be "robbery" as you say. It may not be possible to say for sure. It will be interesting to learn more about the tri- and duplex standards you mention.

A couple of other notes...

Over at SCV two additional comments:

- They rightly point out that "The City failed to meet many of the water conservation goals it set six years ago and it admits to leaking 23% of the water it treats, amounting to 1.2 billion gallons a year." This should have been the center of the article and not the water-shaming of residents.

- To that point another says, "So what is the point of publicly targeting these people by publicly posting their names, their addresses, a photo of their house, as well as how many gallons they used and the dollar amount they pay annually. I personally find posting their names, addresses in a public newspaper reckless. Yes, they may be water hogs but they committed no crime but they are being treated as criminals. Who next will be targeted and exposed publicly because they perhaps use too much gas and drive too many needless miles? Public shaming on this level is not an example of quality journalism IMO. I guess for me, investigative reporting is not publicly targeting law abiding residential water consumers, but more like, who is ignoring building codes, who is illegally polluting our waters. Bringing to light corruption within our government ranks. Racial profiling. etc. Issues with merit."

Finally, here's the MassDOT "Separated Bike Lane Planning & Design Guide" from which the graphic is taken. National advocacy chat suggests it is out in front of the NACTO "Urban Bikeway Design Guide" even.

I've often pondered about why Roger Geller's terrific work (and the subsequent discussion of his categories) uses the term "Interested but Concerned." Although that frame is better than the other common category term "Willing but Wary" (which sounds like they can be pushed into biking, reluctantly), I'm not sure it adequately portrays the desire of people to bike more, nor the inadequate state of the system today.

Were I to go back in time, I might encourage Geller et al to use something like "Desiring but blocked" - that is, people say they want to bike more, but they are stopped from doing so by the incomplete networks of substandard bikeways (and perceived dangerous speeding car and truck traffic) we offer.

Regarding the public shaming by The Statesman Journal, I would have to second the view that was stated in another forum: the article should have been about ineffective City policies on water use. If the City truly wants to conserve water, it should adopt graduated rates that don't impact the average residential customer but punish those that use "too much" water (reasonable people can disagree what amounts to "too much" water, but certainly the users named in the article would qualify). And if those users want to pay punitive water rates rather than conserve water, the excess revenue generated by the City can go towards repairing the water system. The article in The Statesman should have gone after the City, not the individual end users. After all, the City sets the rules of the game - the users are merely players.

It seems like the time is ripe for a new typology!

As Evan says, "interested but concerned" isn't as descriptive as it could be - but also, maybe it is too broad.

In important ways, the typology misses people of color, immigrants, and people who are dependent on bikes and do not also own or have easy access to cars. The model is shaped around a notion of people who can easily make discretionary choices whether to use a car or not. Other dimensions along which members of different groups experience interest in, and ease or barriers to biking are elided, and it's probably time for a richer, more complex model.