Over the weekend a reader sent in a note about a hearing on December 3rd regarding some changes to the ways Urban Grown Boundaries are set. 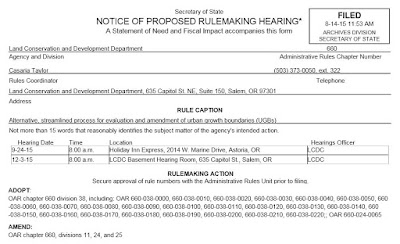 From the hearing notice:


The proposed new rules and rule amendments will establish an optional alternative, streamlined process for local governments outside of Metro to evaluate and amend urban growth boundaries (UGBs) and will implement related legislation enacted by the 2013 Oregon Legislature (HB 2254, codified as ORS 197A) which requires LCDC to adopt administrative rules establishing the new alternative UGB process by January 1, 2016. In addition, the new and amended rules will provide interpretive guidance to provisions at ORS 197A.320 that apply to both the existing UGB process described in OAR chapter 660, division 24 and the proposed new alternative process. The agency requests public comment on whether other options should be considered for achieving the rule's substantive goals while reducing the negative economic impact of the rule on business.

Maybe readers who follow UGB issues and LCDC matters can weigh in on what exactly this means. (From here this is opaque bureaucratic legalese, not at all intended for the general public to parse or have an opinion on.)

Probably it wouldn't merit a post here - except for one thing.

A chunk of the proposed Salem River Crossing is right now designated for an area outside our local Urban Growth Boundary. The City and ODOT are together pursuing an expansion to the UGB in order to accommodate this. The ever lengthening schedule of the process means that the SRC may be positioned to take advantage next year of a new "streamlined process" that would reduce "the negative economic impact...on business."

Without going full-on paranoid, this does at least make you pause a moment to go "hmm..."

It's possible that insiders think the new streamlined process would be advantageous for the Third Bridge effort. (It's also possible this is wholly a red herring.)

Here's the project site on the "streamlining" for more information and staff reports and proposed rule language.

The hearing is Thursday the 3rd, in the LCDC Basement Hearing Room, 635 Capitol St. at 8am.
Posted by Salem Breakfast on Bikes at 7:00 AM

When it comes to Salem "government", it is rarely a question of whether one is being paranoid - it is usually a question of whether one is being paranoid enough.
If I remember correctly, the matter of whether the "third bridge" could be built was determined, at Council, to be contingent upon the expansion of the urban growth boundary.
Putting aside any considerations of whether the bridge should be built, the Chamber of Commerce should, at the least, try to determine if there is sufficient funding to bring this pipe dream to fruition.
There has already been a great deal of research about potential sources of financing and none look very promising.
Tens of millions of dollars were wasted in the effort to create the Columbia River Crossing - a bridge plan that went nowhere. Millions have been spent promoting the third bridge.
Taxpayers will soon be asked to pony up for a new and expensive police facility. There is a limit to what voters will approve. The cost of the proposed bridge, which would primarily serve the state because it would be a part of the intrastate system, should not be primarily financed at the local level.
The continuing actions intended to set the stage for the bridge are an example of putting the cart before the horse. The ongoing actions should stop until there is a reasonable basis to believe that is can be paid for.
The Chamber and their cohorts at Council are acting in a way that will provide them with more leverage to get public approval. The argument will be that everything is in place and we already expended so many resources that it would be foolish to back out now.
Don't be fooled.