At the NACTO Conference - Other Weekend Newsbits

Hey, look, it's Gary Obery at the NACTO conference in Austin!

Some of you will know Gary from his work with the Salem Bike Boulevard Advocates - but he's also an ODOT traffic engineer focused on walking and biking. 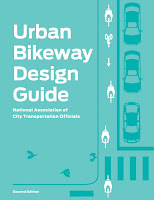 NACTO is the National Association of City Transportation Officials and last week folks were assembled at the Designing Cities Conference in Austin Texas. Peter Koonce, who tweeted the photo, manages the traffic signals for the City of Portland. (NACTO's focus is on bigger cities, and Salem would be too small for full membership. So it's not surprising that while ODOT might be represented, the City of Salem did not send anyone, as far as I know.)

NACTO has also put together the Urban Bikeway Design Guide and the Urban Street Design Guide, both of which are out in front of more traditional design standards like those from AASHTO, the American Association of State Highway and Transportation Officials, who have been and remain a primary cheerleader for hydraulic autoism. By contrast, NACTO is pushing towards notions of mobility that focus on people, not just cars.

As part of their recommendations for Oregon, after rating Oregon #5 for bike-friendliness, the League of American Bicyclists said ODOT should "adopt" the design guides. ODOT has "endorsed" it as something useful, but not incorporated it as part of standards in formal plans and policies. The lack of harder standards can be seen in some of the wateriness of the State's new biking and walking plan.

In Austin folks got to see things like a simple curb-separated bikeway.

Wouldn't something like this be great downtown!? That is what it will take to begin making biking downtown attractive to folks who aren't already doing it - and will give people a meaningful alternative to biking on the sidewalk, as opposed to the empty alternative they suffer right now.

And here's a two-way protected bike lane on a suburban two-lane collector-type street.

Here's a nice juxtaposition that shows why design matters. Though both streets lack sidewalks, one street is over-engineered to forgive speeding. It's too wide and there aren't visual cues to slow down. So neighbors probably put out "kids at play: drive slow" signs or forbid kids to play in the strees. At neighborhood association meetings they probably complain about speeding.

The other street is probably described as bucolic! Trees, too, are an important ingredient in the visual cues to slow down.

Great graphic by @TransPsychology we need to design our roads for the speed and behavior we desire pic.twitter.com/Tqa3IRl5I8
— Darren Proulx (@dnproulx) October 31, 2015 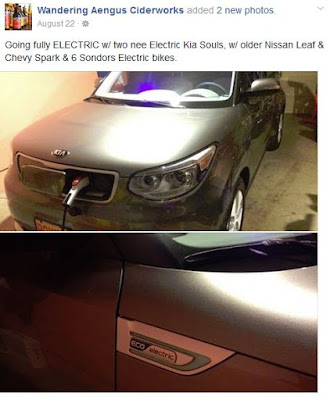 Earlier this summer you might have noticed that Wandering Aengus Ciderworks acquired an all-electric fleet. A little lost in the news was the set of six battery-assisted e-bikes.

Salem Weekly has a nice note on it this week.

The move was made, Carmichael says, because the company “wanted to decrease the amount of miles our employees drive in gas cars.”

New Meters on the Capitol Mall

Installation is nearing completion.
Posted by Salem Breakfast on Bikes at 11:00 AM

Yep, that was me getting ready for a tour of Austin's protected bike lane on 3rd Street, a demo of their GPS-based bike detection system, and a few nice paths along their riverfront. The NACTO Designing Cities conference was fantastic. Great speakers talking about streets serving not just a transportation role, but also a family health role, and economic role, a cultural role, etc. The last speaker reminded us that as "transportation officials" (National Assoc of City Transp Officials), we need to be "keepers of the culture" when planning street projects. A good example is the "bat bridge" in Austin where the bridge designers purposefully placed 1" slots in the concrete underdecking in hopes of attracting bats. It did not cost much but it worked; there are now 500K - 800K bats living under the Congress Ave bridge. There must have been a thousand people out on the bridge, in the park, and on several sight seeing boats waiting for the bats to come out last Thursday. What a cultural goldmine! Gary