After a little bit of delay, the draft West Salem Business District Action Plan is out. At least some of the delay was caused by a new analysis of an at-grade crossing of Wallace along Second Street and the rail alignment. But that turned out to be a bit of a dead end.

Most of the recommendations remain intact. The recent conversation did lead to a couple of other changes from the first concepts. But the most important concept for our purposes here, that of the undercrossing, is fortunately retained, however.

There's a new plan map. The changes at numbers 1 and 2, and a couple of other notes:

Among some merchants there was interest in an at-grade crossing of Wallace Road along the RR/Second Street alignment, but this appears to have been quashed by ODOT, who has great say because Wallace here is a State Highway. The City's posted the letters from ODOT disputing the benefits of an at-grade crossing, essentially repeating the case from 2008, when they opposed an at-grade crosswalk at the initial opening of the Union St RR Bridge.

For drivers on Wallace, an at-grade crossing exacerbates lane-change weaving, and impedes queuing and flow; and for people on foot and on bike trying to cross, an at-grade crossing offers more exposure to cars and traffic and is more dangerous. This is a case where the undercrossing better serves the unfortunate fact of Wallace being a high-volume stroad and state highway, and better serves people on foot an on bike with a much lower-stress crossing environment.

The downside of course is a serious loss of the path system on the west edge of Wallace Marine Park. But if this is the only way to get the undercrossing, then it would be unfortunate and disappointing, but in the end a reasonable compromise.

Maybe the most interesting new element in the plan is talk about the possibility of a new System Development Charge:

Of course, this should be extended to the idea of the Third Bridge itself! 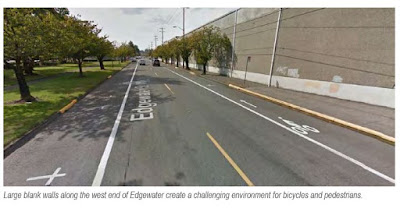 In the plan there's also a funny image and caption about Edgewater:  "Large blank walls...create a challenging environment for bicycles and pedestrians."

This, I think, fundamentally misunderstands the problem.

Blank walls are boring, lifeless, and rob the street of activity that would make it a "place" and create a structure that captures value for merchants and property owners.

Edgewater is actually not that difficult to walk. It's just empty, especially in that industrial zone between Patterson and Wallace.

Rather than the blank walls, what makes Edgewater tricky for people on bike is the speed of traffic, and the narrow bike lanes constantly in the door zone. The bike lanes especially fail the 8 to 80 test.

But Edgewater itself doesn't get much attention. Because of the shadow cast by the prospect of the Third Bridge, even though parts of Edgewater retain mid-century character and have great potential, about improving Edgewater itself the study mostly says ¯\_(ツ)_/¯ and chooses to focus elsewhere. That neglect and indifference is an indirect cost of the bridge.

Most of the other recommendations continue and extend those developed in the Edgewater Second Street Action Plan. Much of it is a move away from fronting the streets with parking lots and buildings set way back, and instead greeting the sidewalk with neo-traditional "main street" development of continuous building frontage and a variety of storefronts and windows. Second Street and the east side of Glen Greek between Wallace and the park come in for particular focus.

For all notes on the Edgewater District see here. These include notes on the undercrossing and West Salem Business District Plan, the Edgewater/Second Street Plan, and the Goodwill project on the corner. At the moment there are several moving parts, and I'm not sure everything ties up neatly quite yet!
Posted by Salem Breakfast on Bikes at 7:00 AM