Celebrate Earth Day with a March for Science

The paper's got a ringing endorsement of the March for Science tomorrow. That's nice to see. 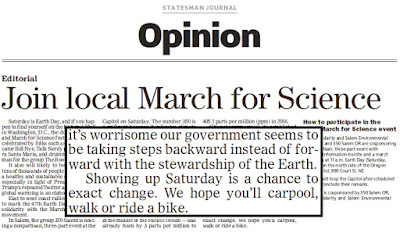 They write about the current administration's retreat from knowledge in their claim that "global warming is an elaborate hoax":


Almost five decades after Gaylord Nelson, a U.S. senator from Wisconsin who founded Earth Day and launched generations of environmental activists, it's worrisome that our federal government seems to be taking steps backward instead of forward with the stewardship of the Earth....We hope you'll carpool, walk or ride a bike.

Tomorrow on Earth Day, Saturday the 22nd, the March for Science will rally and march at the Capitol:


Various community organizations will be available to connect with at exhibitor tables. They will be around before and after the rally and march to allow marchers plenty of time to make those connections. Exhibitor hours will be 10:30-1:30

Afterwards, we will begin our 1.25 mile march, doing a loop and returning back at the Capitol.

At the Federal level right now, two senses of "know nothing" - as epistemology and as politics - are recrudescent and combine in a dangerous mix.

Here's an editorial from 1922. It's hard to say that history "repeats itself" exactly, but it sure rhymes.

Way back in the 50's a wave of secret society "patriotism." similar to that now deluging the land, swept over the nation to "preserve" it. It was known as the "American" party, but commonly termed the "Know Nothing" party, from the attitude of its members who when queried professed ignorance of the subject.

The Know-Nothing party took the form of a secret oath-bound organization and avowed hostility to the political influence of foreigners and Catholics in the government. It demanded the selection of none but native born American Protestants for office. The society was known as the "Supreme Order of the Star Spangled Banner" and exercised the secrecy and mysticism now practiced by its successor, the Ku Klux Klan, which has added the negro and the Jew to the list of the banned.

Starting in 1852, the Know-Nothing party had a rapid growth and aided materially in the disintegration of the Whig party. In 1855 the governors and a majority of the legislatures of Massachusetts, New Hampshire, Connecticut, New York, Rhode Island, California and Kentucky were elected by the new party and in 1856 it nominated Millard Fillmore for president, and while he carried but one state, Maryland, in the electoral collage, he received a popular vote of 875,000. But the movement subsided as rapidly as it had grown, the majority of its members going into the Republican party.

Political movements having similar objects have been sporadic in the United States from the first and it was to allay the discord and dissention they engender as well as preserve religious toleration and freedom of conscience that the constitutional guarantees were enacted. A similar political agitation swept over the country in the 90's and was known by the name of "A. P. A." (American Protective Association) which also was secret, and centered its opposition upon Catholics. Such movements have usually been strong est in states where there was the lease excuse for them states in which the Catholics were in hopeless minority.

Such a state is Oregon. The Know-Nothings had a rapid growth here, but were routed by Asahel Bush, who opened a strong attack and exposure through the columns of his paper the Salem Statesman, in 1854. He characterized the Know-Nothings as "the most ridiculous piece of bigotry, intolerance and stupidity grown persons were ever engaged in" and lived to see his prediction come true "that not a man of prominence or influence, belonging to the damning conspiracy in Oregon, but is doomed politically."

Similar movements have flourished since. In the 80's the "I. W. A." (Independent Workers of America) aimed against foreigners, but the Chinese in particular, aided materially in the election of Pennoyer as governor, but their attempts to regulate matters by direct action, brought them into conflict with the courts and prison sentences evaporated their patriotism. In the '90's the "A. P. A." cut a wide swath and the old anti-Catholic spirit had a political revival in Portland a decade ago, which culminated in the organization of the "Federation of Patriotic Societies" with the Orange lodges as back-bone, followed by the organization of the Ku Klux Klan as the controlling influence in the federation.

With the so-called compulsory school bill which was slipped over on the Scottish Rite Masons at the instance of Ku Klux members of the lodge, (but which there is no record of its having been endorsed by the Grand Lodge of A. F. and A. M.) as a rallying point, religious intolerance is again being capitalized by unscrupulous politicians in an effort to ride to power on prejudice, though there is no state in the union which is less threatened by foreign domination or by Catholic control than Oregon, and no schools anywhere more under state regulation and no private schools of better standing.

There is one unfailing result from sporadic efforts to commercialize fanaticism, and that is that the common sense of America sooner or later asserts itself and damns to political oblivion the false prophets who have led the people astray. The old members of the Know-Nothing party, like the leaders of the A. P. A.'s spent the balance of their lives trying to live down their part in the appeal to intolerance, and the same fate awaits those today leading the hosts of the secret societies and trying to destroy religious liberty, deprive parents of inalienable rights, and make children the wards of the state, that the unscrupulous may ride to power.