Council meets on Monday, and the lead item is the debate on ride-booking regulations. The Staff Recommendation is to move forward with the ordinance process and schedule a Public Hearing on April 24th.

Just in time for us, a PhD candidate in Denver has published a study on ride-booking's effects on the local transportation mix.


Ride-sourcing companies like Uber and Lyft add tons of traffic to Denver and Boulder streets, and make the transportation system less efficient by cannibalizing transit, biking, and walking trips. That’s according to a study by Alejandro Henao, a PhD candidate at the University of Colorado....

About 34 percent of people surveyed said they would have either taken transit, biked, or walked instead of using the car service.

Council should be very cautious about adopting a regulatory scheme that encourages ride-booking to cannibalize transit, biking, and walking, in addition to harming local taxi companies and inducing more auto traffic. Seriously, where are the municipal benefits? 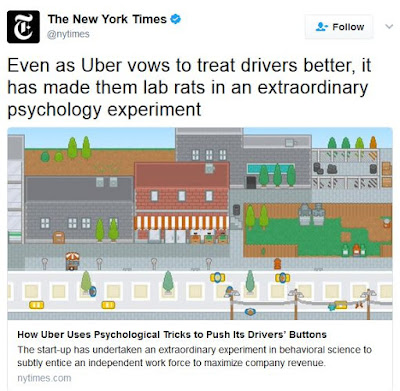 As for fairness, there was another article, this one on the use of "psychological tricks" and an extended "experiment in behavioral science" to pressure drivers, who may not notice ways they are being manipulated and the employment experience gamified.

Other than that, there's nothing new to say. See previous notes and the argument against too-liberal regulations for ride-booking here. In general terms, there are clear costs to ride-booking that our tech-bro utopianism and consumerism are badly trying to erase or externalize, and cities should not want to embrace this trend uncritically. The shiny and new is not always the good.

Room-booking is also on the agenda.


The Ordinance Bill No. 5-17...updates both the Unified Development Code (UDC) and the City’s licensing regulations (SRC Chapter 30) to make it easier to operate limited, small-scale, short-term commercial lodging while establishing development standards and licensing requirements to promote safety, neighborhood compatibility, and greater fairness between this newer form of short-term lodging and traditional hotels and motels.

Maybe it's only because this is a transportation blog, and so the matter of TNCs is of great interest, but even though the whole Airbnb thing is cognate in so many ways with ride-booking, it also just hasn't seemed as important or as harmful. Neighbors want to make proprietary claims on "their" on-street parking, and worry about the (free) parking supply. There are also concerns about absentee landlords and the loss of housing stock as it might be shifted from longer-term rentals to short-term rentals. If you have followed the issue closely, you might have sharper observations. From here the City's proposal seems reasonable.

While we need new housing, at sites like this it will be totally car-dependent. Our whole scheme of siting and partially subsidizing new housing on greenfields on the edges of the Urban Growth Boundary is a policy bundle that needs revisiting.

One of the streets inside the development could also get a relatively novel treatment. According to the approvals:

The uphill bike lane/downhill shared lane combination would be new. I don't think we have actually done this anywhere yet. (Do you know anywhere this has been implemented?)

In the report on Adminsitrative Purchases, there is a $35,000 line item to Confederated Tribes of the Grand Ronde for the art and history project on the Minto Bridge. Unfortunately, there is nothing yet public about this. It would be nice to hear more about this! There's also $250,000 for replacing the Clark Creek culvert under Summer St SE. It's an interesting moment of accidental traffic calming on a ruralish, unimproved road that doesn't connect to much, and might be an example of a street that would not benefit from sidewalks and curbs and a full upgrade.

And of course, there is formalizing the election and the swearing-in of new Councilor Hoy.
Posted by Salem Breakfast on Bikes at 10:15 AM

Uphill only bike lanes are common in Seattle. For example:

And here's another study from New York City that finds TNCs add vehicle miles traveled, add trips, and add congestion. They have also reversed the "transit oriented growth" in "non-auto travel" from 1990 to 2014.

"A continuation of TNC-led growth in travel is not a sustainable way to grow the city."

From "Unsustainable? The Growth of App-based Ride Services and Traffic, Travel and the Future of New York City."

WWeek reports the bill at the Legislature is dead.

"City Hall was not pleased with the company's efforts to pass state legislation. Portland Mayor Ted Wheeler criticized the legislation as the city launched its Uber investigation, and Commissioner Dan Saltzman went to Salem to testify against the bill last month.

'When Uber came to Portland, they ran over regulators and consumers, and after we established basic community standards they tried to do an end run around the city in Salem,' says City Commissioner Nick Fish. 'They are chronic bad actors, and I'm pleased that this bill is dead.'"