Yet More on a Bolt-on Footbridge over Wallace at Edgewater

Several readers have emailed or commented to say "the Edgewater path is great!" and that  a footbridge across Wallace at Edgewater bolted onto the OR-22 ramp and berm system would solve a great problem in connectivity for West Salem. 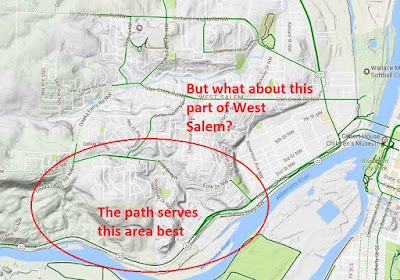 They are not persuasive. Not yet, anyway. Here's why.

We recently learned that the Crooked House Bistro is closing  and will transform into something else. But that's just the kind of destination along Edgewater a person might want to bike to.

But some of the destinations will be in the flat, close-in grid, or nearer to Glen Creek.  Once the lead abatement process is complete and they finally open, Xicha Brewing on Patterson will be an attracive summertime destination. Some folks might even like to work through residential areas from Orchard Heights instead of going along Wallace. All these destinations would be better served by a Second Street connection than by the Edgewater path connection.

As the Edgewater path is currently configured, whom does it serve?

There are at least two dimensions to consider: Stress tolerance, and trip-end destination.

And by these, the Edgewater path does not score as highly as some of its proponents might like to think.

Two readers have proposed variations on a set of connections from the railroad path. One that would connect to Taggart, where there is a traffic light and something of a crossing, and another to Musgrave, which connects to the Center Street Bridge path system and the crosswalk at Edgewater. These, it is thought, would largely eliminate the way that the railroad path just dead-ends at Wallace and at least provide some help with crossing Wallace. 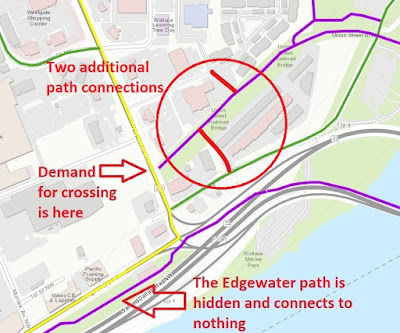 These are projects that should be pursued independently of either a Second Street undercrossing or a bolt-on footbridge. They would be helpful no matter what and would be valuable as stand-alone projects.

It's true that an underpass has some of the same problems with visibility and comfort. The example of the literally crappy conditions of the Portland Road underpass at the railroad has always been the strongest argument against the Second Street undercrossing concept. Design would be so important to ensure the undercrossing is safe and comfortable.

Expense has also been an argument. But the $30+ million estimated cost also includes the bloated Marine Drive connection, and it's not been publicly clear that a scaled-back undercrossing for local traffic only would be so expensive. The initial cost estimate was $8 million, not $30+.

If it remains true that the only financially possible way to make a crossing is for the bolt-on footbridge at Edgewater, then these things should be included. Unsurprisingly, a couple of them represent variations on concepts discarded during early stages of the West Salem Business District Action Plan, and deserve a revival:
More thought needs to be given to the whole network and system, and not just to the supposed sufficiency of the Edgewater path itself. Some people will happily go out of their way to use an overpass/underpass in order to avoid the stress of Glen Creek at Wallace. Will this Edgewater alignment be a way that kids can reach Wallace and Riverfront Parks? There are lots of questions still.
Posted by Salem Breakfast on Bikes at 6:00 PM