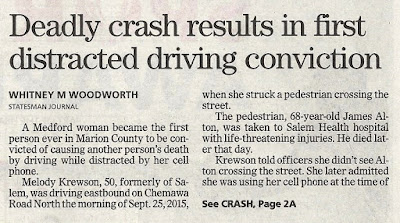 While uploading photos from her phone to a cloud application a woman was also driving, and struck and killed James Alton as he attempted to cross Chemawa Road in Keizer.

A kind of justice was served: She could have been sentenced up to 10 years in prison with a $250,000 fine, but her plea agreement requires 180 days of community service, three years of supervised probation, and her drivers license was permanently revoked. 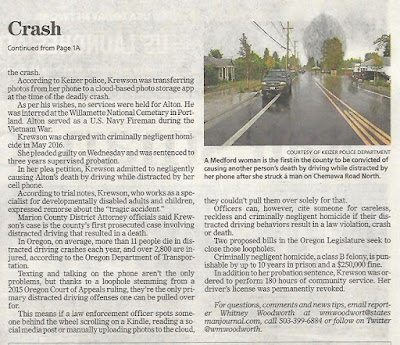 But there are several other notable subtexts.

The first: Even for a careless cause of death, no prison time is involved in the sentence. It's just too easy to kill people by car, and socially we accept it too easily.

The second: You've probably seen a spate of articles about distracted driving, as if that mainly was to blame for the increase in death. But this doesn't exactly square with something in the piece:


In Oregon, on average, more than 11 people die in distracted driving crashes each year, and over 2,800 are injured, according to the Oregon Department of Transportation.

If Oregon had 467 deaths, and careless drivers killed only 11 people, that's 2% or 3% of deaths. Maybe it's the driving itself that is lethal, not so much the distraction.

If we want to reduce traffic violence, we need to reduce rates of driving, trip lengths, and speeds. Even at 30mph, the slightest driver error is lethal half the time for a person on foot. There may be no "safe" speed in a car. Driving is always and everywhere a "dangerous instrumentality."

Consistently, we try to normalize a "safe" level or "safe" kind of driving, and try to displace blame onto non-drivers and bad drivers.

There is evidence instead that driving is inherently dangerous, and humans insufficiently perfect to be drivers. Even the best of drivers will crash and kill or be killed.

Third, from the initial Keizer Times piece about the crash:


"An older gentleman was crossing the road and walked right in front of the pickup,” [Lt. Andrew Copeland with the Keizer Police Department] said from the scene. “There was nothing criminal in nature. The guy didn’t make it.”....

The investigating police were quick to absolve the driver and to blame the person on foot. They showed clear bias! Statements before the crash investigation is complete should be more neutral. And we should not presume drivers are more likely to be innocent than other road users.

This is a textbook example of autoism, and shows why advocates are often skeptical of claims that too quickly seek to absolve drivers of blame.

It took over a year for the facts to surface, but nearly every statement by the Keizer Police was in error.

This is why we have to be very careful with statements like "she was driving lawfully...when the pedestrian just [suddenly appeared]." Too often they are not true.
Posted by Salem Breakfast on Bikes at 8:30 AM

Linguistic leniency and judicial leniency go hand in hand. What you call autoism,I call windshield bias. Lots of it on display here, most notably with the driver instead of the victim being cast as deserving our sympathy.

I'm on a Twitter campaign to call out reporting that transfers responsibility for crashes from motorists to vehicles, also a blatant form of windshield bias. "Pedestrian struck and killed by car" should be "Driver strikes and kills pedestrian." The hashtag is #DriverNotCar. This automatic exoneration by reporter needs to end.

Here's a fuller definition of autoism, for readers who might be curious: "What is Hydraulic Autoism? Why it's our Mobility Paradigm!."

Our journalists here still too often remove the driver as agent and write these stories with practically autonomous cars just as you say. "Pedestrian struck and killed by car" etc. Fortunately, there is more movement on the accident/crash shift in rhetoric.