Half of Bush's Pasture Park Deeded in 1917

After some negotiating and rewriting, later that fall in 1917, the City did accept the donation, and about half of today's park was committed. It took another few decades for the Park formally to become public, but in a way, the charter for Bush Park - as it seems most often to be known today - can celebrate its 100th anniversary this year.

A theory here is that Asahel Bush was not a very nice person and that his influence and power shaped Salem in ways that were not always for the good. His nickname was Ass-a-Hell, after all! Unfortunately, this is mostly speculative since there is little official history of Bush, his business enterprises, and his legacy.

One of the nominees for this year's David Duniway Lifetime Historian Award is Barbara Mahoney, who has probably done more work on Bush than anyone else.


Mahoney is a historian whose interest in Oregon began when she moved to Salem with her family in 1976. She has contributed a number of entries to the Oregon Encyclopedia and is the author of Dispatches and Dictators, a biography of Oregon Native Ralph Barnes, who was a foreign correspondent in Europe in the 1930s. Her next book, The Salem Clique: Oregon’s Founding Brothers, will be available later this year.

Her article, "Asahel Bush, Slavery, and the Statehood Debate," was in Oregon Historical Quarterly a few years ago, and talks about Bush's sympathies for the South and for Slavery, even when he was more-or-less for the Union. A pro-Slavery Unionist, he was complicated!

She's also the author of the Oregon Encyclopedia article on Bush. It's all about the politics around Statehood, the Salem Clique, and his newspapering, which ended in 1863. The rest of his life through 1913 is hardly touched on! It gets the last, short paragraph in the piece:


Bush sold his newspaper in 1863 but remained an influential force in Oregon politics. He later co-founded the Ladd and Bush bank, the first in Salem. Through his life, he served on a variety of boards, including those of Willamette University, the University of Oregon, and the Lewis and Clark Centennial Exposition. He was a delegate to the Democratic National Convention in 1892. Bush died in 1913.

As you see, nearly all of the research is around Statehood and the Civil War. As much as Bush was a central figure in Salem history, we know very little about his work, influence, and effects in the 50 years from 1863 to 1913. Bush was a major figure in the Gilded Era as it touched Salem, in politics, in railroads, and in banking, and there is little published about that.

The main way that citizens today know Bush is through the park named after him and his house, built in 1878 while the country was still digging out of the Panic of 1873 and the resulting depression. But perhaps because the park operates partially as an ingredient in a gauzy and nostalgic civic hagiography, we don't have a  very good history of Bush's Pasture Park either.

The Salem online history says only:


The Bush property remained in private, family ownership until the 1940s, except for some acreage deeded to the city as public parkland in 1917....

In the late 1940s, the City of Salem acquired the land from two of Mr. Bush's children, A. N. and Sally Bush. When Mr. Bush first acquired the land, it was outside the city limits but as the years passed it became a central portion of the growing City of Salem. The estate was coveted land and the Bushes were offered a high price from a Seattle developer who planned to demolish the house and subdivide the land. The Bush family preferred to sell the estate to the City for a much lower price. They specified that the area be named "Bush's Pasture Park" in honor of their father.

A City of Salem history sheet says a little more:


Mr. Bush donated the 57-acre eastern portion of his estate to the City in 1917. Bush's intent for the area was that it be used for park and playground purposes. A bond issue to purchase the upper 43 acres, with the historic house and barn, was defeated by Salem citizens in 1945. The following year, voter approval to purchase the site was given only after Willamette University agreed to purchase a 9-acre athletic field in the center of the park.

But it appears the acquisition was more complicated and probably more interesting! The project seemed to have started publicly in the winter of 1917 - though it probably was talked about before that. Son A. N. Bush offered a 57 acre parcel to the City as a memorial to his father.

The first set of conditions were not wholly acceptable, and it would be interesting to learn more about just exactly why.

A piece from June describes the difficulties as "ambiguities," but did not specify or analyze them.


By the fall, things were worked out, and the paper published a summary of the conditions.


BUSH PASTURE DEED WILL BE SUBMITTED TO COUNCIL

Some Changes Made As To Conditions

Must Be Maintained Intact

The Pasture consists of 57 acres in the heart of the city and is deeded to the city subject to the following conditions with the proviso, "upon the breach of any one of which by the grantee or its successors, it shall be come null and void and the title shall thereupon revest in the grantors, their heirs and assigns."

No Streets or Railways.

No streets, alleys or thoroughfares are to be laid out or permitted to be laid out across the land, according to the second condition. This reservation does not apply to park walks or park drives.

The third condition of the deed is that the city pledges itself that no franchise shall be granted for any kind of a rail road or street railway on or across the land, or over or along any street leading to the land in such a manner as to permit a right of way to be across the pasture.

The city of Salem agrees to pay the costs of all improvements of walks, drives, boulevards and other ways within the boundaries of the pasture and also that the cost of the up keep of the same shall never be a charge against the property abutting the park. This is the fourth condition of the deed.

The fifth condition reads as follows: "The purpose of this gift is to create Bush's Pasture and to maintain the original tract owned by the said Asahel Bush at the time of his death as one compact body during the lifetime of Miss Sally Bush, and such is the consideration of this conveyance." Conditions are included by which the property reverts to the grantors should the conditions not be adhered to.

The sixth condition states that it is the intention of the grantors that the boulevard shall meander in the main 50 feet from the base of the hill which in a southeasterly direction crosses the original place referred to in the description of the land. The entire park and boulevard are to be included on the lower land and none of the land on the hill is to be included in the deed.

There's a desire path in the 1936 image running diagonally southeast, and perhaps this is the alignment of the proposed boulevard. I wonder how much the path answers to the requirements of a "boulevard."

On October 1st, the deed was accepted and the gift formalized.

It would be interesting to learn whether the threat the park might revert to heirs "upon the breach of any one of these [conditions]" is part of the reason we have not had a good investigation into the way that Bush and his heirs shaped Salem history. Some of the new research on Elizabeth Lord and Edith Schryver has related to their relationship with Sally Bush, but little has been published. All in all there is mystery around the Bush family and their place in Salem history!

The SJ picked it up yesterday for a Sunday column. 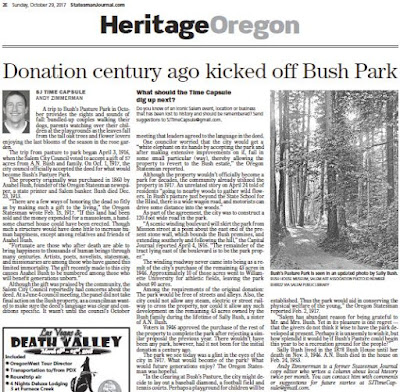