Over at Strong Towns in a note "Cargo Cult Planning," they observe sarcastically that free parking isn't going to save us:

On Thursday the 20th, the nascent Salem "Main Street" project is going to have something of an Open House at the Ike Box. 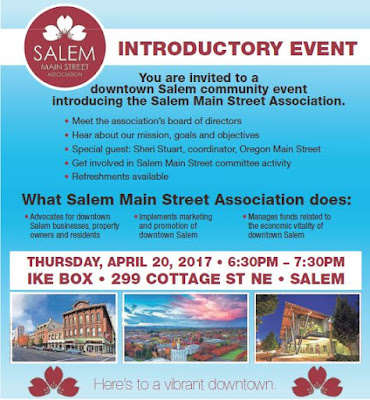 Unfortunately, our autoism and its two main downtown theses are probably the biggest barriers to a real main street and its benefits:
Both of these are almost certainly false, and we've had nearly a half-century of downtown struggles to prove that. Yet we cling to both of them, insisting on a policies for copious "free" parking, and for downtown streets that have more car lanes than the Interstate.

Over at SCV a couple of recent threads exemplified this. Here's a typical comment from one:


We aren't going back to the days of horse and buggy, how is the business going to attract ppl. If only walkers and bicycle are only accessing the stores.? We have four lanes for the reason stated in article, it doesn't get congested for that reason. If you have cars looking for a spot to park on left and right side that frees up the two lanes to FLOW.

One of these days - maybe not this year, but sometime! - the absurdity and self-consuming nature of these will become apparent.

The Main Street concept has great utility, but in order for it to accomplish anything of magnitude, it requires modifying our attachments to autoism.

Without that, it will be more cosmetic than structural and enduring.

The Open House is from 6:30pm to 7:30pm on Thursday the 20th at the Ike Box on the corner of Cottage and Chemeketa.
Posted by Salem Breakfast on Bikes at 12:01 PM