Schools: Board Candidates at SCAN, Safe Routes at Legislature Wednesday

There are a few interesting meetings tomorrow, on Wednesday the 12th. Schools figure significantly in two of them.

Are you in Rep. Evans district? He's on the House Committee for Transportation Policy, and they are conducting a Hearing on the Safe Routes to School bill in the morning. 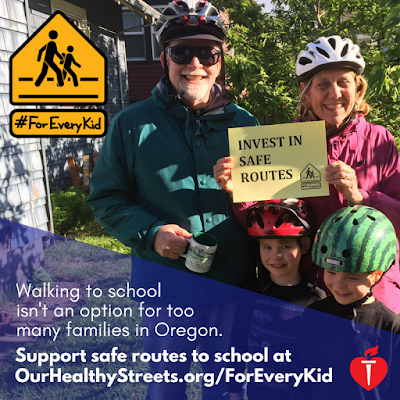 From the Street Trust:

What are we asking for on Wednesday?


Another significant bill on the agenda for Wednesday is HB 2682, which would enable Portland to set lower speed limits on some streets without the cumbersome ODOT process, which requires ODOT approval on local decisions for neighborhood streets. This will also make it easier to enact "twenty is plenty" local speed limits on bikeways and other walking streets. Unfortunately other cities are shying away from this, but if Portland can pilot it and show results, other cities may want to join in. (BikePortland has more on the compromise and sausage-making.)

Here are the committee members from the Street Trust. Let them know you value safe walking and biking to school and support local control of speed limits.

SCAN meets on Wednesday evening and they're featuring the School Board election:

Though we don't much wade into political races here (please, no personal remarks in the comments!), one of the candidates is on the record opposing bike lanes. It's not likely she'd be much of a fan of Safe Routes to Schools, either. So that seems important to note.

SCAN will also get an update on homelessness:


Homeless Issue - Sarah Owens and Michael Livingston from CANDO on whether Salem, Marion & Polk Counties should reorganize as its own local coordinating committee

CANDO has been running an in-depth series on homelessness, and it's worth a read.


The Budget Committee will hold a Public Hearing on April 12, 2017 to consider recommendation of the Capital Improvement Plan (CIP) to the City Council. The CIP provides information on planned capital projects for the next five years.

The road project list doesn't seem to have changed - though it looks like a TIGER grant on McGilchrist is quite unlikely, as that program is not included in the current Federal budget proposal. It's hard to see how that really belongs in the CIP.

Also it's worth saying again that auto users are heavily subsidized; the gas tax pays for very little in our road construction budget. The City should do a better and more forceful job of communicating how roads are funded here. Most of the funding is coming from sources that are not directly related to road use.

There has also been some talk about Marine Drive, and it's not clear how this fits into the CIP. But that might be something to watch as the Budget process continues.
Posted by Salem Breakfast on Bikes at 12:01 PM