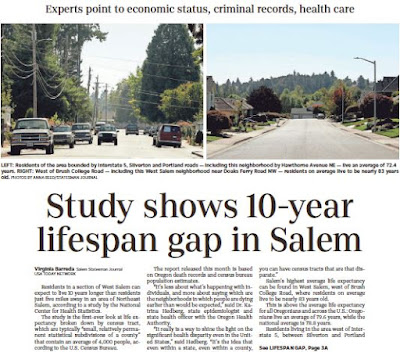 In no small part because we are in the midst of an historical moment, this piece on different life expectancies in Salem may not get the attention it deserves. But dynamics about power and status and wealth are also in play.

The SJ article cites "Tract 51, the area between Senate Street NW and Wallace Road NW in West Salem has a life expectancy of 72.1 years" as the lowest life expectancy in Polk County. You can see that area in lime green as the gridded portion of the West Salem flats with 33% "very low income."

The area in Marion County with the lowest is "Tract 5.02, the area west of I-5 between Silverton Road and Portland Road NE, which has an average life expectancy of 72.4 years."

There are multiple factors, of course, but highways and roads are implicated. In West Salem there is OR-22 and Wallace Road. On the east side, there is the triangle formed by I-5 and Portland and Silverton Roads. These highways are both a cause and consequence and then reinforcing factor in the problem. They are barrier, depress investment, and contribute to pollution. It's a bit of a vicious circle.

We don't try very hard to break it. Big projects like the Salem River Crossing would help mainly those who already enjoy a higher life expectancy and would harm those who must suffer the lower life expectancy. Even though we have a veneer of "environmental justice" analysis, it is not very deep and does not adequately account for different impacts.

Maybe as we update the Comprehensive Plan we can give more visibility to all this, and perhaps the SJ, Salem Reporter, or Salem Weekly will want to take a deeper dive.
Posted by Salem Breakfast on Bikes at 12:01 PM

So, I notice that from living in East Salem area for 30 years compared to now living in West Salem for almost 10 years that one difference between the two is that almost no one rides their bicycles in the West Salem area due in no small part to the hills. And while a lot of people walk their dogs in the evening or early mornings, not many people are actually walking to a destination in West Salem.

In East Salem you see lots of people walking, riding the bus and riding bicycles. I am sure this is for economic reasons mostly, but the area is also flat, so it is much easier to bike or walk to the store or another business.

Yet in West Salem with more dependence on cars, we live longer than the people in East Salem. So, I am going to attribute it to factors like better health care, earlier retirement, less stress from worrying about not enough money and lower crime rates.

That said, research has proven that by adding trees and more open spaces where people can recreate life-expectancy is increased.

I would love to see more study done on the factors that go into producing better health effects, because Salem is undertaking the Comprehensive Plan review and one of the rumors is that they will be looking at increasing the urban density. If we do not counter sneezing more people into smaller spaces, with other factors like open spaces then we might just be moving in a negative direction in terms of longevity of our population.

re: "one difference between the two is that almost no one rides their bicycles in the West Salem area due in no small part to the hills...[and] not many people are actually walking to a destination in West Salem.

In East Salem you see lots of people walking, riding the bus and riding bicycles...the area is also flat, so it is much easier to bike or walk to the store or another business."

(But of course it is true, as you point out, that the gridded flats are better suited to biking than the loop-and-lolipop hills. That's a different matter than the proximity of highways to many areas with lower life expectancy, however.)

My husband has taken to walking from the Doaks Ferry area to Wallace Road. I am bothered not only by the fact that there are no sidewalks on most of the north side of the street that he insists on using, but that this is the only direct route, and it is the most used by vehicles. He has bypass surgery and to me it is very counter productive to walk where there is so much traffic, pollution and yes, particulate. I think I am right that walking is healthy, but walking on the street is dangerous and walking where there is heavy traffic is unhealthy.

There was a study done by the US Forest Service a while back about the value of urban trees. They noted that trees not only improve the air by absorbing carbon dioxide, they take some of the particulate out of the air and store other pollutants.

"URBAN AND SUBURBAN TREES HAVE DIRECT BENEFITS FOR RESIDENTS
Backyards and parks with trees seem to satisfy a deep need in the human psyche, perhaps because they are similar to the landscape where the human species originated. Street trees too are valued for the beauty and coolness they bring to neighborhoods. But trees can do so much more. On the psychological front:
• Trees and nature relieve what is sometimes called “nature- deficit disorder,” the malaise caused by excessive time and focus indoors, particularly when there are no views of the outdoors through windows. Studies of students and hospital patients show improved learning and healing in rooms with a view of nature.
• Some trees and green areas can increase neighborhood social cohesion and reduce crime.
• Some trees produce allergenic pollens and messy fruit, but smart management picks the best species to enhance the positive and reduce costs.
On the biochemical, physiological, and physical fronts:
• Trees release oxygen (O2) and store considerable amounts of carbon (C) in their wood.
• Tree leaves intercept sunshine and UV rays. Transpiration and shade cool the air.
• Tree leaves absorb lower-atmospheric ozone (O3) and other pollutants.
• Leaf surfaces intercept and trap small-particle pollution; some is washed off onto ground surfaces, some is caught up in leaf surface waxes.
The production of oxygen and storage of carbon are direct benefits of photosynthesis. But the UV rays and pollutants that are intercepted have direct ties to human health. Some ultraviolet rays in sunshine can cause skin cancers and cataracts; high temperatures can bring on heat stroke. Small particles, ozone, and other pollutants worsen chronic respiratory diseases such as asthma, bronchitis, emphysema, and chronic pulmonary obstructive disease (COPD) and can bring on acute cardiac and pulmonary incidents, possibly leading to premature death. These problems affect about 1 in 7 Americans middle-aged or older according to a new study from the National Center for Health Statistics at the Centers for Disease Control and Prevention."