The City published results from an annual survey this week, and the readings of it seem a little odd, misunderstanding greater precision than the survey actually offered. 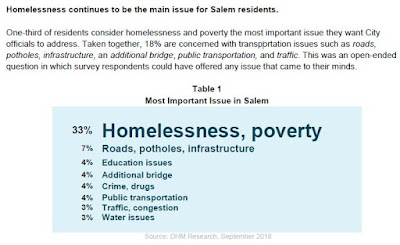 In the report the City published, the survey consultant writes


Taken together, 18% are concerned with transportation issues such as roads, potholes, infrastructure, an additional bridge, public transportation, and traffic.

The paper echoed this:


The survey found residents consider homelessness and poverty to be the top issues they think Salem's elected officials should address (33 percent), followed by transportation issues such as roads, infrastructure, potholes and adding an additional bridge across the Willamette River (18 percent).

Both formulas are misleading, and the SJ's especially so.

The additional bridge share is 4% as "most important," not 18%. The figure of 18% came from 7% + 4% + 4% + 3%, the sum of:
It is more illuminating to say that Public Transit and an Additional Bridge poll equally urgently. Moreover, if the margin of error is nearly 5% that's a total error bar of 10% on either side of the reported value.

And "fix it first" is a value meaningfully different from "solve traffic congestion." To conflate them and add them together conceals more than it reveals. Sure, both involve "transportation issues," but they have different valences.

It is also interesting to compare results to previous years:

Some of the other data is suspect.

83% of people say it's easy to walk and bike in Salem?

Maybe walking, but not biking.

Those numbers are difficult to square with an 83% satisfaction rating.

Survey writers could probably zero in on more specific critique. Overall it does not seem specific and rigorous enough to discern real problems, real successes, and real values and priorities. It is too superficial and prone to back-patting or complaint.
Posted by Salem Breakfast on Bikes at 8:00 AM

Yes, there's a lot of noise in a small survey sample. Let's all concede on that.

But maybe (just maybe) people are noticing that there are more opportunities for both recreational and non-recreational biking when they see projects like the Minto-Island bike/ped bridge, the crossing treatment for bikes at Commercial Street and Union, bike lanes downtown on High and Church, etc. And maybe they are answering that there are more opportunities for easy biking for others, if not necessarily themselves. (I would answer that more playgrounds equate for a higher quality of life for the community, even though I don't use the swings and slides myself.)

What you are saying could be true in a way, but what it amounts to is an argument about symbolism: By planting these flags - Minto Bridge, High/Church bike lanes, Union St crossing, and the Geer Park facility you don't mention - Salem is doing a better job of signalling it looks like a place that should be good for biking.

And if biking in Riverfront, Minto, and Geer Parks is increasing, which is possible, because those facilities are real and useful, the survey is insufficiently granular in distinguishing between on-street and off-street biking.

But wouldn't it be more helpful to know - these are made-up numbers for the moment - that 60% of Salemites think it's easy to bike in our parks, but only 10% to run errands or go to work?

This is the more important takeaway, that the survey doesn't tell us anything meaningfully specific, and will be used to spin overbroad conclusions.

Especially because Salem has historically tried to displace biking from the street to parks, if the "approval rating" is really about parks facilities, it should be identified as such and not passed off as some general approval about bicycling.

I was one of the people who got to answer this survey.

A few observations might help with some of your questions about validity.

First, the questions were such that you had to pick for a long list, but could only name one or three in some questions. If you were being asked a long list of what you think is most urgent, I can see homelessness getting more responses than potholes.

Second, they never asked to explain our answers or suggest items.

Third, it seemed like some of the questions were geared more to what would you be willing to pay for, rather than what do you want most.

Finally, the person that did my survey was not English speaking so it was hard to understand some of what they were asking.

On another topic, I heard a very interesting presentation by Public Works staff about sidewalks and why it is taking so long to get repairs and improvements. Might be a topic for some research and a blog.

Susan - I'd be interested in seeing or reading the presentation you mention. If possible, could you ask Public Works to post it on the city's website and then mention it here (or let the B.O.B know about it to create a new post). Thanks.